Teenagers spend a lot of money. The 35.6 million teens in the United States are accomplished multi-channel shoppers and notoriously fickle, so marketing to them is a challenge. Luckily, this age group is a favorite subject of consumer researchers and a good deal of recent data exists to gauge the current trends.

Investment firm Piper Jaffray recently published the results of its twenty-fifth semi-annual survey and report, “Taking Stock With Teens.” The report says that 70 percent of teens prefer to shop at their favorite stores online. Teens are shopping more via the Internet and brick and mortar outlet stores and less at specialty stores. The study found that parent contributions to teen purchases have dropped, both at the upper and middle-income levels. Teens have to come up with more of their own resources, which may account for teens shopping less at pricier specialty stores. Parent donations decreased by nearly 10 percent from the previous survey, but a majority of teenagers report that their parents still subsidize more than half of their spending.

In the spring 2013 survey, 79 percent of teen females and 76 percent of males stated that they shopped online. That represents a 4 percent increase for females over fall 2012, but a 6 percent decrease for males. While clothing remains the most frequently purchased items by teens — 21 percent of all expenditures — they are spending less on fashion items. Besides apparel, electronics and footwear are the most popular online shopping items. In these two categories, men do more shopping than women. Overall, teenagers spend a disproportionate amount of money on clothing.

Over the past year, according to the Piper Jaffray survey results, the top three websites for teens were Amazon, eBay, and Nike, with Amazon growing ten percentage points between spring 2012 and spring 2013 — from 13 percent to 23 percent. Teens also enjoy visiting the websites of brands that provide products targeted to teens.

Facebook and YouTube are still the favorite social media sites for teens and 53 percent of females and 52 of males indicate that social media impacts their purchases, with Facebook being the most important. However Facebook seems to have lost influence over the past six months, with only 33 percent of teens reporting it as the most important social media influencer in the spring 2013 survey compared with 42 percent in the fall 2012 survey. Instagram and Twitter are picking up the slack and anecdotal evidence exists that teens are moving to Tumblr and Reddit — although the Piper Jaffray survey did not show evidence of this.

The cell phone is the primary access to the Internet for 25 percent of those between 12 and 17 years of age. Forty-eight percent of teens own an iPhone and 58 percent own a tablet according to the Piper Jaffray report. For those who own a smartphone, 50 percent use it as the main method of accessing the Internet.

Teens are seldom disconnected from their mobile devices so it is best to customize websites for mobile users. Mobile devices are used for browsing, buying, looking for coupons, and checking in with friends to get their views.

Teens are brand conscious but not necessarily brand loyal. Friends, whose opinions they value, heavily influence buying behavior. Peer approval of purchases is very important, especially to girls. The Piper Jaffray report states that friends had the most influence over teen purchase decisions and about 50 percent of both males and females said social media influenced them.

Shopping is a core social activity for teenaged girls who are more likely to be swayed by celebrities than boys. “The Teenage Girl as Consumer and Communicator,” a 2010 report from Euro RSCG Worldwide PR, showed that teenaged girls are shrewd shoppers with more than 60 percent waiting for items to go on sale before making a purchase. Seventy-seven percent said they are more likely to buy a reduced price article than one at full price. 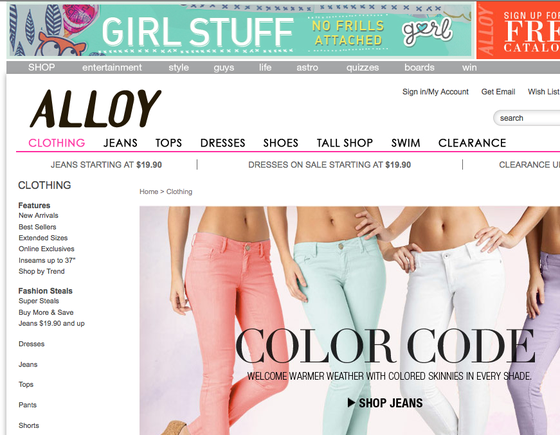 Teenaged girls are shrewd shoppers, often waiting for items to go on sale before purchasing.

Other findings from this study are as follows.

Teens have short attention spans, especially regarding advertisements. They filter out a good deal of the messages and are often doing several other things while shopping online, especially if they are on a mobile device. To keep them engaged, ask for their feedback or give them an opportunity to express their preferences. Messaging that is concise, transparent, and has a point is necessary to garner their attention.

It can be time-consuming to keep up with the changing inclinations of teenagers but they do have substantial purchasing power. It’s worth the effort.