“On Windows, you might have to root around on a website to find an .exe file to download or go to a store and buy a CD with the software on it.” wrote Rickford Grant and Phil Bull in their recent book, Ubuntu Made Easy, A Product-Based Introduction to Linux.

“You’d then run the installer and click through a seemingly endless procession of options and questions before it decides to start installing your new application. On Mac OS, you might have to do something similar, although perhaps with a little less hassle. …Software installation works differently on Ubuntu.”

Just like there is an app store on Apple or Android phones (remember that Android is based on Linux), Ubuntu has a software center with more than 60,000 applications — most of which are free — that users can typically download and install with a single click and password confirmation.

The Ubuntu Software Center can be accessed from the “Launcher” that typically appears on the left side of a new Ubuntu installation — at the time of writing, Ubuntu 12.04 was the most current release. The Software Center icon is a shopping bag. 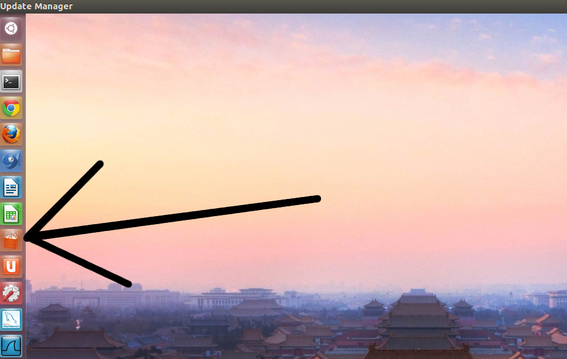 The Ubuntu Software Center may be accessed from the Launcher.

The Software Center works very much like an online store, with items — in this case software — that can be browsed and downloaded.

Users may search for software from the search bar at the top right corner or by category at the left. For business users there are plenty of productivity-oriented programs to choose from. 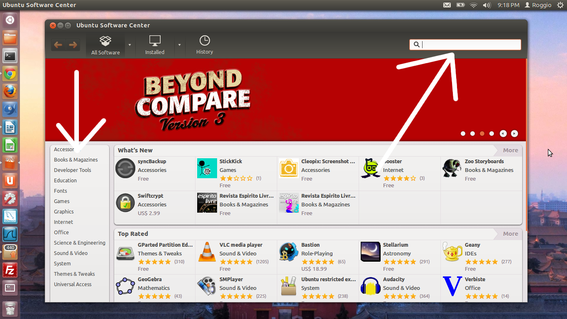 It is possible to either browse or search for software on Ubuntu.

Ubuntu can also download several programs at once (really one right after the other), so that users may click liberally adding software.

Most of the software available on Ubuntu is free to use for personal or commercial purposes. This is largely due to the Ubuntu’s (Linux’) origins in the open source community. Although open source does not necessarily mean free, the two often go together, and this was even truer a few years ago.

However, there is still some commercial software available. To find the commercial software, simply click to display the dropdown menu next to the All Software button in the Ubuntu Software Center. This menu includes the link for software that may be purchased. Downloading this software does require the additional steps of setting up an account and making the purchase. This is very good for users.

“When you buy a commercial application through the Software Center, the purchase is recorded and kept with the details of your Ubuntu single sign-on account,” wrote Grant and Bull in their book. “If you ever need to reinstall Ubuntu, or accidentally uninstall an app that you bought, this means that all is not lost — you can easily reinstall any of your purchased applications.”

The system underlying the Software Center is called the Advanced Package Tool or APT. This system may also be accessed through the Linux terminal. This system looks on known servers called repositories for the software and its dependencies.

Although, it is a bit more advanced, APT can be set to check additional repositories, expanding the number of available programs beyond the 60,000 listed in the Software Center.

Ubuntu is an operating system like Microsoft Windows or Apple Mac OS X. For some business owners, Ubuntu’s Linux distribution is a good alternative to proprietary operating systems.

The Ubuntu Software Center makes it very easy to add software, much of which is free, to the Ubuntu desktop.