As an example, Walmart’s Savings Catcher, which monitors local advertising circulars and matches competitors prices, is “a must-have app for many shoppers,” according to comScore’s “2015 Digital Future In Focus” report released March 26, 2015.

Walmart’s Savings Catcher is seemingly designed to help in-store shoppers feel more confident about the prices they pay for products in Walmart stores.

Shoppers who have downloaded the app to their smartphone can scan a special barcode on their Walmart receipts. The app will then compare the items on the receipt to a database of nearby competitors’ advertised prices. If the app finds a lower price for any of the items, Walmart pays the difference. 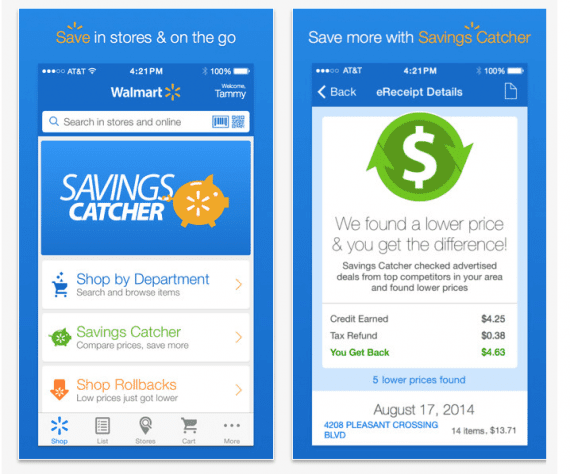 In addition to making customers more confident, the app is a sort of pseudo loyalty program, since Walmart is collecting data about a particular user’s purchase habits and has access to information about the user through the app. In theory, Walmart could make special offers to app users, further boosting sales.

There are many more examples of brick-and-click retailers using mobile well.

Management and digital strategy firm iVentures Consulting recently reviewed 111 retailers’ ecommerce and mobile user experience as part of its “Eshopper Index 2015” report. The firm found that 91 percent of sites reviewed had a mobile optimized version; 51 percent of the retailers had an iOS mobile app; and 37 percent of the merchants in view had an Android mobile app.

The top five mobile features offered, according to iVentures, were:

Some retailers were offering improved features, according to iVentures, including:

Given apps like Savings Catcher and other retail apps, it would seem that brick-and-click retailers have figured out that mobile is a channel to both sell products electronically and provide information and services that will increase in-store sales.

In-store Sales May Help to Explain the Mobile Commerce Gap

There is also conjecture that in-store sales may explain, at least in part, what some describe as the mobile commerce gap.

On the one hand, mobile usage in up significantly.

“For the past few years, U.S. smartphone penetration has been growing at approximately 10 percentage points a year and reached 75 percent penetration of the mobile user base at the end of 2014,” the comScore Digital Future report said.

What’s more, “mobile now accounts for 60 percent of digital retail engagement as measured by time spent,” again according to comScore.

On the other hand, mobile commerce is not producing as many sales as one might expect.

Although there are certainly other factors, it may be that some of the difference between expectations and actual mobile commerce sales may be the fact that shoppers are using mobile devices to help with in-store purchases.

To further explain how or why mobile devices may be boosting sales in physical stores, it can be helpful to remember that shoppers use different devices for different activities and at different times.

Think about your own mobile usage. When are you more likely to use your phone’s camera? When you’re sitting at your desk or when you are out?

Similarly, if you are at home, which device are you most likely to use to shop: a smartphone, a tablet, or your laptop?

Mobile may be more powerful for brick-and-click retailers because shoppers are more likely to use a mobile device when they are in-store or on the way to a store.

Be Useful to Shoppers

Retailers with physical stores may have been a bit slower than sellers like Amazon to adapt a mobile strategy, but many of the leading brick-and-click retailers now seem to be making good use of smartphones and tablets to boost sales.

Interestingly, these retailers are not necessarily doing anything Earth shattering. Rather almost all of the mobile features being used are simply things that are useful to the shopper.

Walmart’s Savings Catcher is little different than many retailers’ price-matching policies, except that it does the work for the shopper rather than requiring the shopper to manually monitor circulars.

Any retailer — brick-and-click or pure-play ecommerce — developing mobile strategies would be wise to focus on utility too.