Nate Kennedy grew up in Logan, Utah. The oldest of 10 children, Kennedy’s desire to earn money came from watching his grandparents, who owned a golf shop, go bankrupt.

His business partner Rick Steele grew up in Ohio. Steele was entrepreneurial at an early age, to help fund his baseball card collection.

Both college dropouts, when they met on a golf course in Phoenix, Arizona in 1998, they clicked.

By April 2003, they were alarmed about the impending sub-prime loan disaster.

“Banks were lending up to 125 per cent of the property’s value. We knew the mortgage balloon would pop,” Kennedy said.

They realized if they could use search engines to drive traffic and convert mortgage leads, they could market anything.

The pair had bought new homes. Annoyed at the cost of window coverings, Steele took this as an opportunity and signed up to be a reseller of blinds with a manufacturing facility in Texas.

This lead to SelectBlinds.com, which Steele and Kennedy launched in June 2003.

“There just weren’t the carts in April 2003 we have today; we built the site [and cart] from scratch,” Kennedy said.

He sketched the wire frames of how the website would flow and gave them to an engineer friend to design.

“For 38 days I sat across from him as we built the site together,” Kennedy said. 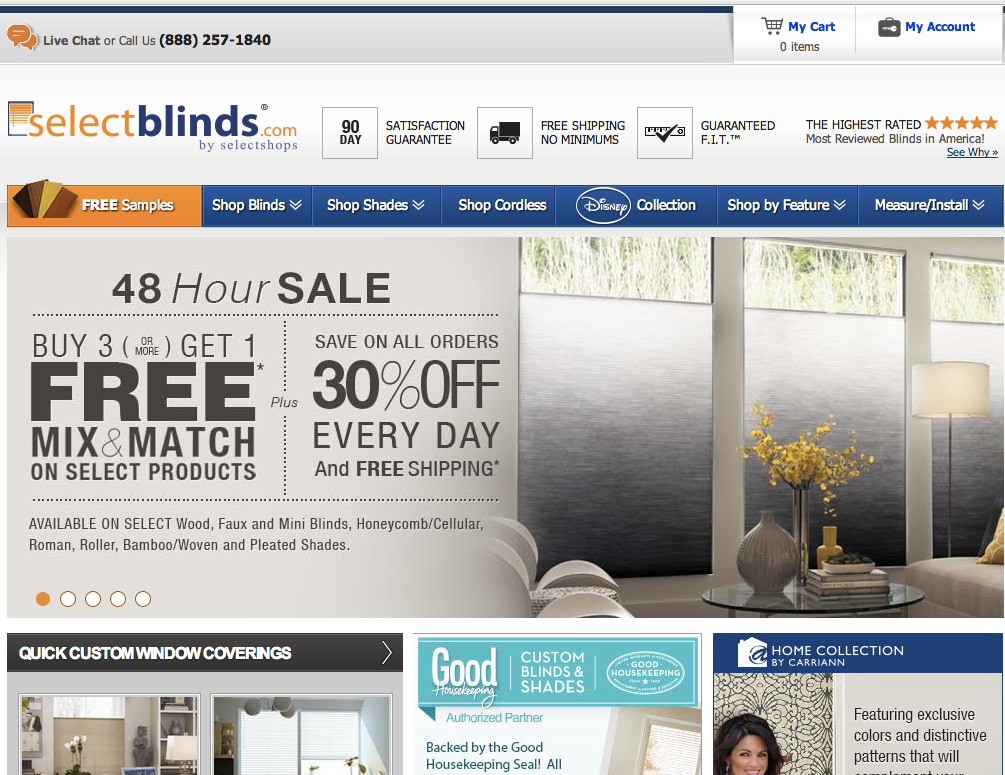 Steele and Kennedy launched Select Blinds on a pay-per-click strategy, with a daily budget of $2,000, taking four orders the first day.

Shoppers could request free samples of the material being used to manufacture the blinds. For the first 60 days Kennedy remembers handling orders, customer service questions over the phone, and cutting sample swatches on a band saw.

Select Blinds’ manufacturer told Kennedy to visit another site that was selling its products and copy descriptions from there.

“It took a week for that company to serve us with a cease and desist. We spent about three days rewriting content and never made that mistake again,” Kennedy said.

While Select Blinds’ website uses the same design architecture and order processing flow as was created 10 years ago, the site has had multiple facelifts — with more to come in 2014.

“Too many times our payment processing system broke down so our customers couldn’t checkout. Don’t be cheap: downtime can cost thousands of dollars a minute,” Kennedy said.

Select Blinds added its first full time customer care agent in late 2003, and then a second one in 2004. In 2005, it added three more. Today, the company has 60 staff (29 of whom are customer care members) working from corporate headquarters in Mesa, Arizona.

“When we moved in 2013, we began automating customer care responses, tracking emails, and order processes moving electronically through email rather than faxing orders to the manufacturers,” Kennedy said.

“We also added a live chat option which was very addictive. Rick and I would log in, helping answer questions for customers,” Kennedy said.

The pair outsourced their SEO to several companies but couldn’t get the results they wanted.

Kennedy hired the company’s first SEO specialist in 2010 but it was not until 2013 before he found the right person.

“Through 2011 and 2012 we held the number one organic spot for most of the terms we wanted, but 2013 has been turbulent to say the least,” Kennedy said.

Select Blinds operates on a drop-shipping model. It holds no stock; instead, its suppliers bill Select Blinds with freight included.

“We do, however, ship all our sample requests through USPS and use FedEx for overnight shipping,” Kennedy said.

Select Blinds’ products are mostly assembled and shipped in the U.S., though some of the components are sourced from overseas.

“In 2014 we want to use a more robust accounting system that can eliminate manual reconciliation and help us reach $100 million in revenue in the next couple of years,” Kennedy said.

“We’re behind the curve here but social media is going to be the new form of advertising in the very near future,” Kennedy said.

“It is a Pinterest for home decor. We are negotiating a national advertising deal,” Kennedy said.

“We had a bad habit of spending the money as fast as it came in. We put off paying our suppliers to upgrade our offices with nicer furniture and equipment. We learned a harsh reality. You can only spend profit, not revenue,” Kennedy said.

The pair hired a CEO experienced in managing money and growth and made him a partner, with a large stake in the firm. In turn, he has made them profitable.

“For example, he set up agreements with our manufacturers that we would pay them early to get a one to two per cent discount on our bill,” Kennedy said.

In 2009 Steele hired Efficient Frontier, a digital marketing firm since acquired by Adobe, to help manage pay-per-click ads on Google, Yahoo and Bing.

In 2010 Select Blinds partnered with Mercent, a platform for multichannel sales, to manage its feeds for shopping websites like PriceGrabber.com, Buy.com, and Shopping.com.

“We saved money here, too. The key to making these relationships successful is holding the third party accountable for results and not accepting excuses for failures,” Kennedy said.

Today, Select Blinds’ customer care team makes up about half of its employees.

The company’s growth has been dramatic as it expanded its customer care team from one full-timer in 2003 to 29 in 2014.

“In 2007 we outsourced our call center in Sioux City, South Dakota to offer 24/7 service and to out-do our competition,” Kennedy said. “Outsourcing our customer service was one of the worst decisions we made.”

Surprisingly, there was a demand for around-the-clock customer service, but the company lost daily contact with its customers.

“It took us eight months to realize we could not identify and fix problems as they came up and we did not hear about the small issues people were having,” Kennedy said.

In October 2004, the show was shooting an episode in Gilbert, Arizona. Steele’s father obtained the name of the producer.

“Rick told them we wanted to be involved and the producer invited us to sponsor the show,” Kennedy said.

“It cost about $250,000 annually. That single decision allowed us to jumpstart our growth and pushed us to the front of the market.”

The episode aired in early 2005. The house was in Santa Fe Springs, California and Select Blinds was the sole window coverings supplier for the show.

“We promoted that TV show partnership on our pay-per-click ads and on our site, which helped fuel our massive revenue increase,” Kennedy said.

Select Blinds achieved number 373 in the 2007 Inc. 500 Fastest Growing Companies list and debuted the same year in the Internet Retailer 500.

“Our dream to become a successful company without any venture capital has become reality. Rick and I are living proof that the American dream still exists,” Kennedy said.