Mobile Commerce: Better to Create an App or a Mobile-optimized Site?

As an increasing number of mobile users access the web, merchants may be unsure exactly how to react. Should they build a mobile optimized site, design and submit an app to be approved by the Apple App Store or Android Market, or something else?

Mobile users have different web needs than laptop or desktop users. For one, their searches tend to differ from desktop and laptop users. According to a 2005 study conducted by Google, Columbia University and Carnegie Mellon University, mobile users perform less overall searches because it takes them more time to enter information on a mobile keypad.

It has become much easier to enter information quickly on a mobile keypad than it was in 2005. Yet many mobile users can still become frustrated with the tedious navigation and slow loading of traditional web pages. Many retailers and media companies are opting to design mobile websites to appeal to increasing mobile traffic.

It is difficult to determine whether or not having a mobile-optimized site affects search rankings. Using popular search keywords via Google on both my iPod Touch and MacBook, I noticed that sites seem to have the same rankings on both devices for the keywords I selected. (Google itself has a mobile-optimized site, with the organic search results rendered for easier viewing on mobile devices.)

Search “electronics,” and the highest-ranked site is Best Buy, which has a mobile version. So does Sony, which comes in at number two. Number three, RadioShack, has only a traditional site.

Using the wildly popular keyword “shoes” yielded similar results. Number one is Shoes.com, which has a mobile site. Zappos is number two with no mobile. Sites ranking even lower do not seem to have mobile versions.

So it seems that while searches are ranked the same on both devices, most top-ranked sites have mobile versions. The question is do they rank highly because of their mobile optimization, or do these large retailers dominate their competition in both organic SEO and mobile development?

Google would not provide specific details on how it ranks mobile content, but spokesperson Jake Hubert responded to our question as to whether a mobile optimized site can boost rankings on searches.

“Google uses more than 200 signals to determine the rank of a website,” Hubert said in an email. “We’re constantly iterating to refine our algorithms to surface the most relevant web content.”

Stephan Spencer is vice president of SEO strategies for Covario, a leading SEO software and services firm. He is also the for Practical eCommerce. He says, “It’s not likely that the existence of a mobile-optimized site affects the rankings on Google’s main web search. But the signals that Google’s web search utilizes are ever expanding. Perhaps Google engineers will find that site owners who make the effort to create a mobile site for their visitors are more trustworthy and important, and thus more relevant.”

“Unfortunately, in reality, mobile sites (which offer a much better user experience to the handheld user) don’t, as a rule, outrank their main site counterparts in Google mobile search or the Google mobile iPhone app.

“Another example: ‘fox news’ returns the main site, the iphone.foxnews.com site and foxnews.mobi sites are indexed in Google but rank nowhere on pages 1 or 2.

“So the way to ensure you are serving your mobile site to the right device is for your main site to do user-agent detection and to serve up the corresponding version that is optimized for the type of device detected (e.g. iPhone, Blackberry, etc.)”

Spencer concludes by saying, “Mobile-optimized sites used to have a small advantage in Google mobile search. However, as devices have improved in displaying regular, non-optimized pages on mobile interfaces, perhaps Google sees less reason to give any rank priority due to that factor.”

Mobile-optimized Works on All Devices

Whether or not mobile optimization affects rankings, there are some benefits to putting a mobile-optimized site as a higher priority than designing an app. MobileCrunch blogger Scott Merrill predicted early this week that mobile web may outpace apps because mobile sites are accessible to all mobile users and do not require downloads or approval from app stores.

The bicycle company Trek is a good example of making the mobile web a higher priority than apps. Repeating the same dual-device keyword experiment for “bicycles” ranked Trekbikes.com number one, the only bike manufacturer with a mobile site on the first page of rankings. 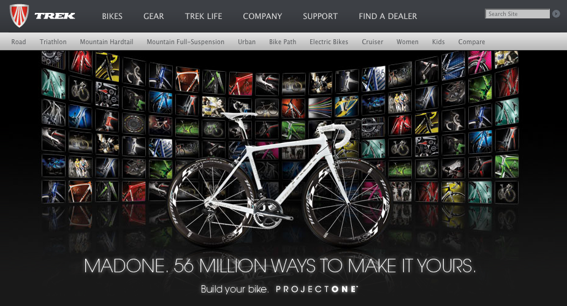 Trek manufactures everything from full suspension mountain bikes to the type of featherweight carbon racing bikes preferred by Lance Armstrong. It has made full use of optimizing Trekbikes.com for iPhone and iPod Touch.

Trek spokesperson Sam Foos said many bicyclists do use apps as tools for measuring distance or bike specifications, but the company made the web its first mobile marketing priority. 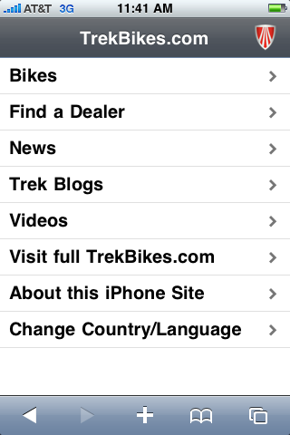 Screen capture of Trekbikes.com home page from an iPhone.

“We created an iPhone-optimized version of Trekbikes.com because it was simpler and had wider reach than offering an app with similar functionality,” Foos said.

Not to mention that by opting for mobile optimization instead of building an app, merchants can avoid the approval process for getting their app into the App Store. Anecdotal evidence found on numerous Mac developer forums indicated this process could take as long as two business weeks, and Apple can always reject the app if it does not follow its rules. One blog attempts to catalog the many ways an iPhone app can be rejected.

Time will tell which of these strategies will prove to be more useful for ecommerce merchants. For now, many large retailers (Best Buy, Amazon and eBay to name a few) have chosen to do both. Small businesses may not have that option.