Last week, Mozilla released a new version of its Firefox 4 Beta for Android and Nokia Maemo-based mobile devices that is reported to be more than twice as fast as the devices’ native web browsers.

Earlier versions of Firefox for mobile have had some challenges with stability and performance relative to other mobile-specific browsers. Mozilla has also delayed the release of the new version of its desktop browser, which seems to be giving mobile adaptation a much more important role in the development process.

The new Firefox 4 Beta promises to provide faster web browsing; a better user experience thanks to more responsive panning and zooming; improved JavaScript rendering, which should also lead to faster page load times; and even better support for HTML5. 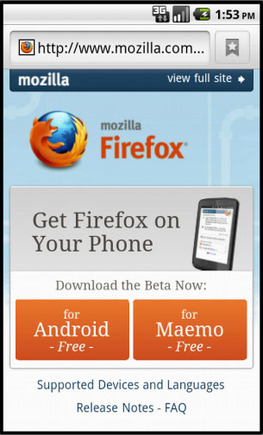 Navigate to Mozilla.com on a mobile device to get the new Firefox 4 Beta.

For example, there is improved support for Android keyboards, including third-party hardware keyboards that may be part of an Android base station. There is new support for uploading files, and, Firefox 4 Beta for mobile adds a “Save as PDF” option to the menu.

This “Save as PDF” option might be particularly helpful for ecommerce since it can be difficult for mobile shoppers to print out order confirmations. With this new feature an organized mobile shoppers can simply save the checkout confirmation page as a PDF, transferring it to an SD card or otherwise send it to a desktop system for safekeeping.

The new mobile Firefox also allows users to load add-ons, which are browser extensions, without restarting the browser. This is a significant improvement over the previous versions, which could be annoying where add-ons were concerned.

Online retailers and site owners may also find that new developer-friendly features in the mobile version of Firefox 4 will allow them to add more interaction or features to the mobile optimized versions of their web pages.

For example, the new beta supports HTML5 local storage APIs that when used well can make websites, even Ajax-driven ones, perform better on a mobile devices, which do not always enjoy the same kinds of bandwidth as a desktop computer.

The browser also supplies sites with Android orientation options, so that a site may, for example, update the layout depending on which way a smart phone is turned.

Mozilla, which has been working on Firefox 4 for more than a year, seems to be putting a lot of work into the mobile version of this browser. This effort could be an indication that Mozilla believe that mobile web browsing will continue to grow.