One Merchant’s Experience with LivingSocial and Groupon 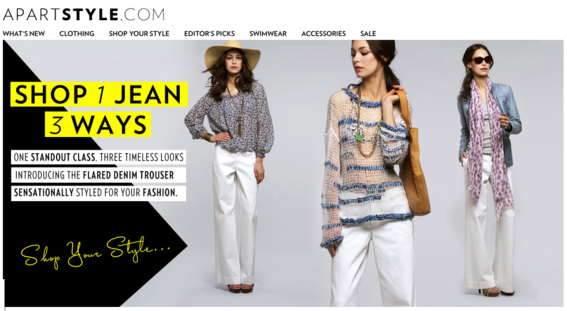 APARTStyle.com is a retailer that is focused on selling affordable fashion clothing to working women. The company — founded in September 2009 and headquartered in New York — sells clothing manufactured by APART International, a German apparel brand. APARTStyle.com recorded roughly $2 million in sales during 2010, its first full year of operation.

“We spent the first four or five months doing various types of online advertising — PPC [pay-per-click advertising], SEO [search engine optimization], banner ads — as well as print media,” said APARTStyle’s CEO Murat Goker. “We realized we were going to burn through a lot of money, and that it was not going to be the best way to for us to get exposure and build brand awareness. So we cut a majority of dollar buys in advertising to focus on social media advertising via Groupon and LivingSocial.” 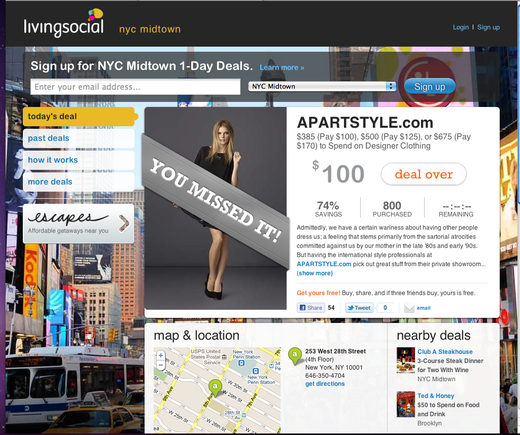 “The idea here was not profitability,” said Goker, “but was a way to influence the customer to buy the larger voucher value so that APART Style products would take a larger chunk of a customer’s closet.”

Here is how it worked. Within the copy of the LivingSocial email promotion, there was a link to the APARTStyle.com website. Also, the title of the promotion read “APARTStyle.com.” Traffic to the website, therefore, resulted both from clicks on the link as well as people typing the domain name into their browsers directly.

When visitors come to the APARTStyle website for the first time, a pop-up appeared containing a special offer along with a request for the visitor’s name and email. Due to the increase in traffic, APARTStyle experienced from the promotion, there was an immediate increase in the number of email subscribers, Goker shared. On a normal day, APARTStyle gets about 100 email addresses added to the database. However, the company experienced several times that due to the LivingSocial promotion.

According to Goker, “The increase in sales came as a result of follow-up marketing efforts through our own email offering special promotions – a 20 percent discount, for example. The exception to this was for the 850 or so who purchased the vouchers. APARTStyle refrained from targeting them with email promotions for a month or two. Ones who did not purchase vouchers, but provided their emails — were the ones we target.”

APARTStyle’s showroom in New York is normally used for wholesale buyers, only. However, because LivingSocial required that the initial promotion be to a physical location, APARTStyle temporarily converted the wholesale showroom into a retail space. It included a “style consultation” as part of the promotion, as well. Goker says that LivingSocial will now allow his company to launch subsequent ecommerce-only promotions, since he first offered one to a physical location.

“This was the first deal we ever did that offered a dollar value to shop in our showroom while being helped by our in-house stylist. So style consultation was the main selling point here,” stated Goker.

“We normally experience a 1 percent conversion rate on our website. Thanks to the exposure gained from the LivingSocial promotion, combined with our own email marketing efforts, the conversion rate of sales on the website increased to 3 and 4 percent over the two months following the promotion.” 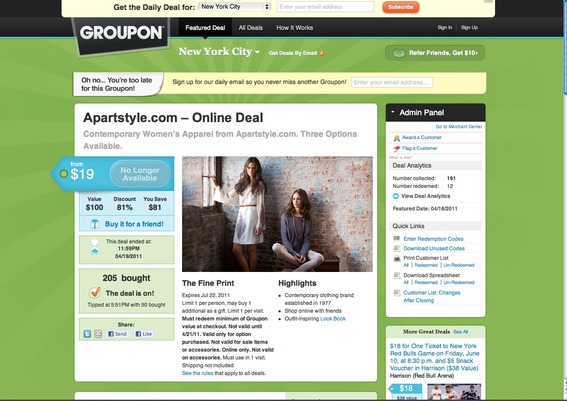 Based on its experience with the local promotion, APARTStyle launched a similar promotion in April 2011 using Groupon that focused exclusively on its ecommerce channel and targeted Groupon’s New York City subscribers. (Groupon does not disclose the total number of subscribers.) Total visits from the promotion to the APARTStyle website was approximately 12,000 and total sales was $30,000, half of which APARTStyle paid to Groupon in commissions.

Conclusions on Use of Group Coupon Deals 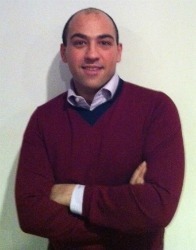 Goker says that his company doesn’t typically offer deeply discounted deals as it did with the LivingSocial promotion. He said, “At the end of day, we would have had to spend the money to bring traffic anyway. The benefits to using group coupon deals were the residual effects — number of emails acquired, both from those who purchased the deal and those who gave us their information in the pop-up – and increased traffic to the website.

He continued, “As to profitability, we are in the startup acquisition phase. Profitability comes later. Right now, it’s impossible to be profitable because the focus is on acquiring customers. We did lose money with each voucher, primarily due to commissions of LivingSocial and Groupon, which can be as high as 50 percent of sales. However, as you work with these companies on a longer term, you can negotiate lower commissions. The rewards of increased traffic and sales subsidizes the discount, and you make your money back over time, just as with any form of advertising.”

He sees both good and bad aspects from group coupon promotions. He summarizes the benefits as increased traffic to the ecommerce website, immediate cash flow, low-cost acquisition of customers and new email subscribers, as well as increased brand awareness.

Goker defines the liabilities by saying, “You better be ready and capable of fulfilling the traffic of customers. Also, there needs to be a well-thought-out customer acquisition plan to turn these habitual voucher shoppers to becoming a valued customers.”

When asked would he repeat the use of group coupon deals, Goker said, “Yes, we feel that this is a great way to increase the awareness to APARTStyle.com.”