Most sectors of the retail economy do business on the Internet. That now includes pawn shops. We recently spoke with Don Battis, CEO and founder of Pawntique.com, a web-only pawn shop that serves all of the U.S. from its base in New Hampshire.

Practical eCommerce: What is Pawntique?

Don Battis: “Pawntique is an online pawn shop. There are 12,000 pawn shops in the United States. But there are only a couple of us who are trying to transfer that business model to the Internet. Basically, we help people solve their short-term cash problems by loaning them money using their personal items as collateral. If they really don’t want these items back, we’re willing to buy the items from them. So it’s really adapting the business model of a pawn shop — that’s been around for a long time — to the modern Internet.”

PEC: Give us a little bit of background on Pawntique. In particular, where are you located, when were you founded and who owns the business?

Battis: “The business is owned by my family and me. We launched it last September. Our family has been in the business of making small loans to businesses, and small real estate investments, for some time. We fairly recently developed the capability of Internet marketing. It occurred to us that this might be an opportunity for us to combine the two things that we do: loaning small businesses money and Internet marketing. So we launched Pawntique as an upscale online pawnshop last September. We’re physically located in Portsmouth, New Hampshire which is on the sea coast of New Hampshire, about 50 miles north of Boston.”

PEC: Let’s talk about how the process actually works with Pawntique. And let me give you a hypothetical example. You’re in New Hampshire. I’m located in Colorado. Let’s say I have a guitar that I want to pawn and I find your business, Pawntique, online. What happens after that? I contact you. I’m interested in you pawning my guitar. How do you know how much money my guitar is worth? How do I get the guitar to you? How do you get the money to me, that sort of thing?

Battis: “Well, it’s funny that you would conjure that up as an example because we actually did a pawn loan a few weeks ago with someone who was a musician in Colorado Springs. He had a 1966 Gretsch Tennessean guitar in its original case. That’s somewhat of a rare item. He saw our website and emailed us a description of it and he wanted to know if we would loan him $2,000 against it. We looked at the pictures and saw an instrument that was well played, but still in good condition. We have a network of people that we turn to for expert appraisals. We get their opinions; there is a guitar blue book, which is an online database of used guitar prices, and of course there’s eBay. We were pretty sure that if we had to sell it, we could get $2,500 or $3,000, so we were pretty comfortable loaning him $2,000 using this as collateral.

“So we had him send the article to us. We sent him —at our expense — to his local UPS store, where they packed it up safely, and he overnighted it to us. We checked it out and made sure that it was what everyone said it was, and I think we wired the funds to his bank account that same day.

“So what happens is, there’ll be no payments due for three months and at the end of three months, he’ll redeem it, pay off the loan fee, and we’ll send it back to him. Or if he wants, he can just pay the fee and we’ll roll over the loan for another three months and keep on going. So that’s pretty much the way the process works.”

PEC: And he physically sent his guitar to you.

Battis: “Yes. It’s a kind of amazing thing. It’s a real leap of faith for someone to take a valuable item and drop in a FedEx envelope and send it off to us, somebody they’ve never met before. So our website puts a lot of effort into trying to explain who we are, and all of the due diligence which someone should do before you do business with a stranger. We try to provide all that information. But as in any business transaction, trust plays a big part in the whole process.”

PEC: In that example, what do you charge? Does that translate into an interest rate?

Battis: “In this case it would be 6 percent per month. So the $2,000 cost him $360 for the three months. It sounds like a high interest rate if you annualize it, but pawn loans generally aren’t for long periods of time. They’re usually because someone has a severe cash problem and they’ve got to solve it. They’re willing to pay what it takes to get the money to solve the problem and then get out of the loan.”

PEC: In the guitar example, why wouldn’t that person go to a pawnshop in Colorado Springs?

Battis: “Well, the pawnshop in Colorado Springs is liable to charge him 15 to 20 percent per month. They also may not have offered him as much money as he needed. We felt very confident, based on our appraisal. But someone else might not have valued it the same way and not have made him as good an offer. A lot of the smaller shops don’t have access to the resources that we do.”

PEC: Can you accept pawns from any state? You’re in New Hampshire.

Battis: “Yes, we can. The transaction takes place in New Hampshire, and we’re governed by the New Hampshire laws.” 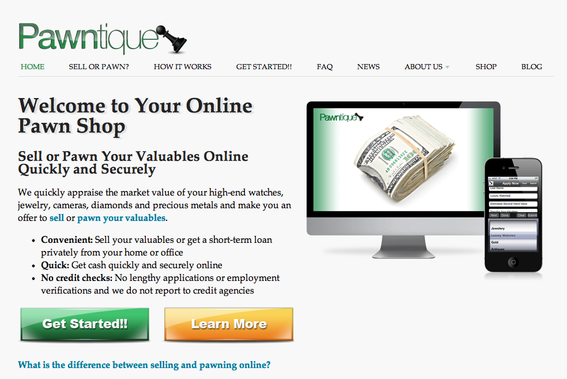 PEC: Let’s talk about your background. How did you get into the online pawn business?

Battis: “My background really is in manufacturing. I had a metal stamping and sheet metal fabricating company that I sold in 2000, and since then we set up a small investment fund, and we’ve been making small business investments and small real estate investments. So we’ve been doing quite a lot of that, and we felt that there would be a market for more upscale pawn loans to more affluent people and small business people.”

Battis: “Yes. In fact we have a local businessman here who has some retail cigar stores, and he had the opportunity to make a special purchase just before Christmas last year, but he had to pay cash for it. It was such a good deal, he wanted to take advantage of it. So he pawned part of his own personal collection and got some cash to make the purchase and then of course, he turned it over and was able to come back and redeem his loan and take his cigars back.

“It’s that kind of thing, where you traditionally had a line of credit with your local bank, but banks have problems of their own. They’re in no position to be helping small businesses these days. So we’re kind of an alternative for small business people.”

PEC: What about the platform that you use. Any special needs from the Pawntique.com website?

Battis: “The site itself is hosted on HubSpot, which is integrated marketing software, and we do our website and all of our landing pages and calls to action. We host our blog there and we do our email, lead nurturing and email campaigns, and all of that is integrated under the Hub Spot umbrella. So it’s really very flexible, very powerful software. We’re able to use the same software to do email campaigns to our existing customer base, trying to keep in touch with them and special offers and promotions and things.”

PEC: How do you gather email addresses from non-customers?

Battis: “We have a number of offers on our website for ebooks and interesting information, as well as on our blog. So there’ll be a number of forms where we collect, people opt in to give us their name and email address.”

PEC: What’s your most successful form of marketing? Email, search engine optimization, pay-per-click advertising, something else?

Battis: “We haven’t done pay per click yet. Mostly our blog drives traffic to the website. We blog probably three or four times a week. We do a lot of SEO, and that’s all built into the HubSpot software. They kind of make sure that everything you do is good practice according to SEO.”

PEC: Anything else on your mind as it relates to Pawntique, or our audience of mainly smaller ecommerce merchants?

Battis: “Well, we’re just about to launch our own store, our online shop. We’re using the Shopify platform and we’re excited about putting up some Rolex watches and some fine artwork that we have on that site. We’ll be interested to see how it works out selling some upscale items online.”