Putting a Dollar Value on Fans, Friends, and Followers

According to studies from diverse research and analysis firms around the globe, a Facebook Fan is worth $136.38, a Twitter follower is worth $2.00, and a would-be friend on Pinterest is worth, perhaps, $5.00.

Unfortunately, as concise and direct as these figures might seem when used as PowerPoint fodder — supporting details on a small business loan application or as justification in an annual marketing plan — they don’t really provide marketers or managers with the information required to make good decisions about investing in social media.

It turns out that no two Fans are really the same. Followers cannot necessarily be expected to comment on, repost, or share a business’ content according to some predictable schedule, and not every customer who clicks “Like,” “Recommend,” “Pin,” or “+1” is really engaged — let alone married — to the brand associated with that click.

“The fan base of a brand is unique and comprised of different levels of influencers and customers,” the Syncapse study said. “The average fan value is $136.38, but it can swing to $270.77 in the best case or go down to $0 in the worst.”

Social Media Effectiveness Can Be Measured

Nonetheless, if a business is willing to put some effort into establishing thoughtful goals and collecting and analyzing social media and site metrics, it is possible to discover what individual social media relationships are worth in actual dollars and cents. It is also possible to create a scale of social media contact values ranging from highly valued fans, followers, and friends to mire social media acquaintances.

The Importance of Setting Good Goals

The measurement process necessarily begins with knowing what is to be measured. Often in the case of online retail stores, the goal is to make a sale. So that some ecommerce marketers might be tempted to focus social media measurement and the question of how much a Fan is worth on either immediate sales generated with a single click or in comparison to a purchase from similar non-Fans.

Neither of these approaches, however, really provides the best information possible about a Fan’s, a follower’s, or a friend’s monetary value.

Consider as an example, a study from Internet trend tracking firm comScore and Facebook, the largest social media site, titled, “The Power of Like 2: How Social Marketing Works,” which was released June 12, 2012.

According to the study’s authors, “the 2011 holiday season presented an opportunity to further evaluate how social marketing works to drive quantifiable sales results for retailers. The analysis examined the social media presence of four leading retailers — Amazon, Best Buy, Target and Walmart — to determine how their social assets were leveraged to engage, and hopefully influence, customers during the all-important holiday season.”

The research found that Amazon’s Facebook Fans, as an example, spent more than twice what the typical non-Fan spent. Best Buy’s Facebook Fans were even more valuable relative to non-Fans, spending significantly more during the holiday season. In fact, even friends of fans were likely to spend more than shoppers not engaged on Facebook. 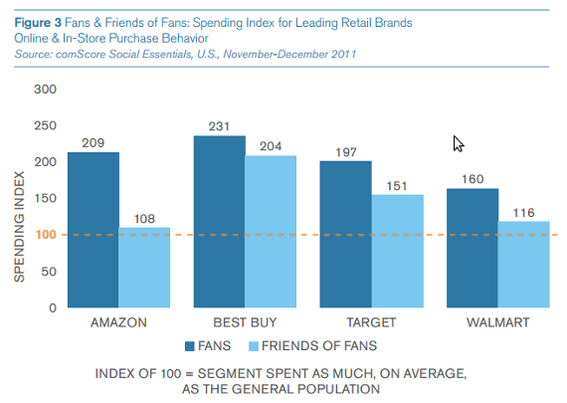 Unfortunately, these findings may not actually say anything about the value of a Facebook Fan.

“This empirical evidence that exposed Fans and Friends of Fans have higher spending behavior — across both online and in-store channels — strongly supports the importance of reaching these buyer segments. They are substantially more valuable consumers in terms of actual purchase behavior whether or not earned media exposure actually influenced their purchase decisions,” the comScore study said, adding that “while this research adds weight to the importance of social media, it also brings an important questions to the forefront — are the elevated spend levels among Fans and Friends of Fans the result of the messaging or a pre-disposition among these segments?”

Changing the goal just slightly from making a sale to making a lifetime of sales, however, leads to what might be a better goal for the business’ overall health and better metrics for really determining what a Fan, follower, or friend is worth.

Armed with a good goal for social media marketing — like making a lifetime of sales or, put another way, making lifelong customers — it becomes easier to begin measuring how successful social media campaigns are and how much social media contacts are worth to a retailer.

Harvard Business School Publishing has a basic customer valuation tool on its site that helps business to calculate the lifetime value of a customer supported with direct mail marketing. This tool’s basic concept may be applied to finding a value for Fans or followers.

To take a similar approach, a merchant will need to gather several data points from sales data.

Given this information it is possible to estimate how much a customer is worth.

Assuming an average shopping basket of $100, a combined cost of goods sold and non-marketing overhead of 50 percent, and an average of two purchases per year per customer, it can be estimated that each new customer is worth about $100 per year — $100 x 0.5 x 2 = $100.

From this $100 annual value subtract the average cost of customer retention marketing. This could be things like the time spent on marketing to an internal email list or — you guessed it — engaging with social contacts on Facebook, Google+, Twitter, Pinterest, or similar sites. You may calculate this figure, as an example, by taking the time invested in social media marketing and dividing it by that media’s reach. For the example let’s say that this figure is about $2 per year, placing the customer’s annual value at $98 per year.

From this number subtract the cost of initial customer acquisition. This is where marketing dollars are invested to attract customers for the first time, and includes tactics like pay-per-click advertising and social media contests. For the sake of the example, lets assume that this figure is about $50, reducing the customer’s value to $48 in the first year. However, this initial cost does not need to be applied for subsequent years. So by year two, this example customer is worth $146 ($48 first year, $98 second year).

This example, of course, is oversimplified. It does not describe the effort necessary for calculating initial customer acquisition costs or even knowing how many purchases a typical shopper makes in a given year — this is a metric that surprisingly few ecommerce marketers seem to know.

It does create opportunities for effectively measuring the value of a social media contact. For some businesses, that value might be equal to the lifetime customer value while others might consider it the equivalent of the initial customer acquisition cost. Others might equate Fan and follower values to customers on a spectrum of sorts. But valuing a Fan does not need to end here.

The process of setting a value for the typical customer and the typical Fan can be thought of as a range. Take the same approach as above, but this time find a value for the top 5 percent of customers, those customers that put more in a typical shopping cart or make more than just a few purchases a year. Set the value for these best customers at the top of the range.

At the bottom of the range set the value of a customer that only makes a single purchase. The middle of the range is the average shopper described above.

The value of social media marketing in this example can be measured in terms of its ability to move customers from the bottom of the range to the top, transforming low value customers into high value customers.