SEO: The Case for Optimizing Amazon

Some ecommerce businesses, especially those that manufacture the products they sell online or acquire their products at a deep discount, are experimenting with optimizing on Amazon alongside their existing websites. There’s more to this practice than an “If you can’t beat them, join them” mentality.

Winning searches and sales in Amazon and other top U.S. ecommerce sites like Walmart and Target is the new frontier in search marketing. Selling on and optimizing for these ecommerce marketplaces is another form of search engine optimization.

Amazon Is an Ecommerce Search Engine

According to comScore’s September 2014 Digital Media report, an estimated 233 million unique visitors in the U.S. visited Google sites, while 219 million visited Yahoo sites and 173 million visited Microsoft and Bing sites. This incredible reach — an estimated 74 percent of U.S. residents — is precisely the reason marketers are so interested in search engine optimization. 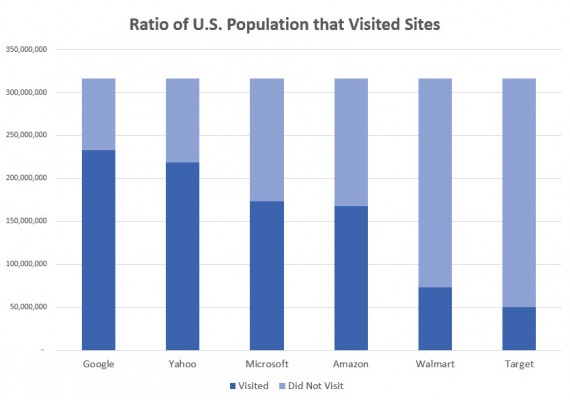 The next largest retail giants in the U.S. are also brick-and-mortar focused. Walmart and Target received an estimated 73 million and 50 million unique visitors, respectively, in September. They’ve got some ground to make up, but Walmart in particular has stated that ecommerce dominance is a primary business objective.

Given its size, Amazon is the obvious choice for merchants to optimize, though businesses with more resources may want to optimize and Walmart and Target as well.

The key value that these ecommerce giants bring is intent. When people visit Amazon, unlike Google, it’s not to learn about your company, read news about your industry, or write a report for a school project. They want to buy, or at least learn more about the products for which they’re searching.

Amazon delivers pure purchase intent, regardless of the phase of the purchase process they customer is in, because customers use Amazon as an ecommerce search engine.

With such a massive catalog of products, Amazon’s primary navigational method is site search. As such, search engine optimization targeted toward Amazon’s unique opportunities and algorithms can yield higher sales — just like SEO can for your traditional ecommerce site.

Amazon for App and Mobile Searches

Amazon has a couple more aces in its pockets: app dominance and mobile expertise.

In addition to SEO strength, Amazon has created an amazingly effective shopping app. A staggering 70 percent of Amazon’s tablet and smartphone visitors shop via the mobile applications versus a browser, according to a July 2014 report from comScore. 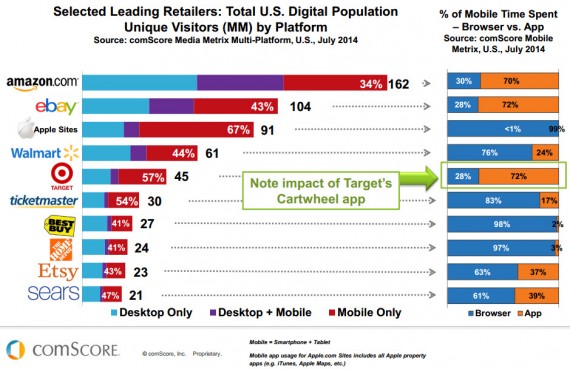 The percentage of desktop versus mobile and app visits for top U.S. ecommerce sites. Source: comScore.

The only chance your business has of reaching 70 percent of Amazon’s mobile shoppers is through inclusion in and optimization of Amazon’s catalog of products.

Target’s trend is similar, and Walmart’s recent focus on its promoting its app should increase its percentage of app visits in the coming months as well.

Amazon has also mastered its mobile site experience. When you visit Amazon on your tablet or smartphone, you know you’ll be able to complete your transaction and use all of the core shopping features on the site. For sites struggling with their own mobile ecommerce experiences, optimizing Amazon to win and complete transactions could be very attractive.

Does It Make Financial Sense?

Whether or not optimizing on Amazon makes sense for your business is purely a matter of numbers. Could the opportunity for higher sales generate enough profit to warrant the resources required to optimize and sell on Amazon? If your profit margins are already low, the answer is likely no. In some cases, the only way to find out may be to test it.

For those frustrated in their attempts to squeeze into the top rankings spots in Google and Bing, pushed down by the 900-pound gorillas like Amazon and Walmart, using these sites to their search marketing advantage can be very attractive.

When you work with Amazon, it will continue to win the rankings and the clicks from organic search results for your products. But when your products are the most highly optimized on Amazon and win the sale from that search traffic instead of your competitors’ products, that’s a win. Whether it’s a profitable scenario for your business or just for Amazon is the critical piece of the equation to analyze.

For the next installment of Jill Kocher’s SEO-for-Amazon series, see “SEO: Optimizing Product Content on Amazon.”