The merits of selling goods on Facebook are a topic of much debate. Several large retailers, including GameStop, Gap, jcpenney, and Nordstrom, experienced disappointing results and shut down their Facebook stores within months.

But according to Sucharita Mulpuru, retail analyst at Forrester, small businesses are achieving sales success on Facebook. She told The New York Times that companies that do well on Facebook usually have less than $100,000 in annual revenue and fewer than 10 employees. Some use Facebook to supplement sales at physical local outlets, while others are strictly ecommerce merchants and use Facebook to augment sales from their websites and eBay. According to a survey conducted by solution provider Payvment in March 2012, Facebook is the sole sales channel for 37 percent of sellers — 63 percent also have their own website. Merchants also use other channels with 29 percent selling on eBay, 21 percent selling on Etsy, and 15 percent using Amazon.

Shopping carts adapted for social commerce have provided the infrastructure for Facebook stores. Some of them are free — TabJuice is one — but have been criticized by merchants for lack of customer support. BigCommerce SocialShop, Shop Tab and Payvment are among the most popular. Payvment at one time said it had 200,000 clients but recently revealed that it is shutting down its platform this month and is transferring its customers to Ecwid, a Russian shopping cart provider that also offers Facebook storefronts. Intuit is reportedly purchasing Payvment’s technology and patents.

A new player in the Facebook sales arena is Soldsie, which helps very small merchants with the billing component of Facebook sales without requiring a shopping cart.

Based in San Francisco, Soldsie started out as a website builder for small merchants. Finding that most small merchants already had websites but wanted to sell goods via social media, the company switched gears and in May 2012 did a soft launch of its current service. It gained enough traction to fully launch in September. While co-founder Chris Bennett did not provide figures for Soldsie’s total revenues, he said the company had more than $1 million in transactions from May through September and garnered more than 2,000 registered users. It has roughly 100 merchant clients, according to Bennett. FundersClub, which earlier this month provided Soldsie with $425,000 in angel funding, stated that Soldsie’s revenues are doubling monthly and transactional volume grew quickly from five to six to seven digits. 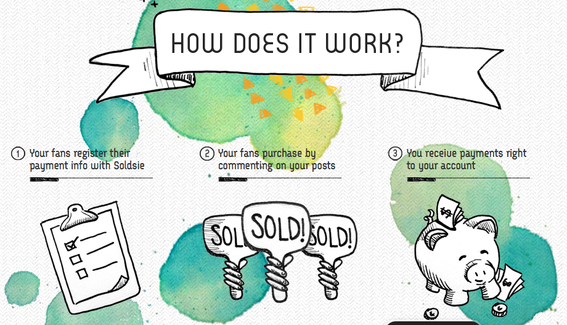 Soldsie integrates with Facebook’s Like and commenting features to facilitate sales.

Soldsie is a Facebook application that merchants install on their Facebook pages. To get started, merchants go to the Soldsie website, retrieve the application, and install it on their Facebook page. Merchants also need a PayPal account. Soldsie recommends that clients have a minimum of 500 Likes for their page. Merchants receive a 14-day free trial period. Customers indicate their intent to purchase by clicking on a picture of an item and commenting with the phrase “sold” or some other phrase the seller selects. Buyers then provide their email address in the comments so the invoice can be sent, or they can register their payment information with Soldsie. A “Send invoice” button is on the comments section. Merchants can manage invoices and payment status from Soldsie’s dashboard.

Rather than a fixed monthly fee, which is the business model for Facebook storefronts, Soldsie takes a percentage of revenue. Sellers with less than $700 in monthly sales pay no fee. Merchants with revenues of between $700 and $80,000 per month pay Soldsie three percent of their sales. Those with over that amount can negotiate an enterprise package. Payment processing fees are extra. Customers can pay via PayPal, and for credit cards sales, Soldsie now integrates with WePay, a payment platform. Soldsie is working on fully automated invoicing, enabling invoices to be sent to customers as they comment without Soldsie’s clients having to get involved.

Elizabeth Barnwell-Meier and Cate Biggs, co-founders of jewelry retailer Glam Grab started their company last year but found the manual invoicing to be tedious and time-consuming. They became enthusiastic Soldsie users because they appreciate the immediate and streamlined invoicing/payment options that Soldsie provides. “Now I want Soldsie to integrate with shipping,” says Barnwell-Meier. 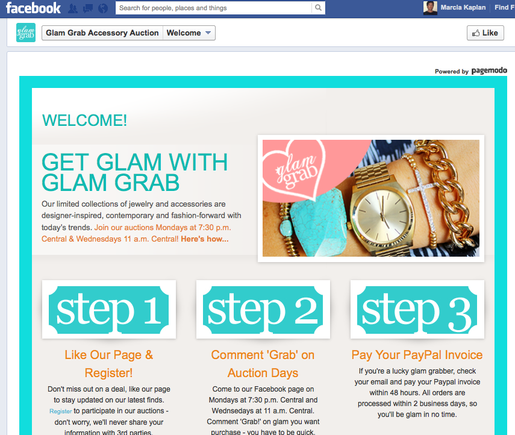 Some pundits have said that the Payvment shutdown signals the end of ecommerce on Facebook. But it could be that the social media sales model is simply changing. Another start-up, Ribbon, announced earlier this month that it is launching functionality that, like Soldsie, does not require a shopping cart. It lets buyers purchase directly from the Facebook news feed. Ribbon is streamlining digital payments by introducing a one-page checkout system that can be linked to from web, email and social media sites.