Analysts are predicting that 2016 holiday ecommerce shopping will break records as national economic indicators improve and consumer purchasing continues its shift from physical stores to the Internet. Following are some trends and expectations.

According to the Adobe Digital Insights report, online holiday sales will grow 11 percent over 2015, reaching $91.6 billion between November 1 and December 31. Sales on Black Friday are expected to increase over 11 percent and reach $3 billion while Cyber Monday sales will expand by 9.4 percent to $3.4 billion. The biggest growth rate will occur on Thanksgiving Day, with a 15.6 percent year-over-year increase.

Analyst firm eMarketer is estimating online holiday sales of $95 billion while the Deloitte Holiday Survey is predicting an even more robust ecommerce performance — $96 to $98 billion. 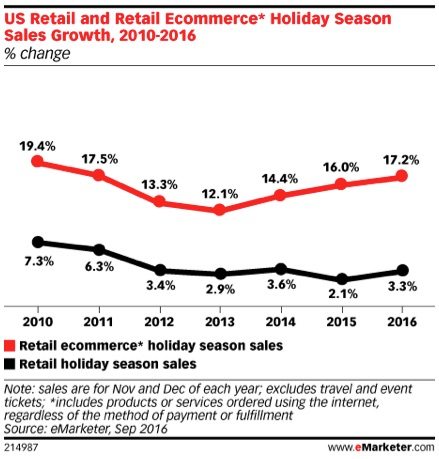 The Thanksgiving Day boost will be partially attributable to the many chain stores and malls that have decided to stay closed on Thanksgiving. For instance, the largest mall in the United States, Mall of America in Minnesota, has decided to close for Thanksgiving 2016 after being open for the past three years. Chains like BJ’s Wholesale Club, Costco, Dillard’s, hhgregg, IKEA, Nordstrom, Office Depot/Office Max, Sam’s Club, and Staples will also be closed on Thanksgiving.

“Thanksgiving Day online sales are poised to set a new record this year. With Thanksgiving Day expected to be one of the biggest mobile shopping days of the year, it gives retailers an opportunity to capitalize on ecommerce sales. Those retailers closing their physical storefronts on Thanksgiving Day can still boost their bottom line by driving consumers online and offering special deals. It also gives consumers a chance to avoid the mad rush in stores, even if that means shopping on mobile devices at the dinner table, and gives some retail employees an extra day off,” said Becky Tasker, managing analyst, Adobe Digital Insights.

Consumers seem to be tiring of the crowds, long checkout lines, and parking hassles that accompany the brick-and-mortar store shopping experience. Holiday shopping at big box stores will decline four percent from last year (59 percent of shoppers will visit a big box store in 2016 versus 63 percent in 2015) and shopping at traditional malls will decline three percent (50 versus 53 percent) according to the Deloitte 2016 Holiday Survey.

Deloitte also predicts that spending on gifts will be comparable to the 2015 season, with consumers planning to spend, on average, roughly $430. Shoppers plan to spend just as much money online as they do in brick-and-mortar stores.

For the first time, Adobe Digital Insights predicts that mobile will exceed desktop website visits by 53 to 47 percent. While the smartphone will be the most popular platform for browsing, most shoppers will conduct transactions on a desktop computer. Mobile will account for only 34 percent of sales with a 19 percent gap between visits and purchases. Desktop conversion is 2.7 times higher than mobile.

Thanksgiving and Christmas will be the biggest mobile retail days of the year, with mobile representing 59 percent and 66 percent of visits, respectively.

According to Adobe Digital Insights, surveyed consumers revealed that they consider email the best source of holiday promotions, followed by display ads.

Merchants need to be ready now with holiday promotions. Twenty-seven percent of Adobe Digital Insights’ survey respondents said they would start their shopping prior to Thanksgiving. Many retail stores and ecommerce vendors are already advertising “Black Friday starts now” discounts. Still, according to the Deloitte survey, 40 percent of consumers expect to do the bulk of their purchasing in December.

Deloitte estimates that one-third of gift purchases will occur as a result of a sale or promotion. The search for discounts will steer a good deal of online shopping, as 56 percent of consumers go online to find bargains.

Free shipping is an expectation for holiday shopping, with 71 percent of Deloitte survey respondents saying they will take advantage of it. If merchants don’t offer it, shoppers will look elsewhere. The definition of fast shipping has changed as well. Now more consumers expect items to be delivered in two days and 64 percent of survey respondents said they would not pay extra for two-day delivery.

Amazon has raised the bar for all ecommerce merchants as consumers’ expectations regarding in-stock products, delivery costs, speed, returns, and customer service are rising. Online merchants need to have their “A game” ready this holiday season.