Last December, at the height of the Christmas shopping season, Amazon aggressively promoted its price-checking mobile phone application by giving shoppers five percent off items on Amazon that they scanned while in brick-and-mortar stores. The application, which compares store prices with Amazon’s, brought the practice of showrooming — already very familiar to retail store clerks — out of store aisles and into public prominence.

Showrooming is the practice of customers perusing and trying out products in stores and then ordering them from online competitors that charge less. It is especially prevalent for purchases over $100. Many times the orders are placed while the customers are still in the stores. Ever since smartphones came on the scene, customers have been doing a good amount of information gathering in retail aisles. Price-check mobile applications have made the comparison process even quicker and easier. 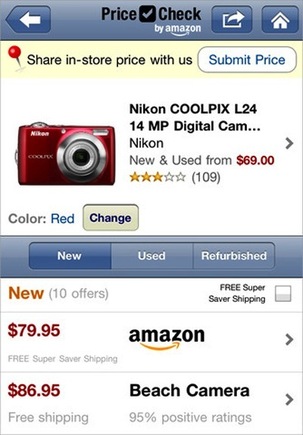 Nobody had to tell electronics retailer Best Buy that showrooming was a major problem. The chain has identified itself as a victim of showrooming, which it says is a big contributor to its declining brick-and-mortar sales. It is battling back by committing to offering shoppers the best price whether they’re shopping in brick-and-mortar stores, or online. In the past, Best Buy often had cheaper prices in its online store. Electronics and appliance chain stores have been particularly hard-hit because that is the category with the highest level of smartphone shopping adoption (49 percent) and frequency of use (61 percent), according to “The Dawn of Mobile Influence” PDF, a report published by Deloitte, the accounting and consulting firm, in June. The report results are based on a survey commissioned by Deloitte and conducted online by an independent research company in March 2012. The survey polled a national sample of 1,041 random consumers and augmented this sample with additional smartphone owners to reach a sample of 1,557 smartphone owners.

Is the Smartphone the Enemy?

Interestingly, Deloitte concludes that consumers’ in-store mobile activities are increasing store sales, Alison Paul, Deloitte LLP’s vice chairman and retail and distribution sector leader, stated in a press release, “Consumers’ store-related mobile activities are contributing to — not taking away from — in-store sales, and our research indicates that smartphone shoppers are 14 percent more likely to convert and make a purchase in the store than non-smartphone users. This means that mobile is an important tool for retailers to incrementally drive traditional in-store sales…”

Deloitte estimates that mobile’s influence — based on consumers’ smartphone use — will grow to represent 19 percent of total store sales by 2016, accounting for $689 billion in mobile-influenced sales. This is presumably due to the additional product information — such as demonstration and instructional videos — that consumers can gather on their smartphones, convincing them to purchase products that they otherwise would not have bought.

Deloitte notes that it measures “influence” not direct sales. “According to our research and analysis, the biggest impact of smartphones isn’t direct sales generated through the mobile channel, but rather the influence they exert over traditional in-store sales to drive in-store conversion and in-store average order size.”

Is It Price or Information?

The debate whether consumers’ smartphone use in stores is for price comparisons or strictly for gathering product information will doubtless continue. But if customers browse the aisles, look at products, tap away at their phones and leave empty-handed, it’s tempting to conclude that showrooming is happening. And price could be the paramount factor for those consumers willing to pay for gas and invest the time to go to a store and then order online and wait several days for an item to be delivered.

To combat showrooming, Best Buy has replaced standard bar codes with “Best Buy-only” bar codes that can’t be scanned and compared. They have also provided their own QR codes and encourage shoppers to scan them instead. In May Target announced that it would stop selling Amazon’s Kindle e-readers and began using Shopkick, a smartphone app, to reward customers who visit its brick-and-mortar stores with points that can be redeemed as discounts.

Retailers could also use lasers to jam mobile applications but no retailer has implemented that technique yet. Many are integrating their online and in-store inventory so that an item ordered online can be picked up in a store. Alternatively, if an item in not available online but is available in a store, the item will be shipped from the store. Some brick-and-mortar retailers are asking manufacturers for exclusive product mixes and receiving commitments from them not to show those products online.

Manufacturers are sympathetic because they fear that low online prices devalue their brands. Recently, Adidas announced that starting next January it is pulling its products from Amazon and eBay because it believes its image is being cheapened. Nike and Asics have also moved to restrict Internet sales. If more manufacturers pull goods from big ecommerce sellers, online sales could be significantly affected.

While retail chains have demonized online merchants for fostering showrooming, the culprits are really just a few major players that have the sales volume to undercut brick-and-mortar pricing. Smaller Internet merchants struggle to compete with the pricing of Amazon and eBay just as brick-and-mortar stores do. They receive no benefit from showrooming. Small ecommerce companies can take advantage of the benefits of smartphones by optimizing their websites for mobile shopping and utilizing mobile apps to provide product information and promotional offers. And they can follow the lead of retail merchants and request different products lines from manufacturers that are not offered by the larger ecommerce players.