Tablets and Phablets Could Boost Value of Ecommerce Video

New research shows that tablet users are more likely to watch video. Separately, a new and potentially popular smartphone category may be similar to tablets in video consumption.

A report released June 8, 2012 from trend-tracking firm comScore found that tablet users in the U.S. are three times more likely to watch videos than are other mobile users.

“Tablets are one of the most rapidly adopted consumer technologies in history and are poised to fundamentally disrupt the way people engage with the digital world both on-the-go and perhaps most notably, in the home,” said Mark Donovan, comScore senior vice president of mobile.

Tablets may be one of the most important segments of the computer industry now and in coming years, accounting for about 25.5 percent of all computer sales in 2011, according to a report from NPD Displaysearch, a research and consulting company. The firm estimated that some 72.7 million tablets were sold worldwide last year.

“In just two years since the launch of the iPad, the first tablet to reach a meaningful market penetration, tablet adoption has exploded, fueled by the introduction of new devices that appeal to various price and feature preferences,” comScore said.

Tablet users’ willingness to watch video may mean that ecommerce sites could better engage potential customers — who are already comfortable watching videos on their mobile devices — and improve sales.

Although data about how videos affect sales conversions tends to be anecdotal, case studies and whitepapers generally agree that adding video to a product detail page will increase the likelihood that a customer will actually buy the product.

Specific examples include eParty Unlimited — a retailer of party supplies — which enjoyed a 43-percent boost in sales for products with associated video, according to a report published in 2011. Separately, Golfsmith — which sells golf equipment — said it earned a 63 percent increase in conversions for product that included video presentations or product descriptions. 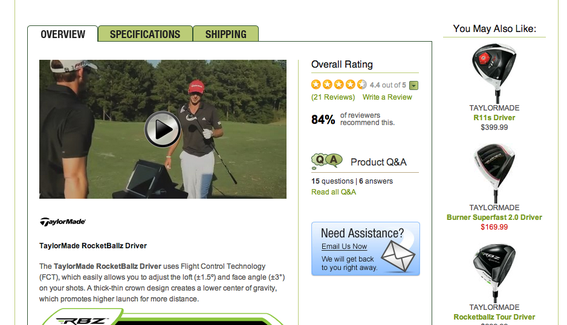 Golfsmith includes video on certain products, which — it says — increases conversions. This example is for a golf club on that site.

Phablets May Also Encourage Video Use

If tablet users are not enough of an incentive to incorporate more video into product detail pages, perhaps the rise of a new category of smartphone will be.

The Samsung Galaxy Note, which was released in February, is larger than a smartphone, includes a stylus, and is more portable than a standard tablet. The Galaxy Note is said to be the first of another new category of mobile devices that are part phone and part tablet. These so-called “phablets” could reach more than 200 million units sold by 2015, according to a report from ABI Research, a consulting firm, that was released June 8, 2012.

Phablets like the Galaxy Note feature a screen that is between about 5 inches and 7 inches diagonally. These larger screens, like tablets, may encourage video use.