Tools to Build a Strong Twitter Following; Relevance Is Key

Twitter is helpful for many small businesses. One key to maximizing its value is to find relevant people to follow in the hopes they will return the courtesy. Relevance is essential to growing a follower base that would most likely read your content, and eventually become customers. I would much rather have a smaller list of highly relevant followers than a larger, irrelevant list. The best scenario, however, is to have thousands of relevant followers.

The dictionary defines relevance as “having direct bearing on the matter in hand.” For ecommerce merchants, relevance is defined by the demographics and, in some cases, the location of the target audience(s). For example, a merchant who sells beads will likely target those who make jewelry. In social media circles, relevance is defined by communities that interact. Twitter is one place where this occurs.

Since Twitter does not allow you approve followers, there is no way to guarantee their relevance. However, you can do so when searching for others to follow, and there are a number of tools to assist in the process. 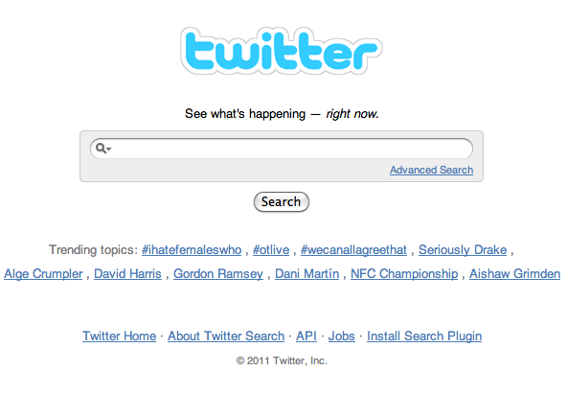 Part of Twitter’s value proposition where relevance is concerned is as a search engine. Think of the keywords that are important to you and your business and input them as search terms. Those you find who use the same terms may be relevant. (The same holds true for the use of Twitter “hashtags,” which are keywords prefixed with a hash or pound sign.)

For example, a client of mine sells pecan-related food gifts. A Twitter search of the terms “pecans,” “pecans recipes,” and “pecan gifts” often results in new, relevant prospects to follow. They oftentimes will follow the client’s Twitter feed, in return. And sometimes they’ll even become customers. 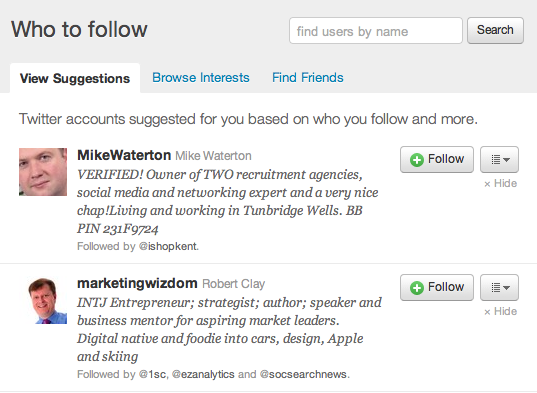 Twitter provides a recommendation engine with suggestions for whom to follow, divided into three categories: “View Suggestions,” “Browse Interests” and “Find Friends.” 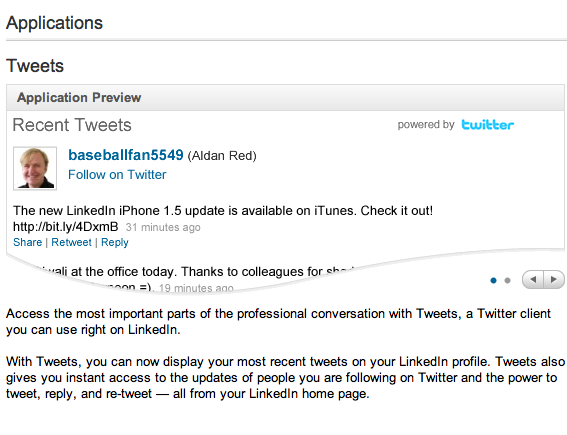 A prime source of relevant followers is LinkedIn. In addition to the above-mentioned email accounts, Twitter includes this option as part of its “Find Friends” category.

You must first have to have a LinkedIn profile and have the LinkedIn Twitter app installed. Once that’s done, click the LinkedIn button under “Find Friends” and Twitter will look for your LinkedIn connections that are using Twitter, but which you are not already following. 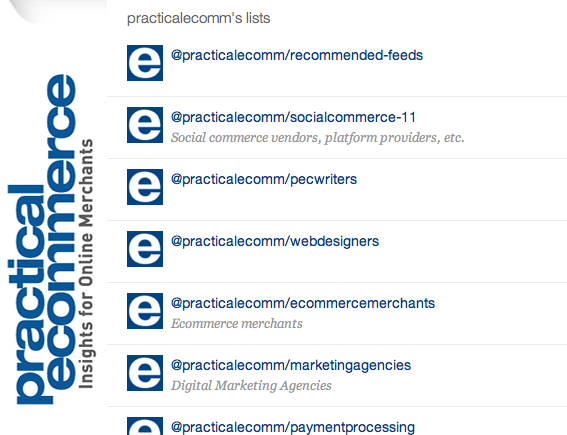 Twitter’s list feature provides a way to organize those you follow and to find new followers, as well. For example, at Practical Ecommerce we curate several lists, including ecommerce merchants, web designers and ecommerce platform vendors. Twitter gives users the ability to follow a list in its entirety with one click.

Listorious. Listorious uses the data available in the thousands of Twitter lists. It is a third-party application that enables users to find anyone by topic, region or profession, all powered by data from the lists in Twitter.

Wefollow. Wefollow is a directory of Twitter users based on tags. Input a tag in the search field and Wefollow will return a list of users associated with it. The hierarchy of returns is based on the degree of influence and/or number of followers.

Twellow. One of my favorite tools to locate new followers is Twellow, which bills itself as the “Twitter Yellow Pages.” Though laden with ad banners that clutter the interface, Twellow lists hundreds of categories covering everything from Aerospace to Textiles. You can also find followers by city and state using the “Twellowhood” feature.

Rather focusing on numbers of followers, emphasize their relevance. Follow those who are relevant to your business, either by virtue of niche topic or geography, and they will be much more likely to follow you in return. They will also likely read the content you produce, and retweet it to their followers. The most desirable result is that they become customers, and relevance plays a key role there, too.