In the U.S., the largest 25 online retailers enjoyed improved sales in the first quarter of 2010 while all other retailers struggled.

To perform better, some smaller online merchants should seek to drive more traffic with brand-based marketing, a topic that was discussed during a recent Practical Ecommerce webinar.

In May 2010, comScore, the Internet tracking firm, reported that sales for the largest online retailers grew 3.6 percent in the first quarter of 2010, to account for some 66.8 percent of U.S. online sales. Other merchants accounted for 33.2 percent of online sales as they gave up ground to the larger and better-known brands.

It may well be that in relatively difficult economic times, consumers seek to purchase from companies they recognize or trust even before they worry about price. In the aforementioned webinar, for example, attendees were asked to look at a list of online book retailers from Google Shopping.

The list, which was sorted from the lowest price to the highest, included some recognizable brands, like Walmart, Barnes & Noble, and Borders. But it also included many sites that were unfamiliar. Although those seemingly unfamiliar sites offered lower prices, many consumers would choose to purchase from the companies they already knew and trusted. 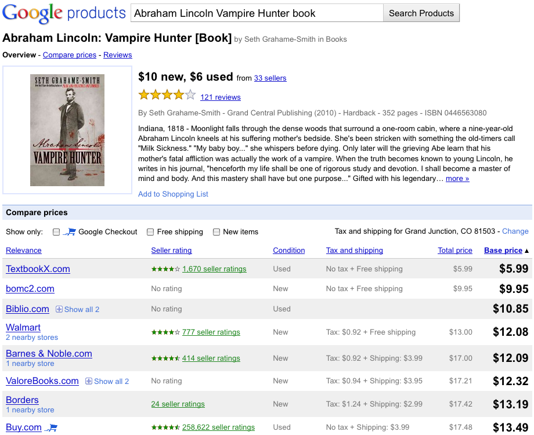 So how does a small online retailer begin to compete? According to Andreas Stenzel and Michael Eager, who were presenters in the webinar, there are actually a few things that merchants can do to get better results.

As one specific step, pay more attention to getting to know customers before trying new marketing campaigns.

One of the reasons that the top 25 online retailers outperform all other merchants may be that they already have relationships with shoppers. Once that relationship is established, it is easier to make follow-up sales. Stenzel, who is a senior manager of online marketing at TRUSTe, suggested continually focusing your attention on the customer in order to identify what is motivating the purchase decision—for example necessity, convenience, and price.

With this information in hand, it is possible to begin marketing to those customers in a way that builds relationships (or, put another way, your business’s brand).

For example, if you conducted a survey of potential customers and discovered that they often bought because clear product descriptions were available, you might launch a series of product videos on your site. Include the Facebook “Like” button with each video, and before long your videos might be part of a relationship building conversation. Customers would be getting to know your business better, and when your band appeared in a list like the one mentioned above, you could be the one getting the traffic.

One of the most common questions about social marketing is “what do I say?” Many online retailers believe that they should be on sites like Facebook or Twitter, but are not sure how to engage in the conversation without seeming like a bad used car salesman.

Consider the case of Blendtec, which famously got millions of YouTube followers when it used its powerful blenders to puree non-traditional items like mobile phones, golf clubs, and toys.

Large, well-known brands certainly have some advantages, as the comScore data seems to indicate, but this does not mean that small merchants cannot compete. In fact, there is a lot that can be done.