Deep discounts and free shipping fueled a record setting November-to-December holiday shopping season for online merchants in 2011 in the U.S., according to a new report. Cyber Monday also saw an extraordinary $1.25 billion in sales.

“The 2011 online holiday shopping finished with slightly more than $37 billion in spending, up about 15 percent versus a year ago,” said comScore chairman Gian Fulgoni in a press release about his company’s most recent findings.

“With brick-and-mortar holiday retail estimated to have grown about 4 percent this year,” Fulgoni said, “it’s clear that ecommerce continues to gain market share from traditional retail due to the attractiveness of the Internet’s convenience and lower prices. Consumers were especially attracted to the deals and discounts available through digital channels — particularly free shipping, which occurred on well over half of transactions this season. “ 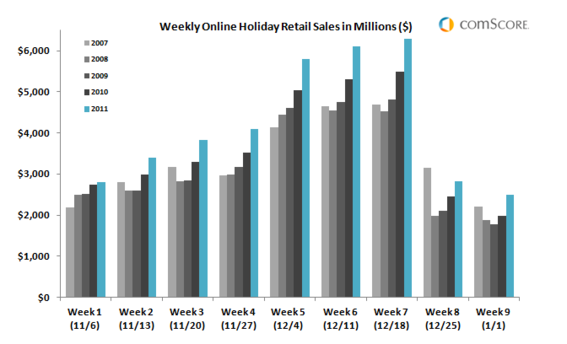 U.S. online holiday sales in 2011 outpaced prior years during each week of the season.

According to the comScore report, three individual days during the holiday shopping season had more than $1 billion in online sales each, including Cyber Monday on November 28 at $1.25 billion, Green Monday on December 12 with $1.13 billion, and Free Shipping Day on December 16 with $1.07 billion.

Each of these days generally receives additional marketing support from online retailers. For example, Cyber Monday has grown to be a huge marketing event with many nationally recognized merchants offering deep discounts to online customers.

Cyber Monday, according to comScore vice president Andrew Lipsman, was given its name in 2005 when Shop.org, which is part of the National Retail Federation, pointed out that online sales tended to jump on the first Monday after Thanksgiving.

“The ostensible explanation for this phenomenon” wrote Lipsman in a blog post, “was that as people made their way back into the office after the long holiday weekend, they continued their Black Friday shopping online, but from their work computers with high speed connections. In fact,” Lipsman added, “comScore has observed over the years that approximately half of all online spending occurring on Cyber Monday occurs via work computers.”

In 2005, Cyber Monday was an important holiday season shopping day, but it was not the largest online shopping day of that season. It was not until 2010 that Cyber Monday became the single largest day for online U.S. holiday shopping, which was a feat it repeated in 2011. Once the phenomenon had been observed and named, marketers started to give the day special attention, creating exclusive Cyber Monday deals, encouraging shoppers on this opening day of the online Christmas shopping season.

Similarly, Free Shipping Day, which is a marketing-driven event, gave shoppers another reason to avoid lines at brick-and-mortar stores and shop online. Green Monday, which gets its name from the color of money and not the environmental movement, has become a favorite for email marketing.

In short, the success of these particular days and the 2011 holiday season in general may be — at least in part — the result of effective marketing.

How Much Did Sales Cost?

Much of that marketing, as comScore’s Fulgoni said above, was in the form of significant discounts and free shipping. What is not yet clear is how successful that marketing really was in terms of retail profits.

“It’s clear that, at least on the basis of top line growth, this was a Merry Christmas for many online retailers,” Fulgoni said. “What will remain unknown until retailers report their financial year-end results is whether the aggressive pricing and free shipping offers came at the cost of lower margins.”