When ecommerce was in its infancy, consumers used the Internet to purchase basic items such as books and CDs that usually didn’t involve size, quality, color, or style issues. Shoppers knew what they were getting and choices were based almost solely on price. Slowly, the array of goods expanded to computers and consumer electronics and online shopping became the domain of males.

Not until apparel, accessories, and personal care items began selling online did women become a recognizable and sizeable audience. Now women spend more money online than men in all but three categories: electronics/computing, event/movie tickets, and flower/greeting cards/gifts — according to digital marketing research firm comScore. While females comprise 71 percent of apparel, accessory, and jewelry purchases, males are increasingly making their presence known, especially in the luxury category. And their interest in high-end items is not limited to apparel and accessories. Cars, technology gadgets, travel, and health and wellness rank high for males shopping online.

The two most common male online purchase-related activities are price checking and reading online consumer product reviews. A January 2012 Pew Internet & American Life project survey stated that nearly as many men as women will call a friend to ask advice about a purchase on their mobile phone while they’re shopping in a store. And more men than women look up product reviews on their smartphone while in the store.

Last year I wrote “Behavioral Differences Between Men and Women Influence Shopping,” addressing how men and women shop online. This article is a follow-up to that, focusing on affluent men’s online shopping habits.

First, well-to-do men are still buying electronics, books, and all the things they have always purchased online. But they are expanding into new areas such as jewelry, watches, and apparel. And they are doing their own shopping, both for gifts and for their own needs.

A report, “The Affluent Male: What His Online Behavior Can Teach Luxury Brand Marketers,” was released earlier this year by digital marketing consulting firm iProspect. The report is based on a study conducted for iProspect by comScore, which used its U.S. panel of affluent males — over age 18 with a household income of more than $100,000. The study consisted of 517 surveys completed during February 2012.

Other research confirms this. Hana Ben-Shabat, a partner in the Consumer and Retail practice at consulting firm A.T. Kearney says, “The profile of the affluent male is someone who travels a lot and does not have time to go to stores. He buys across all categories — consumer electronics, clothing, books, and personal care.” A.T. Kearney’s own research shows that the more affluent a consumer is, the greater the disposition to shop online.

The iProspect report states that 75 percent of affluent males are 35 and older.

The majority of purchases are still made on PCs, but the affluent male is doing more research on smartphones and tablets, 51 percent and 43 percent respectively. Eighty five percent of affluent males use a tablet at least once a day. (Note: The survey was conducted in February and tablet usage has increased substantially since then.)

Affluent males show a preference for video and search ads over banner ads.
They are becoming more social — sharing product reviews and actively engaging with Facebook and Google+ regarding their shopping choices.

The four websites affluent males visit most frequently are, by ranking, Amazon, Yahoo!, Google and eBay.

Seventy percent of affluent males prefer to research and buy online, rather than researching on the web and purchasing in a store. Ben-Shabat, with A.T. Kearney, corroborates this finding. The affluent male is busy and what is important is convenience, she advises. She also points out that affluent male shoppers are brand conscious but not necessarily brand loyal. They are less price sensitive than the average shopper and more interested in quality and style. And while older affluent men are more likely to just go to a site and make a purchase, younger ones perform a good deal of research, both looking for peer reviews focused on quality and brand, and sharing their own opinions.

Ecommerce merchant Gilt Groupe is one of the most successful designer apparel sites on the web. Keith George, general manager of websites Gilt MAN and Park & Bond, says the average income of his male customer base is $102,000 a year, the average age is 35 and the typical customer is single and white. George, who used to work at Gap, Inc. counsels, “Guys are most likely to buy brands they are familiar with – they care about fit. As a result, known brands perform best. I am convinced that the ecommerce site that figures out size and fit across all its brands will be the winner.” 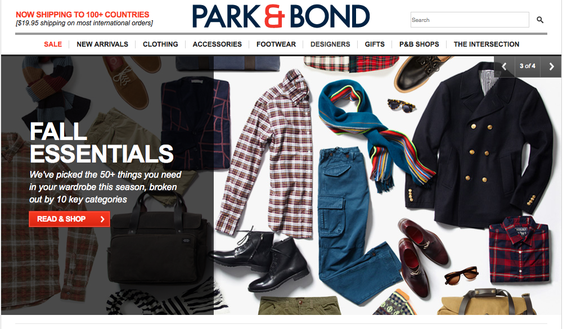 The key to successfully marketing and selling to a male audience, according to George, is not to apply the same template for women and men. “You don’t have to be macho, but just understand the subtle differences between even the simplest terms and messages. For example, the terms ‘fashion’ and ‘style’ may appear to mean the same thing. However, my sense is that most guys don’t necessarily want to be in fashion, but they do like the idea of having their own style. So we pay attention to every word and every subtle message to ensure we are speaking to our guy and not simply inserting a feminine slant.”

He adds, “Men need to be able to see themselves in the product and want to relate everything back to their core style. Oftentimes, men have one look for work and one look for the weekend, and they don’t stray too far from their standard look because they just don’t know how to put new outfits together. As a result, we do a lot of ‘get the look’ sales where we layer several outfits in a sale that speak directly to our guy.”