Pinterest may be an excellent option for publishing instructional (how-to) content aimed at building relationships with customers and, ultimately, encouraging sales.

To understand why Pinterest may be a good way to syndicate how-to articles, videos, and graphics, it may help to have a bit of context related to pinning and content marketing for retailers.

Ecommerce marketers already know that Pinterest is an excellent social media channel for generating sales, given that some data indicates that shoppers clicking from Pinterest to an ecommerce-enabled site may be 10 times more likely to make a purchase than are visitors arriving from other social media sites.

Separately, content marketing is, perhaps, the most important trend in the industry. Writing in the Harvard Business Review, Alexander Jutkowitz, vice chairman and the chief global strategist at Hill+Knowlton Strategies, a public relations firm, described content marketing as a “phenomenon…[that] has unfolded rapidly because it responds to consumer preference.”

Some “70 percent of people would rather learn about a company via an article than an ad,” Jutkowitz wrote, adding, “even The New York Times admits that native advertisements can perform as well as the paper’s own news content. Brand publishing allows companies to react in real time, provide increased transparency, and create a strong brand identity at a fraction of the price of traditional marketing tactics, and in less time.”

Building on what marketers know — that Pinterest works and content is vital — it only makes sense to combine them, which is something many companies, including many retailers, are doing very well.

Macy’s, as example, used Pinterest to preview Black Friday Doorbuster offers. At the time of writing that board had more than 36,000 followers.

Many of the retailers that do share content on Pinterest tend to post pins in three general categories: (a) products they want to sell, (b) contests to encourage customer interaction, and (c) relationship-building pins.

The aforementioned Macy’s Black Friday pinboard is an example of the first category. And another Macy’s board, Martha & Macy’s, was used to promote a contest that introduced Macy’s followers to the Martha Stewart Collection at Macy’s. And, to continue using Macy’s as an example, the company’s Trend Spotting board includes pins from around the web that show trending fashion, hip colors, or whatever else Macy’s believes its Pinterest followers might like. But this third category of pins, relationship-building pins, might be used for more than handsome pictures. 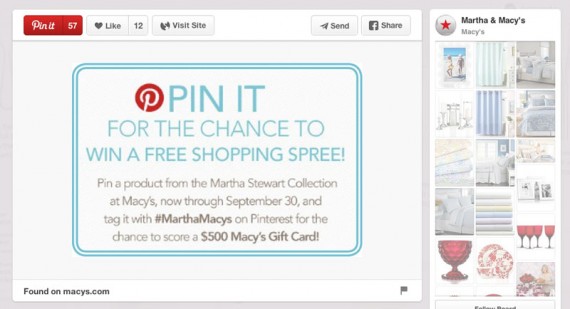 Macy’s board Martha & Macy’s was used to promote a contest that introduced Macy’s followers to the Martha Stewart Collection at Macy’s.

Pinterest also has the potential to be an excellent distribution channel for instructional or how-to content that was created to share useful information. This type of content, which can help a person learn a new skill or improve in some way, and is one of the most powerful forms of content marketing.

Home Depot has many examples of using pins to promote long-form how-to content on its own site. There is, for instance, a pin on the store’s DIHWorkshop pinboard promoting a tutorial that will show folks how to build a rolling storage cart. The complete how-to article is on Home Depot’s The Apron Blog and linked via the pin. 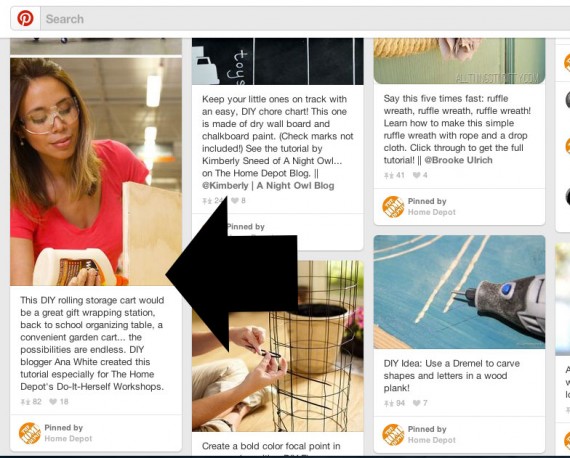 Home Depot has many examples of using pins to promote long form how-to content on its own site.

To use Pinterest like Home Depot, simply include pinable graphics in how-to content that you publish on your own site or blog, and pin those graphics.

The Missouri Star Quilt Co is an another example of a retailer that creates how-to video content and shares that content on Pinterest via a board simply named, Quilting Tutorials. At the time of writing, this impressive board had more than 20,000 followers and dozens of helpful how-to video content. 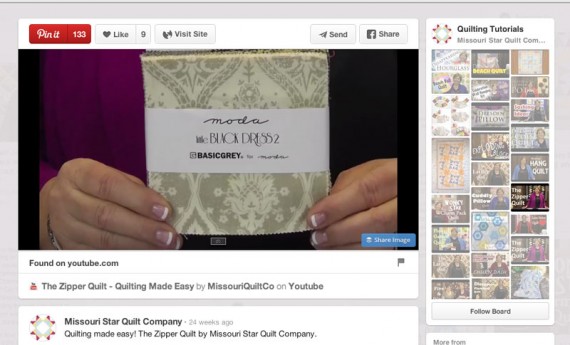 To pin your own video how-tos, follow the same steps as the Missouri Star Quilt Co, creating a good quality video, publishing it first on YouTube for hosting and promotion there, and then distributing to Pinterest, where you hope to gain thousands of followers, who may some day be customers too.

The third way of presenting how-to content on Pinterest, as mentioned above, is to create a complete tutorial in a single graphic. Designer and entrepreneur Drew Scott provides excellent examples on his D.I.Y. board. One of his popular pins is about how to make a journal with Washi tape. Perhaps, not surprisingly, Scott also features a wide selection of Washi tape in his Etsy shop. 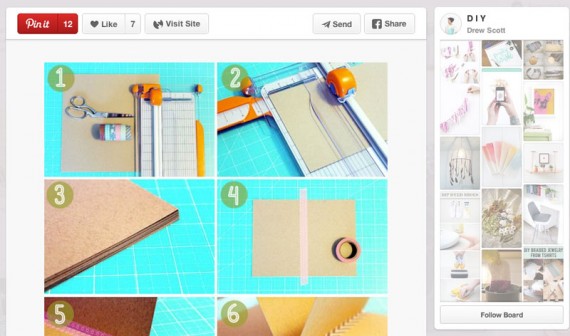 This third method of publishing how-to content on Pinterest might require the most focused effort. In each of the two earlier examples, content was created, published, and redistributed on Pinterest, but single-graphic tutorials are a relatively unique Pinterest form. To make your own, come up with a simple how-to that can be explained with nothing more than pictures, take those pictures, and combine them into one long image in photo editing software.