Using the Olympics for Ecommerce Marketing 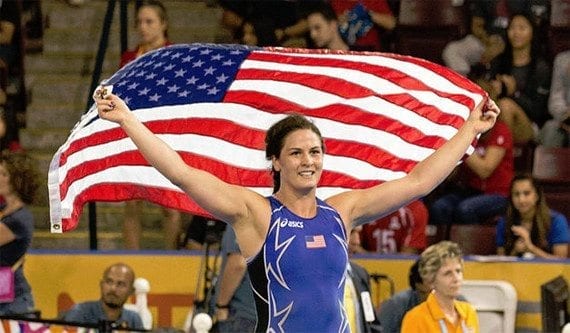 Adeline Gray of the U.S. is a contender for an Olympic Gold Medal in Women’s Wrestling at the 2016 Summer Olympics. Online retailers may be able to receive endorsements from Olympic athletes. Photo by Tabercil, Creative Commons License.

Note: Since I wrote this article, the International Olympic Committee and the United States Olympic Committee have attempted to restrict all use of Olympic words, phrases, and emblems on social media and, possibly, in content. Given this change, I no longer recommend using the Olympics in your content marketing.

The Olympics are inspiring. During the games, consumers worldwide will watch some of this generation’s greatest athletes compete in events ranging from swimming and hurdling to Taekwondo and table tennis. Media consumption, television viewing habits, and even shopping behavior will change.

These changes to what your customers and potential customers do or think could impact your business. So, with the Games of the XXXI Olympiad (Rio 2016) starting soon, consider investing some of your time and marketing efforts around the event.

What follows are four possible ecommerce marketing plans that honor the Olympics and may help your business connect with Olympic fans.

Even small ecommerce businesses can place ads or run promotions around the Olympics. The key will be to focus on things that do not cost a lot but that have the potential to attract folks to your site.

With a little more money to spend, you can take the options from Plan 1 up a notch.

For example, for the content marketing, you might create a humorous video parody. An online retailer of fishing products could describe what the Olympics would be like if anglers ran them. Events might include sturgeon wrestling, high-speed fly tying, and kayak fishing.

Stanford certainly has a vested interest in getting you to advertise on YouTube, but she is also probably correct about fans turning to YouTube to watch Olympic-related videos during the games.

You could make a more significant investment in an athlete’s endorsement. For example, a site that sells apparel to young women could seek an endorsement from someone like Adeline Gray, a three-time women’s Freestyle wrestling world champion and a likely gold medalist at the 2016 Olympic Games. She is a trailblazer in women’s sports.

The clothing retailer could supply Gray with products and have her appear in online ads or a content marketing profile. There are some restrictions and even blackout dates. Specifically, ads featuring an Olympic athlete’s endorsement may not run during the Olympics. But it would make for a powerful marketing opportunity.

With an investment of $5,000 to $20,000, you could hold a social media contest and send a pair of shoppers to the games for a weekend of fun.

The online contest, promoted with online ads and a commercial on YouTube, might attract tens of thousands of folks to your online store. Make subscribing to your email list a requirement for entry and collect likes and follows on social media. These new email subscribers might impact your business and your sales for years.

You would have expenses associated with the promotion and the travel. A pair of airline tickets from Portland, Ore., as an example, to Rio de Janeiro for August 11 to 14 will cost about $3,200. The hotel room for three nights will range from about $600 at the two-star Hotel Mundo Novo to about $3,000 for better accommodations.

You could send the pair of winners to women’s handball on Friday morning ($40); trampoline gymnastics in the afternoon ($40); and the swimming finals ($150 in the cheap seats). Saturday could include the artistic gymnastics apparatus finals ($150) and Greco-Roman wrestling finals ($40).