Struggling states and some brick-and-mortar retailers have reinvigorated an effort to mandate that online merchants collect sales taxes for all U.S. jurisdictions, whether or not those retailers actually have operations there.

The most recent legislation is the so-called Marketplace Fairness Act that, according to its sponsors, seeks to undue online retailer’s competitive advantage and make it possible for states to collect an estimated $20-to-$40 billion in additional taxes.

The legislation and the suggestion that online businesses should collect sales taxes from every state (and every county and city), has sparked arguments, spurred aspersions from all sides, and led many to ask, “In a struggling economy, will mandated sales tax collection hurt small businesses?”

What Is Small Business?

The proposed legislation includes a “small seller exception.” This exception states that if a merchant had less than $500,000 in remote sales — which are sales to jurisdictions wherein the merchant has no operations or agents — in the previous year that merchant will not be required to collect additional remote sales taxes.

This clause effectively defines what a small online business is, and provides some protection for startups and entrepreneurial ventures. It is an olive branch to the smallest of businesses and to business advocates that claim the Internet sales tax mandate would make it significantly more difficult to start a new online business and place on onerous burden on retailers.

As an example, imagine that a merchant had exactly $500,000 in remote sales. Next, imagine that this merchant earned about 20 percent over the cost of goods sold, payment processing fees, and the shipping offset — since more than half of online sales now include free shipping. This hypothetical retailer would have $100,000 in “profit” dollars before general overhead.

Something like 7-to-10 percent of revenue should be (must be) reinvested in marketing, such as pay-per-click advertising and email. The retailer earning $500,000 per year could be spending $35,000 on all marketing, meaning that the business would have $65,000 “profit” dollars left to pay employees, lease server space, maintain an SSL and other security, pay for accounting services, and pay income taxes or office rental.

“The people who have the bricks-and-mortar retail establishments are collecting sales tax in every state as they are required to by law,” said Sen. Richard Durbin (D-IL), one of the Marketplace Fairness Act’s sponsors, in a recent CNBC interview. 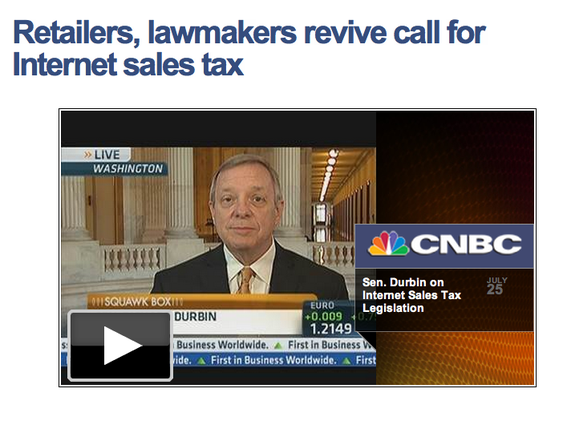 “That sales tax, of course, sustains local services and the functions of government, but the Internet sales in those same states are not, in many cases, collecting that same sales tax, so there is a competitive advantage for the Internet retailer over the bricks-and-mortar person.

“As you meet with these shopkeepers and retailers around my state, they say, ‘This is totally unfair we are required by law to collect it. The Internet sales are not.’”

Durbin’s argument — that not having to collect sales tax is an advantage — has been a rallying cry for some retailers and retail organizations.

In the past, some of these same organizations and individuals have also complained that online merchants enjoy lower start up costs, lower overhead, and lower marketing costs. Meanwhile, online retail advocates point to merciless shipping costs, the burden of paying for return shipping, card-not-present fraud related costs, and the difficultly in getting vendor relationships as some of online retailing’s clear disadvantages compared to traditional stores. And online retailers must already collect sales taxes in any jurisdiction wherein they do have operations.

Regardless of what one believes relative to which type of retailer is better positioned in the marketplace, Durbin’s underlying assumption is that impeding online retailers — since taking away a market defined competitive advantage will certainly retard a business segment — is better for small business and for the U.S. Economy.

The Burden of Tax Collection

The U.S. has something like 9,000 tax jurisdictions. Each of these states, counties, townships, cities, or villages has different tax requirements and separate tax reporting forms and procedures.

Thanks to a 1992 ruling in the case of Quill Corp. versus North Dakota, at present online merchants only have to collect sales taxes in those select few jurisdictions wherein they have a physical location or agent.

The idea was that it would be both absurd and impossible to manage a system that required a merchant to know and comply with every far-flung taxing body.

Nonetheless, this is exactly what is being proposed now.

If this new legislation becomes law, an online retailer might need to identify each and every tax jurisdiction and keep up with every tax change. This could mean that if just 30 percent of tax jurisdictions (assuming the aforementioned 9,000 total jurisdictions) made a single change to their tax code or even paper work once every five years a national online retailer would need to up date its sales tax collection procedures twice a day, every business day, forever and ever.

This example is, of course, extreme since this same retailer would also need to be shipping products into each jurisdiction in order to be subject to the mandate to collect sales taxes there, but hopefully the point is clear. This proposed law is asking a lot.

At the same time, it is likely that services will become available — Avalara is a company that provides this sort of comprehensive sales tax service already — to seamlessly manage sales tax collection across all of these tax-collecting jurisdictions in the country.

In fact, it would be reasonable for an organization like the National Retail Federation to maintain an open source database of all tax jurisdictions that online merchants could access via an application programing interface.

Tax collection automation could offset most of the burden that the new law represents, and it would not be a surprise to see software-as-a-service ecommerce platforms provide these services as part of basic ecommerce packages.

A second part of the burden this legislation might represent is that online retailers would have to pass this tax on to customers, who would have to pay more for their purchases. Given the possibility of additional shipping charges and the necessity of waiting for a product to arrive via FedEx or the U.S. Postal Service, it may be the case that online buying will, as Durbin hopes, loose some of its luster, driving online shoppers into local stores.

As the U.S. economy continues to struggle, a debate has risen over whether online merchants ought to collect sales taxes for every jurisdiction into which products are shipped regardless of whether or not the merchant has a location or agent in that jurisdiction.

The underlying premise behind this proposed legislation is that forcing sales tax collection would be better for struggling or bankrupt local and state governments and better, in general, for small business.

Determining if this proposed law would achieve its goal, may come down to three considerations.

Second, does it make sense to slow down ecommerce, which has been out pacing the economy, in order to tow along under-performing physical stores?

Third, is the law actually a burden to online businesses? If it is just to impede online retailing in order to encourage in-store retailing, does the law go far enough to level the proverbial playing field or will automation marginalizing its effect?