WooCommerce, the popular WordPress ecommerce plugin, had nearly 260,000 active sites indexed with BuiltWith, a web technology profiling tool, as of April 14, 2014, about 37,000 more sites than its next closest competitor, Magento.

According to BuiltWith, the number of ecommerce sites using WooCommerce has grown 452 percent since May of last year from a reported 46,897 sites to about 259,386 sites as of April 14, 2014. WooCommerce’s site count grew 105,583 sites indexed in just the first quarter. BuiltWith collects data for about 252 million domains each quarter. While this means that BuiltWith is not indexing the entire Internet, the numbers are statistically significant in the same sense that surveys of relatively small samples can be used to discover tends in the larger industry. 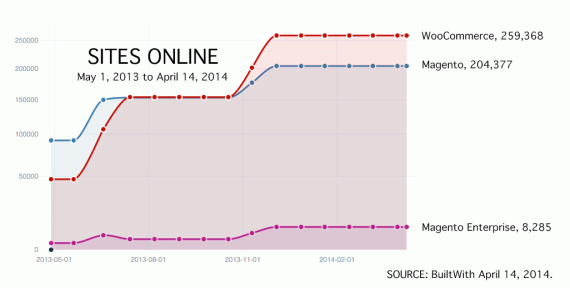 The massive number of WooCommerce-enabled websites may be attributed, in part, to the popularity of the WordPress content management software on which WooCommerce runs.

WordPress is believed to power more than 12.3 million websites worldwide, which, by some accounts, makes it the single most-used web publishing platform currently available. WordPress is itself well documented and well understood in the development community, making the prospect of adding ecommerce capabilities with WooCommerce undaunting.

WooCommerce, which is an open-source project from WordPress theme firm WooThemes, also benefits from having many thoughtful features, a familiar and intuitive interface, and an easy-to-employ representational state transfer (REST) application programming interface (API) which makes connecting it to existing accounting, shipping, or order fulfillment systems relatively simple.

The close tie to WordPress and the thousands of available WordPress plugins and themes also means that WooCommerce-enabled sites may be generally better at supporting content marketing campaigns and easier to optimize for mobile devices.

The WooCommerce plugin, which may be used for live sites and development environments, has been downloaded more than 2.9 million times, according to the WordPress website. This number likely does not include downloads directly from the WooCommerce website.

It is worth noting that WooCommerce was significantly more popular with small businesses.

Magento’s two licensed versions — the free Magento Community Edition and the paid Magento Enterprise Edition — powered 212,662 active ecommerce websites indexed by BuiltWith as of April 14, 2014, making it the second most popular ecommerce platform in the world.

For the past several years, Magento has fueled the growth both in the number of ecommerce platforms and also in their capabilities. Every competitor — if marketing materials and pay-per-click campaigns are an indication — wanted to be as good as Magento, if you will.

Magento has long been promising a dramatic update to its platform that would include performance improvements, the addition of the jQuery JavaScript Library, and other features. But Magento 2.0 is still not available on the Magento website; it is apparently only available on GitHub.

Seven of the ten most popular ecommerce platforms in April 2014 were open source, according to BuiltWith.

Open source software allows any developer to open, read, and even modify its code.

Perhaps the single best analogy for open source software is an automobile. Any mechanic can open the hood, change the sparkplugs, or adjust the timing. In contrast, when software’s source code is closed, a developer is unable to learn how it operates or make modifications.

Open source software is often developed in a community, meaning that any savvy developer may contribute code or ideas, helping to advance the project quickly.

OpenCart is also a leader among popular open source ecommerce platforms with some 213,737 active sites indexed, up 38,209 for the quarter, according to BuiltWith.

The osCommerce platform added 18,182 sites for the quarter, bringing its total active site count to 108,257 indexed. Ubercart, which runs on the Drupal content management system, added 3,725 new sites in the quarter for a total of 37,587 active online stores indexed, again according to data from BuiltWith.

ZenCart, which had 146,672 active sites indexed on April 14, was among the top ten most popular ecommerce solutions based on site count, but had been constricting, losing some 17,308 sites for the quarter. WP e-Commerce, which is another WordPress plugin, saw its site count drop by 1,232 sites for the quarter, leaving it with some 80,474 active installations, BuiltWith reported. 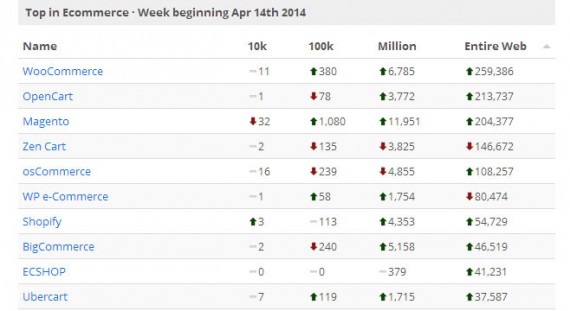 Consensus Is Not the Final Test

Oracle’s Ecommerce Platform (formerly ATG) lead among the largest online retailers. Similarly, IBM’s Websphere Commerce added 564 sites on the quarter to bring its total to 1,173 sites indexed in BuiltWith, of which, 43 are employed by some of the largest ecommerce companies.