When AmazonSupply became Amazon Business in April 2015, much more than a rebranding occurred. With AmazonSupply, the company was the only seller. But Amazon Business copied the very successful marketplace approach of the regular Amazon site and welcomed more than 30,000 third-party vendors to offer their goods on the website. These vendors now account for more than half of all orders on Amazon Business.

Amazon is now challenging major online business suppliers in office products (Staples) and industrial goods (Grainger). It has over nine million items for sale and all products available on the Amazon.com marketplace are also accessible on the Amazon Business site.

In its first year, Amazon Business had revenue of over $1 billion. It is currently adding about 100,000 new accounts per quarter. Prentis Wilson, vice president of Amazon Business, stated earlier this year that the marketplace enjoys a 20 percent month-over-month sales growth rate. At the end of the 2016 second quarter – June 2016 — Amazon Business had 400,000 registered buyer accounts.

Amazon Business now offers quantity discounts on more than five million items. It provides business accounts that enable individual buyers or departments in a company to make purchases under the same account.

To further streamline the purchase process, Amazon Business offers electronic invoicing that combines orders from multiple sellers in a single invoice from Amazon Business. Customers make payments to Amazon Business, which then pays each supplier.

It also provides sellers access to Fulfillment by Amazon, which lets customers receive products ordered from multiple suppliers in one shipment. Customers get free shipping for orders over $49. Amazon Business plans to add more than 80 new features to enhance and streamline the selling and buying process. 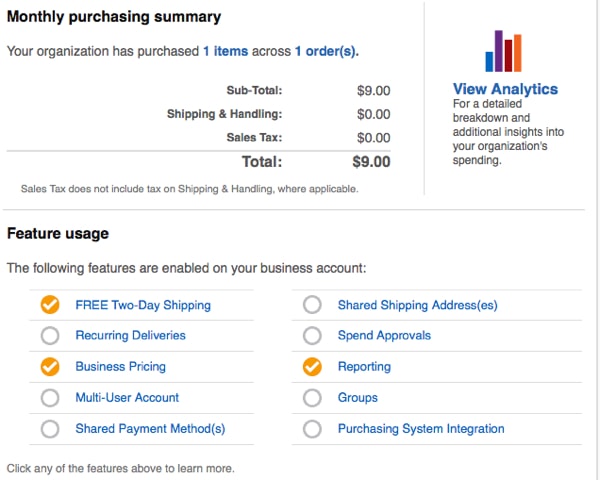 Amazon Business allows buyers to select different features available to them and others who purchase on behalf of a business.

Prentis Wilson, who testified in March 2016 in the U.S. Federal Trade Commission’s court challenge to the proposed Staples/Office Depot merger (now abandoned), stated that Amazon Business views Staples and Grainger as its main competition and that Amazon Business is a top priority of the company.

Furthermore, the company, which originally focused on selling to small and medium-sized companies, was “pleasantly surprised” that large firms were interested in buying from Amazon Business. Nevertheless, Wilson testified that Amazon Business had no big corporate customers, and unlike Staples, did not bid for customers’ business or negotiate contracts with large corporations. However Wilson left open the possibility that eventually Amazon Business could do those things.

Staples, which derives about 50 percent of its revenue online, stated that the merger was necessary to combat Amazon Business’s takeover of the online space. Wilson countered that Amazon Business was still in a nascent stage and it would take years before it could challenge Staples, which had $21 billion in revenue in the fiscal year that ended January 2016.

Grainger, which specializes in maintenance, repair and operating products (MRO), reported 2015 revenue of $10 billion, with 41 percent of sales online. To win customers from Grainger, Amazon Business is expanding its MRO products, particularly in the life sciences industry.

It also deploys custom pricing as a key differentiator. Vendors that sell on the Amazon Business marketplace can set negotiated prices with customers. However customers also see what other Amazon Business vendors are charging for that product. If another marketplace price is lower than the negotiated price, the customer can buy from another seller. Grainger does not have that option.

Amazon presumably wants to dominate the B2B side of ecommerce just as it does B2C. Amazon has transferred the options and expertise from the B2C side to Amazon Business. With the technology and tools that it is developing to serve the needs of businesses, Amazon Business will likely provide a menacing challenge to both Staples and Grainger.