An Arms Race of Ecommerce Data Is Coming

Consumer brands and large retailers are creating data-driven infrastructure and workflows that could impact the entire ecommerce industry, according to a performance analytics firm.

Online retail sales in 2020 grew 27.6% worldwide from 2019, reaching an estimated $4.28 trillion, according to eMarketer. Latin American ecommerce sales leaped 36.7% in 2020, and North American online sales rose 31.8% as both regions outpaced the rest of the world in terms of ecommerce expansion.

The industry’s explosive growth and physical store closures associated with the pandemic forced many businesses to shift their attention to online sales.

“A lot of big brands — especially brick-and-mortar — have built a very data-centric culture. They had a lot of data coming in from Nielsen and IRI [a research firm],” said Mike Black, chief marketing officer at Profitero, an ecommerce analysis platform.

As the pandemic forced changes in retail shopping, some of the big brands Black described were relatively behind in ecommerce infrastructure and data collection. That changed quickly.

“What we see now is that a lot of large brands like [The Procter & Gamble Company] and Unilever are investing in sophisticated analytics to win on ecommerce. We see ecommerce teams and data analytics teams starting to grow at a great scale as they recognize the huge opportunity,” said Black, who, along with Califia Farms VP of Ecommerce Halee Patel Newton, was speaking during a live interview for CommerceCo by Practical Ecommerce on May 27, 2021.

Large businesses that invest in data have the potential to change the industry’s “competitive context,” according to Black, who said that survey data shows that brands using performance analytics tended to outperform their overall industry category by as much as 70%, but that only about 20% of all brands use such analytics.

Perhaps relatively small brands and retailers — some digital native vertical brands, so-called challenger brands selling through traditional retail business, and even small retail chains — do not have the budget for performance analytics or the staff to deploy them adequately.

If true, this could create something of an ecommerce data or analytics arms race, wherein companies with the wherewithal to use data more effectively gain a significant advantage. Or as Black put it, “You can unlock value and create growth at an outsized rate relative to your competitors.”

For many brands during the pandemic, Newton said, “The mandate was to lean into ecommerce whether you were profitable or not. For us, that meant many new [competitors], and many [of those competitors] will be advertising. We had to step back and figure out where we could be competitive.”

Califia Farms’ products were doing well online. But in 2020, so was everyone. Newton wanted to understand how her company was performing relative to her competition. She wanted to ensure Califia Farms was getting at least its share of the growth. She wanted business intelligence that would help her seize opportunities despite the increased competition. Fortunately, she had that data.

Most of Califia Farms’ products are refrigerated milk made from nuts. But the company also has several products that are “shelf-stable” — they do not need to be chilled and thus are well-suited for ecommerce.

Using performance analytics, Newton was able to identify an increase in demand for shelf-stable milk and creamer.

“The search term that just popped in March [2020] was ‘stable milk.’ Everybody wanted it,” said Newton. 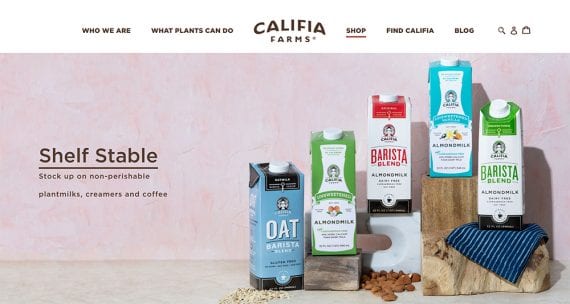 Shelf-stable milk represented an opportunity for Califia Farms, but the company could have missed it without data about which terms were trending on Google and Amazon.

Califia Farms enjoyed immediate results, boosting sales of those shelf-stable products as a direct result of understanding how potential customers at that very moment.

Although it is a small brand next to its competitors, Califia Farms was able to use data to gain an advantage in a niche product category.