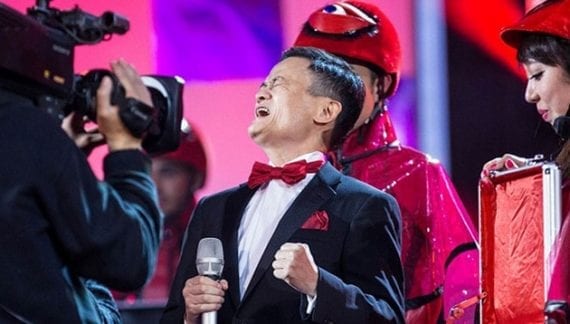 Starting in 2009, Alibaba has turned Singles Day, Nov. 11, into a shopping extravaganza. This year the total gross merchandise value of goods sold on its marketplace on Singles Day was $17.8 billion. Jack Ma, Alibaba’s founder, is shown here on Singles Day 2015. Image: Bloomberg.

Ignoring concerns about their country’s slowing economy, Chinese shoppers spent a record amount of money in the 24-hour period on Nov. 11 known as Singles Day.

Written numerically, 11.11 represents “bare branches,” a local expression for single men and women. In 2009 Alibaba Group Holding Ltd. turned this obscure holiday started by college students in the 1990s into a shopping extravaganza.

This year the total gross merchandise value of goods sold on its marketplace on Singles Day was $17.8 billion, compared with $14.3 billion in 2015. The 2016 sales figure is about four times what worldwide Black Friday sales are expected to be this year. Alibaba’s main Chinese competitor JD.com didn’t post sales numbers, but said that it had received more orders than it did in the past five Singles Days combined and that its gross merchandise volume grew 140 percent compared to 2015.

Analysts were concerned that Chinese consumers might cut back on their Singles Day spending. But deep discounts — some over 50 percent — lured consumers online. Within the first five minutes of the event, Alibaba sold $1 billion worth of merchandise, primarily through its Tmall B2C marketplace.

Mobile devices accounted for a staggering 82 percent of sales.

Perhaps because of concerns about fewer sales, Alibaba also made the day a major entertainment event with a televised concert and contests and the participation of several American and European sports and movie celebrities.

How does Alibaba handle such a large sales volume and get the goods delivered? Through vertical integration. Over the past three years Alibaba has implemented a sophisticated self-contained ecommerce ecosystem. Alipay, the company’s version of PayPal, accommodated more than one billion transactions during the 24-hour sale. Alibaba’s logistics subsidiary, Cainao, facilitated the delivery of 657 million packages.

This efficient system gives Alibaba an advantage over many of its competitors.

This year, for the first time Alibaba reached out to shoppers in Hong Kong and Taiwan. Next year it plans to target all of Southeast Asia. More than 14,000 international brands participated in the 2016 sale, contributing about 37 percent of total gross merchandise value, according to Alibaba. Orders came from over 150 countries.

Going forward, if the Chinese economy worsens and people have less disposable income, Alibaba may have to rely more on foreign sales to keep its momentum going.

Trouble on the Horizon?

Beyond Singles Day, Alibaba has drawn scrutiny regarding how it tallies overall gross merchandise volume. The U.S. Securities and Exchange Commission has been looking into data from 2015 amidst allegations that the total may include sales faked by third-party merchants or transactions that haven’t been paid for.

The Chinese State Administration for Industry and Commerce is also investigating. The agency called the largest online retailers, including Alibaba, JD.com, Tencent Holdings, and Amazon to a meeting and warned them about inflating sales and knowingly promoting fake products.

Another potential problem is President-elect Trump’s threat to impose 45 percent tariffs on imports from China. Last year China’s exports to the U.S. amounted to $483 billion and with such a high tariff, U.S. bound exports could dramatically decline. Alibaba may look more to consumers in Europe and Southeast Asia if Trump voids existing trade agreements.