China is the world’s largest ecommerce market. What is unique about Chinese cross-border ecommerce is that large amounts of transactions flow both ways. Chinese consumers are heavy buyers of foreign goods, and Chinese merchants sell massive amounts of goods to international markets where people are looking for inexpensive items.

While Chinese businesses sell large amounts of goods online in the B2B market, in this article I will focus on B2C sales.

Total Chinese ecommerce sales (domestic and cross-border) amounted to $1.2 trillion in 2017, an increase of 32 percent over 2016, according to China’s Ministry of Commerce. The ministry predicts ecommerce will grow at an annual rate of 30 percent over the next few years. Much of the growth will occur in cross-border sales.

China-based cross-border ecommerce sales to 200 countries were worth $140 billion in 2017 according to Chinese ecommerce solution provider Azoya Consulting.

Tens of thousands of China-based vendors now sell their products internationally online through Amazon Global Selling, a mechanism that leverages the online marketplace’s branches in 10 countries, including the United States, the United Kingdom, Germany, Canada, Japan, and Australia. Most popular products are smartphones, PCs, and electronic accessories.

JD.com, a Chinese ecommerce behemoth — and recipient of a recent $550 million investment from Google — rolled out its cross-border B2C platform in 2015, with Spanish, English, and Russian versions.

Chinese consumers are eager to buy foreign goods because they believe that foreign products are of a higher quality and are less likely to be counterfeit. This is especially true of cosmetics, baby products, and food. In the past, tainted Chinese baby formula caused the death of some infants. Consequently, Chinese consumers don’t universally trust local brands.

Chinese shoppers will conduct extensive online research on foreign products before purchasing and will also consult with family and friends who may have purchased similar goods overseas.

Chinese consumers purchased $100.2 billion on goods from sellers in other countries in 2017, with the average spend per buyer (for the year) at $882, according to research firm eMarketer. The company estimates that in 2018, 249 million Chinese consumers will purchase products through cross-border ecommerce, known locally as “haitao,” or “buying overseas.”

According to Azoya Consulting, cross-border ecommerce shoppers in China come from large cities and are well educated and more affluent. They are relatively young — 36 percent are 19-29 years of age and the remaining 64 percent are 30-40.

Online merchants that want to sell to China-based consumers should use a Chinese marketplace that specializes in cross-border sales versus selling from the merchants’ own ecommerce sites.

This is especially the case for smaller sellers without a name brand. Millions of Chinese shoppers are familiar with domestic online marketplaces. But they may have difficulty finding smaller sites. They also have greater trust in the marketplaces. Chinese consumers rarely buy overseas products from standalone websites or third-party platforms located outside of China. More importantly, the marketplaces are in Chinese and sales are in the local currency, the renminbi — RMB.

It is usually necessary to employ a Chinese third-party service provider, called “TP” for “Tmall Partner” or “Trade Partner.” These agencies offer foreign companies without a business entity in China access to Chinese cross-border ecommerce platforms. The larger platforms such as Tmall Global and JD Worldwide only accept foreign merchants who work with TPs who are certified by these ecommerce platforms.

Tmall Global is the cross-border version of Tmall — China’s leading domestic online marketplace. Owned by Alibaba Group, it was launched in 2014 and sells only imported merchandise via foreign merchants’ stores hosted on Tmall’s website. Tmall offers country pavilions that bundle products from the same country on one page. It uses Alibaba’s proprietary Alipay for payments. 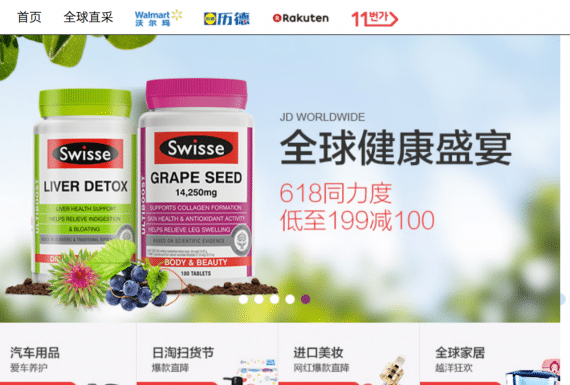 Suning Global. Launched in 2014, this is the cross-border online mall of China’s largest commercial company, Suning. It features roughly 300 foreign storefronts and offers store operator and financial support services. The most popular product category is electrical appliances. It uses its own online payment escrow service, Yi-Pay, to complete transactions in RMB or foreign currencies.

Amazon China Global Store. This is Amazon China’s haitao platform for Chinese customers. It uses Alipay, Tenpay, and UnionPay to complete transactions in RMB or a foreign currency. 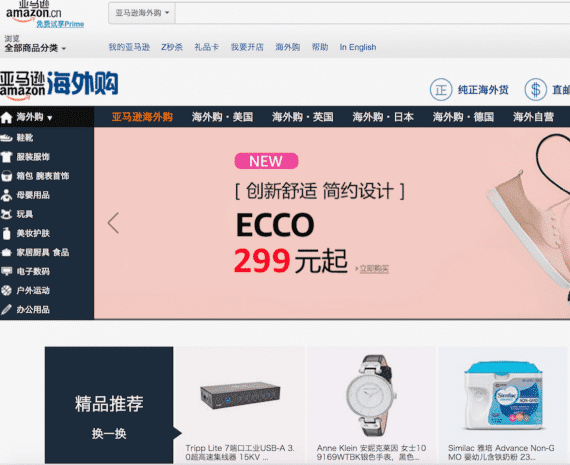 All of these marketplaces require security deposits and commission fees. All except Amazon China also collect an annual platform fee. They also offer different business models — either allowing merchants to perform logistics themselves or performing the warehousing and delivery for them.

“Hypermarkets” directly purchase large quantities of overseas goods. There are no branded storefronts. Overseas merchants sell their goods to hypermarkets at a negotiated wholesale price. The hypermarkets then charge a markup.

Kaola is a cross-border ecommerce hypermarket with the largest bonded warehouses in China. Merchants from roughly 40 countries sell their products on the Kaola platform.

JD.com also operates a hypermarket business. For this model JD Worldwide acts as a middleman, purchasing inventory from overseas companies and reselling it to Chinese consumers.