Scandinavia is an affluent market with an appetite for foreign goods. The Nordic region — Scandinavia — encompasses Denmark, Finland, Norway, and Sweden. Individually, each country may not seem to be an attractive cross-border opportunity for merchants. Combined, the population is just 26 million.

However, Nordic ecommerce is primarily driven by foreign merchants that give consumers access to goods that they are otherwise unable to find in local physical stores. The only country with a strong domestic online merchant presence is Sweden, but cross-border shopping is very prevalent there as well. Almost all Scandinavians speak English but they prefer to see websites in their native languages.

PostNord, the Swedish postal service, is a provider of communications and logistics solutions in the Nordic region. According to “E-commerce in the Nordics 2017” (PDF), PostNord’s comprehensive analysis, the region generated US$23.7 billion in ecommerce revenue in 2016.

What follows are additional insights from the PostNord report.

Scandinavians enjoy multiple options for receiving their goods. Most countries have 24/7-accessible self-serve parcel machines. This option is particularly popular among Finns. Distribution points (usually a partnership with a physical store) are popular in all the countries, particularly in Sweden where 37 percent of online consumers prefer to get their goods this way.

Over one-third of online consumers in the Nordic region make monthly purchases from international ecommerce websites. Consumers in Finland and Norway are more likely to purchase from outside the region than those in Sweden and Denmark, where more domestic online alternatives are available.

In 2016, purchases from foreign merchants accounted for 25 percent of total ecommerce expenditures in the Nordic countries. For Swedes and Norwegians, the United Kingdom and China are the most popular countries to purchase from, while Danes prefer the United Kingdom and Germany. For Finns, Germany and China are the most popular sources. Norwegians are most likely to purchase from U.S. merchants.

Apparel and footwear are the most popular online purchase items, followed by consumer electronics. Beauty and health products are popular among younger people.

Facebook is the most popular social media platform in Scandinavia. YouTube also has a strong user base. However, Scandinavians rely on email more than any other form of communication so marketing via this method reaches a broader audience.

Sweden has the largest population of the Scandinavian countries with 9.9 million people. Sixty-seven percent of the total population purchased goods online in 2016. Males and females shop online at the same frequency. Sweden has the lowest rate of cross-border online purchasing — 29 percent — because Sweden has more domestic online merchants than other countries in the region. Eighty-three percent of Swedes expect free returns and 75 percent expect one-to-two day delivery. Sweden is the most advanced country in the Nordic region in terms of mobile commerce.

Webgallerian is a Swedish online marketplace relaunched this month with a more customer-friendly platform. Ingemar Gleissman, founder and C.E.O. of Webgallerian, says the company wants to be the Amazon or Alibaba of the Nordic region. The goal is to create the largest online marketplace with approximately 2,000 e-retailers and over 3 million products.

Currently, there are over 140 Swedish online stores on the site that offer more than 425,000 products. The site provides a channel mainly for smaller merchants and provides payment and logistics assistance to them. 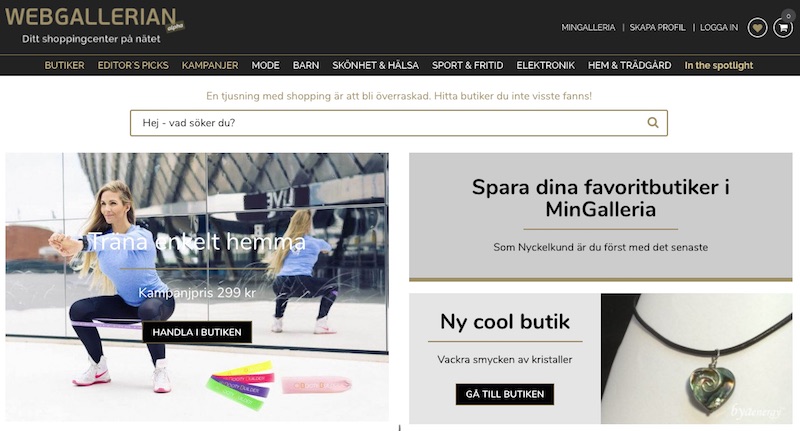 Webgallerian, a Swedish online marketplace, wants to be the Amazon or Alibaba of the region.

Norwegians value a variety of delivery mechanisms, including the ability to pick up an item at a partnering brick-and-mortar store. Free returns and free shipping are important to Norwegians. Only 40 percent think that a mobile-friendly website is important.

Norway is the only Nordic country that is not a member of the E.U. Therefore it has its own regulations for value-added tax and import duties. In general, international merchants are exempt from VAT.

Denmark has a population of 5.7 million. Over 90 percent of residents made online purchases — women aged 30–45 years were the most frequent. Thirty-two percent of Danes make online purchases outside the country. Eighty percent consider free returns to be important. Sixty-three percent shop online every month.

Finland’s population is 5.5 million. Finns like to purchase from outside the Nordic region due to lower prices and a large assortment of products. Finland has the highest percentage of cross-border shoppers at 46 percent of the population.

Only 20 percent of online shoppers use mobile devices to make online purchases. This is an especially low percentage considering that Nokia, one of the first mobile phone vendors, is based in Finland.

Finns like to buy do-it-yourself assembly kits and outdoor and sporting goods. Finnish merchants typically pay return shipping charges as it used to be required by law. Therefore 80 percent of Finns consider free returns to be very important. The country has the highest rate of returns in the region with a 14 percent monthly return rate.

Merchants already selling in Western Europe may find the Nordic market a good addition. The population is prosperous, speaks English, and is eager for foreign goods.