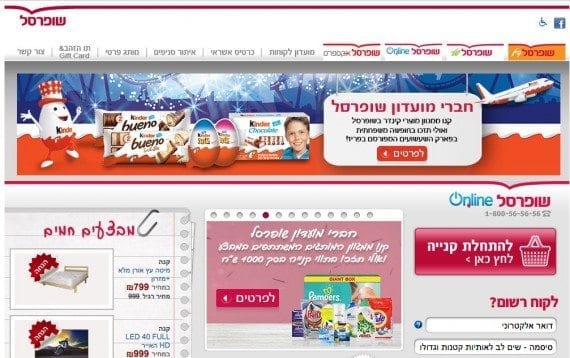 Israeli consumers seek affordable goods from foreign companies. Shufersal Yashir, the digital branch of the largest supermarket chain in Israel, is the largest domestic ecommerce site in terms of visitors. Virtually all consumers in Israel speak and read English.

With a population of 8.2 million, Israel may not seem like a particularly lucrative ecommerce market. However because of unique domestic circumstances, Israel is an excellent candidate for cross border ecommerce.

Only one-quarter of Israeli businesses sell online and their prices are much higher than those of foreign companies because of high value-added taxes (VAT) and monopolies on many consumer goods. According to the Israel Internet Association, 75 percent of Israelis make online purchases — mostly from China, followed by the U.S., the U.K., and Brazil. Seventy-nine percent of online Israeli shoppers have made purchases from foreign sites, according to a joint study from PayPal and Ipsos, the global research firm.

Receiving goods ordered online from an Israeli company can be an ordeal. Many domestic online orders are never delivered by Israel Post and orders that do reach customers can take weeks to arrive. In contrast, orders from Amazon are delivered usually in five days. Foreign goods are also much less expensive, putting Israeli companies at a disadvantage.

While Israel is known for innovation and sophisticated technology, its consumer goods are often inferior in quality to those made in foreign countries and more expensive. Residents are eager to purchase everything from jeans to shoes to kitchen gadgets from foreign countries. China’s Alibaba, the largest ecommerce company in the world, has invested in several Israeli technology startups. Israelis like to purchase goods from Alibaba, which contributes to Chinese companies, collectively, being the top ecommerce destination for Israelis.

The largest domestic ecommerce site in terms of visitors is Shufersal Yashir, the digital branch of the largest supermarket chain in Israel. One Israeli company, Buy2Networks, is attempting to implement one-day delivery to most major cities.

According to research firm Statista, 2016 ecommerce revenues in Israel will amount to $3.6 billion and rise to $4.9 billion in 2020, a compound annual growth rate of 8.3 percent. Consumer electronics and media comprise the largest sales segment, garnering 32 percent of all revenue. Food and beverages are the second largest category.

The average annual revenue per user is $904. Males dominate both the 25-to-34 and 35-to-44 age groups of ecommerce buyers. However the 16-to-24 age bracket is heavily female.

Almost all Israelis speak and read English. There is no need for a Hebrew website. Mobile penetration is well over 100 percent.

Earlier this year the Israeli government changed its rules to make foreign companies subject to VAT collection on digital services. A company must collect VAT if it has an online presence targeting Israeli consumers, has representatives seeking to find Israeli customers, or has a web presence targeting Israeli consumers. Downloaded apps, software, music, games, television programs, films, and online gambling are all subject to the country’s 17 percent VAT.

However, physical products are often exempt. Physical goods worth up to $75 are exempt from all taxes and purchases of up to $500 are exempt from VAT. So, for example, Amazon has to charge VAT on virtual products like ebooks, but not on physical books costing less than $75.

Israelis are avid credit cards users with MasterCard being the most popular. PayPal is growing in popularity. Other leading payment processing firms include the following.

In short, Israel represents an excellent opportunity for foreign sellers of consumer goods because of high retail prices in Israel and the lack of domestic ecommerce competitors. The country’s middle class is looking for high quality, less expensive goods and are willing to buy from foreign ecommerce merchants.