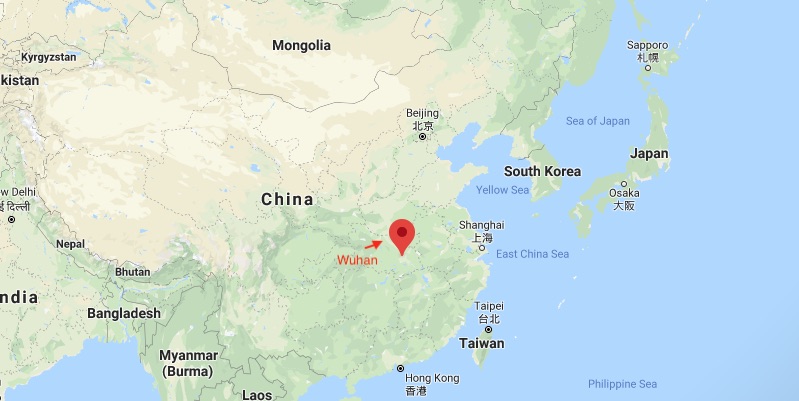 The coronavirus was first detected in Wuhan, in central China, a densely populated area with many manufacturing plants. Image: Google Maps.

When the coronavirus outbreak emerged in Wuhan, Hubei Province, Chinese authorities asserted that it was localized, albeit in an area with a large population and many manufacturing plants. Then the virus spread to other areas of China.

The government extended the New Year holiday on January 25 by three days and has now imposed travel restrictions on around 60 million people. Throughout the country, officials have instructed residents to stay home and avoid public places. Frightened residents have stocked up on food, toilet paper, and disinfectant, leading to shortages.

Many analysts thought that online purchases of goods in China by people stuck at home would alleviate the problem and create a boon for ecommerce. But that has not occurred because of the difficulty of delivering the orders. Transportation has become a choke point. Items that have already been produced, or have been ordered or are being ordered, are unlikely to arrive on time.

Chinese ecommerce platforms such as Alibaba and JD.com are hiring thousands of temporary workers, as government-imposed travel restrictions have increased consumer demand for online grocery delivery services. Meicai, an online food retailer that delivers fresh produce straight from farms to restaurants and stores, announced a few days ago that it was looking to hire 6,000 truck drivers and 4,000 sorting handlers to supplement its regular workforce that cannot keep up with demand. The Chinese government has asked delivery people to wear face masks and conduct temperature tests on themselves.

Alibaba has also set up a dedicated website, Global Direct Sourcing, where it publicizes what equipment and goods are in short supply and asks for suppliers.

Air. Cathay Pacific, a major cargo airline for China and Hong Kong, has reduced flights to mainland China by 50 percent through the end of March. UPS has canceled 22 daily flights to China. Both UPS and FedEx have said that flying into China will be voluntary for their pilots. FedEx usually operates 220 flights a week in and out of five airports in China, where it has 9,500 employees. DHL has suspended deliveries in Hubei province, the epicenter of the virus. As a result, air freight prices have already increased. The few incoming cargo flights are bringing in high priority items such as surgical masks and medical equipment, not consumer goods.

Joe Cipolla, senior director of air freight at Crane Worldwide Logistics, told Air Cargo News that because of the virus there is a lack of cargo space heading into China and Hong Kong, with shortages in the outbound direction expected to follow. “For those carriers still flying freighters, the demand is very high, booking could be four to seven days out,” Cipolla said. He added that he is expecting a surge in outbound demand and space shortages from China once factories restart production.

Ships. Many ships are stuck in “floating quarantined zones,” as countries, including Australia and Singapore, refuse to allow ships that have called at Chinese ports to enter their own ports until the crew has been declared virus-free. Major shipping companies have reduced the number of vessels on routes connecting China and Hong Kong with India, Canada, the United States, and Africa. Logistics company Freightos told its clients to expect delays in goods from China and suggested they shift incoming shipments from sea to air or try to source products from other countries. 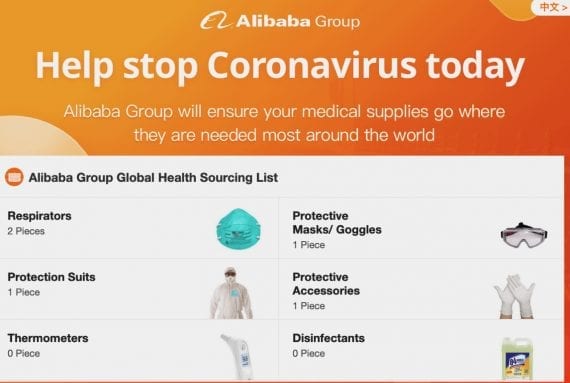 A dedicated website from Alibaba, Global Direct Sourcing, publicizes equipment and goods that are in short supply and asks for suppliers.

China consumers are critical for the luxury goods market, both in the U.S. and abroad, with Chinese customers accounting for about 35 percent of worldwide sales, according to S&P Global.

Those retailers that manufacture in China and sell products there are enduring a double hit.

Under Armour reported that it expects the coronavirus to lower its sales by at least $50 million during the fiscal first quarter. According to CEO Patrik Frisk, “We think it’s reasonable to expect industry-wide delays in terms of delivery around the world — including potentially missed shipment[s] and service windows, and the need for increased air freight and additional measures at ports that could create unforeseen congestion.”

The toy industry is particularly at risk, according to Swiss investment bank UBS. China supplies about 85 percent of the U.S. toy industry. While toymakers Hasbro and Mattel have decreased their reliance on factories in China, more than half of their toys are still produced there.

Hyundai Motor indicated earlier this week that it would gradually increase production at seven of its South Korean plants that were shut down because of a lack of parts from suppliers in China. Ford Motor also said it is gradually resuming production at its plants in China. GM and Toyota manufacturing plants have not yet re-opened.

The coronavirus is a new strain, which makes it difficult for medical personnel to predict how it spreads and how long it will take to control it. If new cases continue to appear — in China and elsewhere — constraints on the movement of people and goods will stay in place. That will have an increasingly detrimental effect on the entire supply chain and the global economy.