Does ‘AMP for Email’ Impact Ecommerce?

Google just introduced “AMP for Email” and announced plans to include it Gmail later this year. In this post, I will explain AMP for Email and its potential impact on email marketing for merchants.

“Accelerated Mobile Pages” is an open-source initiative to improve load times for mobile pages. AMP’s popularity has increased considerably during the past few years. According to Google, there are roughly 31 million domains that are serving AMP pages, which is three times more than just 12 months ago.

AMP has evolved to include more advanced capabilities, such as accepting user input, displaying interactive elements such as carousels, and the ability to fetch fresh data.

Email messages are mostly static. Once delivered, an email’s content stays the same. Adding AMP to an email will make the content dynamic and changeable — after it’s delivered. Google cites examples, such as giving the recipient the ability (without leaving the inbox) to fill out a questionnaire, respond to an invitation, or schedule an appointment.

The idea of including live content could bring mobile sites into the email itself. Consumers could browse or shop without visiting the site. An email could update information in real time. Instead of sending multiple emails, an airline could simply load fresh data into the original version, to update automatically. Content sites could update, as examples, headlines, weather information, and stock prices.

Email is predominately HTML. For AMP to function, an email message would require a third MIME version — Multipurpose Internet Mail Extensions — that would display for AMP recipients.  The HTML version would show for clients that render only HTML. This is similar to responsive design for email.

Google created an AMP for Email specification on the GitHub repository so that developers and designers can create AMP templates.

AMP for Email offers pros and cons for ecommerce merchants. First the pros. 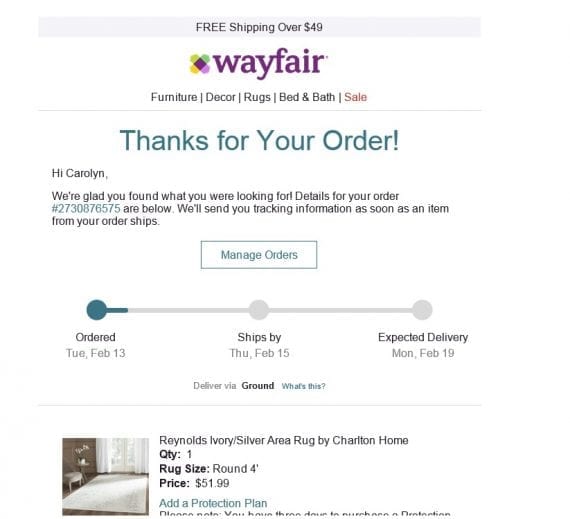 Using AMP, an order confirmation email from a retailer could be updated in real-time as the product is shipped and delivered. Source: Wayfair.

Cons. Email is popular, in part, because of its simplicity. The technology is largely unchanged from its inception years ago. Consumers rely on email every day.  A change could disrupt the longstanding email-to-website relationship. By bringing dynamic, live content into an email, click rates would presumably decline.

In fact, a goal for AMP in Email is to allow recipients to not open a web page. This simple process — opening a web page from an email — is commonplace. The effort is minuscule. Allowing more functionality within the email may be restrictive, as recipients may end up leaving their inboxes anyway to obtain the desired features and user experience.

AMP-delivered transactional emails, such as order confirmations and shipping statuses, presume that the recipient does not delete the original version. If recipients do not realize the email will be dynamically updated, they could delete it and thus miss subsequent vital information.

It’s worth noting that AMP for Email is not entirely revolutionary. For example, Movable Ink, an email technology provider, can dynamically generate content in the body of an email when recipients open it.

This email from Finish Line uses Movable Ink’s agile email platform to display content specific to the recipient’s geography, at the moment the email is opened.

How will email service providers respond to AMP for Email? Its adoption and use will likely grow if it helps consumers and brands.