Generation Z Is the Most Coveted Retail Demographic

Generation Z is replacing Millennials as the most coveted retail demographic cohort. With $44 billion in spending power according to Forbes magazine, Generation Z is being courted by brands and retailers.

The Millennial generation consists of those born between 1981 and 1996; the oldest among them are close to 40.

Generation Z is defined as those born between 1997 and 2012, ranging in age from 7 to 22, according to the Pew Research. Center. This cohort contains about 74 million people, roughly the same as Millennials. Not surprisingly given their ages, 62 percent of Gen Z members live with their parents, and 55 percent are students, according to research firm GlobalWebIndex.

…the oldest among them are close to 40.

Generation Z members are more optimistic than Millennials, who endured a major downturn in the economy when many were entering the workforce. Most of Generation Z is not yet saddled with student loan debt from college, something that is part of the lives of many Millennials well into their thirties. This younger generation is more confident of their ability to make a living doing something they like.

However, they are also cautious about spending money. A desire for financial security has prompted them to avoid incurring debt whenever possible — 40 percent of those aged 18 to 22 have no debt, according to pollster Morning Consult. They have fewer credit cards and prefer using debit cards. They don’t feel the need to own big-ticket items such as houses and cars (there’s Uber, after all).

Unlike Millennials, members of Generation Z are not only digital natives, but they are also social media natives and mobile-first. Some of them may have only a sporadic or non-existent relationship with a landline or a notebook or desktop computer. A smartphone is the device of choice, and spending seven hours a day online is common.

Gen Z is more likely to find out about new products on social media, usually Instagram or YouTube, according to a survey by Businessweek/Morning Consult. Seventy-five percent of Generation Z can be categorized as “celebrity networkers” according to GlobalWebIndex. They are 1.4 times more likely than the typical internet user to follow celebrities or celebrity news. 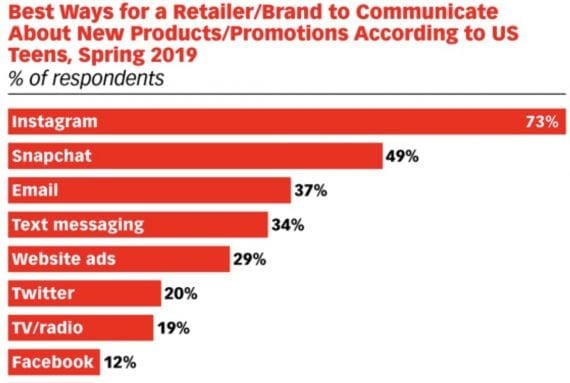 Generation Z is most likely to hear about new products from online advertising and search engines. They are not big users of consumer review sites. Gen Z members spend an average of 2 hours and 52 minutes a day on social networks and messaging services, according to GlobalWebIndex, often researching products and sharing information with friends.

Nevertheless, Gen Z members are willing to shop in physical stores, especially those that offer a personalized experience. Many of these stores are ecommerce brands that have brought their online experience to the physical world, such as Warby Parker (eyeglasses) and Everlane (apparel). Female members of Generation Z are rediscovering malls.

It’s important for merchants to optimize the mobile experience because Gen Z individuals use smartphones to shop online. Even when shopping in a physical store, they will use their smartphone.

Generation Z believes in corporate social responsibility and that companies have a duty to behave ethically in how they treat employees and what they put in their products. Giving to causes that resonate with Generation Z, such as the environment, also gets their attention. Retailers should highlight social responsibility when marketing to this demographic.