Over the past couple of years Google Ads has expanded the use of close keyword variants. I wrote about the initial change in April 2017, in “AdWords: Exact Match Not So Exact Anymore,” when Google altered the match type to include not just misspellings and plurals, but also function words, rewording, and reordering.

Then, last December, I wrote “Google Ads: ‘Exact Match’ Keeps Getting Less Exact,” which described how Google expanded even further to include implied words, paraphrasing, and words with the same intent. Again, this was limited to the exact match keyword type.

Now, Google has again expanded the use of close variants.

In the coming weeks broad match modifier and phrase match keywords will also begin matching to words within the search query that share the same meaning as the keyword.

Each of these match types is different. I’ll look at each one.

Phrase match. The purpose of the phrase match keyword type was to ensure that the desired keywords remained in the order specified. Other words and phrases could precede or follow, but that phrase needed to be present to trigger an ad impression. Now Google can swap out the words for close variants. Here’s an example supplied by Google.

With phrase match, Google can swap out the words for close variants. This example from Google matches “grass cutting service near me” with “lawn mowing service prices.”

The example above isn’t the best. The matched queries from the “before” column both include purchase intent words “prices” and “rates.” However, the “after” column queries don’t include them. Companies that provide lawn-mowing services are likely much more interested in the queries that include pricing, as it indicates the searchers are further into the decision process.

Broad match modifier. The purpose of the broad match modifier (adding a “+” sign before a word) was to indicate to Google that you wanted that specific word to appear in a query if your ad was going to show. But now, with the new change, Google can pick a close variant. Google’s example is below.

In this example from Google, +lawn and +mowing is being matched to “grass cutting” and “cut your grass.”

Note that the +lawn and +mowing keywords are being matched to “grass cutting” and “cut your grass.” The intent is very similar, and the keywords themselves are synonyms. This is helpful, but your accounts might have less stellar examples. Consider this tweet from Julia Vyse, a digital media consultant:

Here’s a fun one for the ongoing Close Variant Catastrophe of 2019: energy efficiency FOR businesses, rather than energy businesses/consultants. That ‘for’ is the key to a small business getting help with upgrades versus a consultant getting clients. 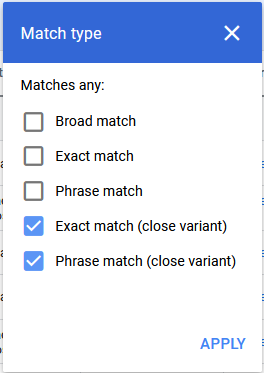 Scroll to the bottom of that chart for totals.

Totals of close variant performance. For this campaign, 48 out of 419 total clicks came from close variants, which produced zero conversions despite the higher click-through rate (31.17% vs. 12.87%). Click image to enlarge.

For this campaign, 48 out of 419 total clicks came from close variants and has produced zero conversions despite the higher click-through rate (31.17% vs. 12.87%), which, incidentally, could be an algorithm factor to assess the relevance of these close variants.

With a larger dataset we might see better performance for the close variants. But in this example (a B2B service provider), I added keywords intentionally, and the conversions validate it.

Or consider the following nouns (courtesy of Melissa Mackey, a pay-per-click practitioner): scan, scanner, and scanning. Each has a distinct meaning, but machine learning could match these as close variants. Moreover, scan is both a verb and a noun. Most search queries are not full sentences. Even a human could have a tough time knowing the intent, hence the reason for the previous extensive keyword structure and match types.

In short, Google Ads is headed full steam to more automation. This latest change gives the machine-learning algorithms more latitude, which increases the number of impressions and clicks, among other metrics. That increased volume of data should improve the results over time.

But meanwhile, advertisers should diligently monitor their search terms reports. Add more negative keywords to eliminate waste. Also, ensure your conversion tracking is set up correctly. This will send the right signals to Google Ads. The result should be improvements that benefit your campaigns.