ICOs Are the Newest Form of Alternative Funding

If words like cryptocurrency, cryptocoin, Bitcoin, and blockchain befuddle you, you’re not alone. Even the U.S. Securities and Exchange Commission, the agency that is meant “to protect investors, maintain fair, orderly, and efficient markets, and facilitate capital formation,” is having a hard time keeping up with all the new alternative funding mechanisms.

The latest funding craze is an Initial Coin Offering, an “ICO,” which is a new form of crowdfunding using cryptocurrency. According to Cointelegraph, an online magazine, a cryptocurrency “is a digital or virtual currency designed to work as a medium of exchange. It uses cryptography to secure and verify transactions as well as to control the creation of new units.”

The latest funding craze is an Initial Coin Offering, an “ICO,” which is a new form of crowdfunding using cryptocurrency.

ICO “coins” are tokens issued on a distributed ledger, or blockchain, which is a platform that supports a cryptocurrency. The tokens can readily be traded, but unlike stock shares, they do not confer ownership rights. Investors bet that successful products will result in an increase in the value of the tokens.

An ICO mimics a reward-based crowdfunding campaign that utilizes pre-sales of a product in exchange for a donation to raise working capital. With an ICO, a company builds a community of stakeholders who will benefit from “purchasing” the product before its manufacture. The tokens become functional units of cryptocurrency if the ICO’s funding goal is met and the project launches.

Interestingly, venture capitalists, who strenuously objected to equity crowdfunding, are showing great interest in ICOs. The first reason is profits — cryptocurrency investors have enjoyed substantial returns. The second reason is the liquidity of cryptocurrencies. Investors can achieve financial gains more quickly than waiting years for an initial public offering or acquisition, which are the usual exits for VC funded start-ups.

Also, tokens can easily be converted into Bitcoin or other cryptocurrencies on an exchange. Then it’s easily converted to traditional currency via online services such as Coinsbank or Coinbase.

Established venture capital firms like Andreessen Horowitz, Sequoia, and Union Square Ventures have invested millions of dollars in cryptocurrency hedge funds. They have invested in all types of blockchain projects.

Since 2016, venture capital firms have invested millions of dollars in all types of blockchain projects.

A new cryptocurrency is created on a blockchain application platform such as Ethereum or Openledger. People behind the ICO arbitrarily determine what they think the company or project is worth. The ICO is marketed to the public and using price dynamics arrived at by market supply and demand, the network of participants sets a value for the token. The companies that issue an ICO are typically at a comparable stage of development to start-ups that are seeking angel funding.

Similar to a Kickstarter crowdfunding campaign, an ICO usually takes place over a period of weeks. It is divided into a pre-sale period and a public sale period, with a funding cap that must be reached for the project to launch. A pre-sale token sale round is restricted to select individuals or institutions that are placed on a “whitelist” and allowed to buy coins before a public sale.

Only a pre-sale round gives a bonus percentage of coins to participants and sometimes requires a minimum contribution amount. A pre-sale is a way to build momentum for a project and attract early supporters by guaranteeing them an allocation of tokens. The public sale period follows and usually lasts longer than the pre-sale period. It is open to all participants who register with the project on its website.

Once the pre-sale or public sale period gets underway, individuals contribute funds by sending Bitcoin (BTC) or Ethereum (ETH) to a designated wallet address. If the project reaches its funding goal, tokens of the new cryptocurrency are sent to investors when the coin is launched. If the project does not meet its funding goals, contributed funds will be returned, similar to a Kickstarter campaign that does not meet its goal.

Once a project reaches its funding goal and distributes the newly created coins, it lists on an exchange — Bitbank, Coinbase, CoinExchange, Coinsquare, CoinEx — where it can be traded live. Holders of the coin can then trade their stake and new buyers can participate. There are currently over 50 cryptocurrency exchanges.

Entrepreneurs have raised around $10 billion since the beginning of 2017 via ICOs, according to Mike Orcutt, associate editor at MIT Technology Review. 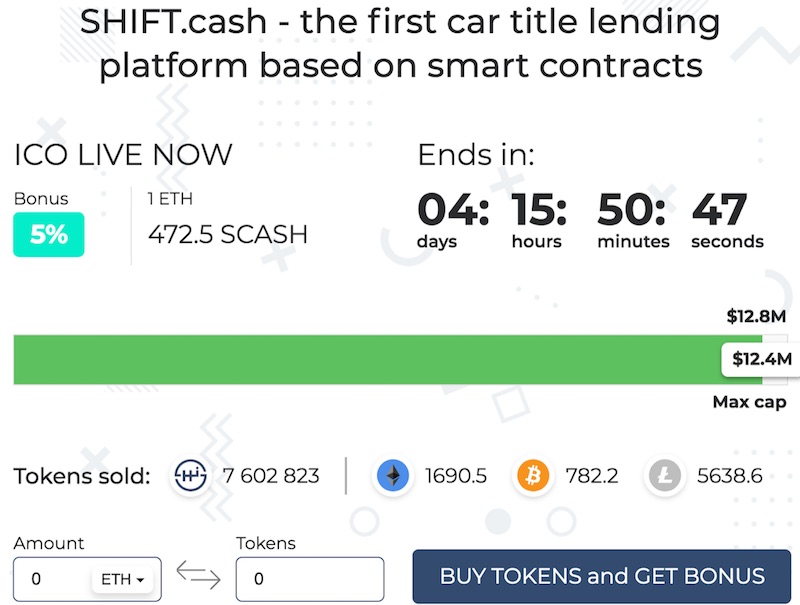 SHIFT.cash is a secured loan platform for issuing quick loans secured by car titles. The company has created a website for its ICO, shown above.

Unlike equity crowdfunding, ICOs are not regulated — at least not yet — so they do not face regulation from the SEC or SEC equivalents in other countries. The individuals who decide to invest in ICOs are participating in a high-risk venture.

However, the SEC has started cracking down on ICOs. A few weeks ago, the SEC issued a release entitled ” Statement on Potentially Unlawful Online Platforms for Trading Digital Assets,” which more than hints at how the SEC feels about ICOs: They are illegal. The SEC’s position is that ICOs are securities and should be registered with the agency like other securities. The SEC is expected to develop regulations for ICOs. Just this week, Massachusetts ordered five ICOs stopped, saying that the companies behind them were selling unregistered securities.

Some companies are starting to develop compliant platforms for issuing and trading “tokenized securities.” To be compliant as an alternative trading system, a platform must receive certification from the SEC.

ICOs and other blockchain investments are too advanced to disappear. However, they will likely come under increased regulation over the next few years.