I’ve addressed iOS 15 twice, explaining its likely effect on email marketing and steps to prepare. In this post, I’ll review the impact thus far, including how marketers should adust moving forward.

First, it’s important to revisit how open rates have never been accurate. Email software embeds a 1-pixel image to capture an open. A recipient who opens an email unwittingly loads that image, which the software tracks. The software doesn’t count opens; it counts image downloads.

It’s a less-than-perfect way to measure opens. It cannot capture:

Some email client software uses text-only messages by default. Examples include smartwatches, gaming devices, and voice assistants. None of those have captured opens since they do not download images.

iOS 15’s Mail Privacy Protection automatically reports every email as having been opened. Thus users who have enacted that protection on their iPhones report as an open, actual or not. Apple iOS accounts for roughly 48% of mobile devices worldwide. And upwards of 80% of email opens occur on mobile devices. The impact, therefore, is potentially substantial.

Brands with a higher percentage of mobile users will experience more inflated open rates. Brands with mostly desktop recipients will see less of an impact. Among my clients at Acxiom, open rates since Sept. 20 have increased by 10-20%. I’m aware of brands with increases of 50% or more.

Regardless, the immediate feedback of instant open rates will likely go away. This includes the testing of subject lines. Marketers have long relied on testing the words, phrases, and timing that prompt recipients to open.

Now, with iOS 15, it’s difficult to A/B test subject lines on, say, 20% of a list and send the version with the highest open rate to the remaining 80%.

Nonetheless, marketers and email service providers are experimenting with workarounds. Litmus, for example, separates iOS metrics from others, providing senders with what it calls “reliable” data. This helps in the short term for marketers dependent on open rates.

However, the longer-term effect is likely to wean marketers from instant email feedback and focus, instead, on engagement metrics such as clicks and conversions.  Both are largely unaffected by iOS 15, although the click-to-open rate will be inaccurate. 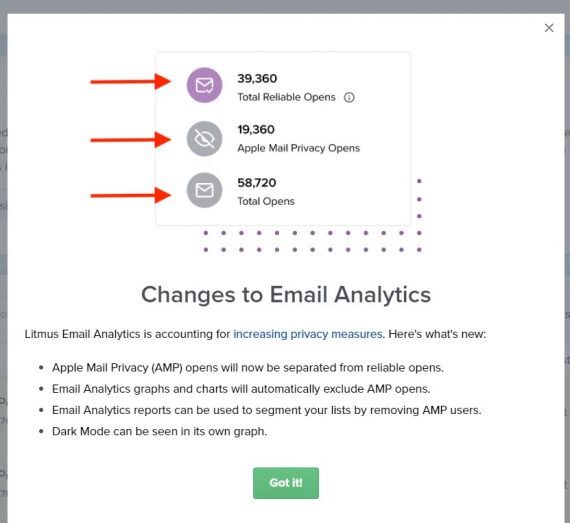