Contextual targeting is not new, although it’s becoming more sophisticated. It is based on a tried and true concept: Place your ad next to relevant content.

Hearken back to decades past, pre-internet, and imagine you are responsible for promoting a brand of golf clubs. You need to figure out how to get your brand’s golf club ads in front of folks who were likely to buy.

How would you do it? You’d probably buy an ad in a magazine, such as Golf Digest, Golf Illustrated, or The Professional Golfer. Your prospects would be likely to read one or all these popular magazines. That’s contextual targeting. 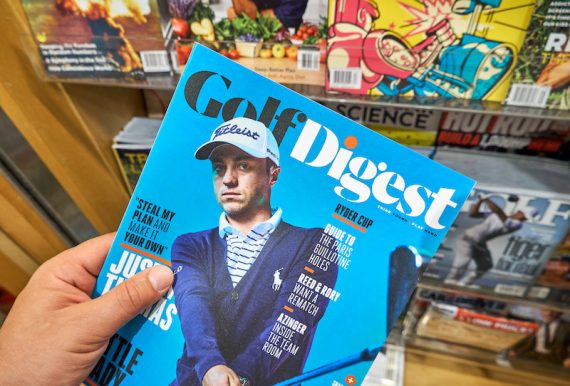 Magazines such as Golf Digest were once a primary method of reaching enthusiasts.

Fast forward to today. You need to promote the new and improved version of those golf clubs. This time, you shoot a few photos, write a snazzy headline, and go to Google Ads, where you target keywords and topics for your Display Network campaign. That’s contextual targeting, too.

So what is the difference between contextual targeting and behavioral targeting?

Contextual targets an article, video, or podcast. And the targeting mechanism is a keyword phrase or entity.

In contrast, behavioral targeting aims at each person’s private behavior, including past searches, social media activity, or even visits to physical stores. It could include the apps someone has installed and used, the purchases someone has made, or the personal preferences and opinions shared with a friend in a private message.

Behavioral targeting has been in the news. Many consumers did not understand the extent to which they were being identified and tracked or how information about them was being stored and shared.

For example, scientist Jaron Lanier argued that social media advertising algorithms were not just targeting human behavior but altering it, in his book, “Ten Arguments for Deleting Your Social Media Accounts Right Now.”

Apple, for example, has already changed its Identifier for Advertisers. It now restricts third-party cookies in its Safari browser (as have most browser makers) and limits tracking in its email app.

This might be good for privacy. But it’s impacting one of the most successful forms of advertising. Behavioral targeting placed extremely relevant ads in front of consumers most likely to engage.

Many direct-to-consumer brands have built their businesses on Facebook advertising because of its ability to target shopper behavior. Similarly, many shoppers prefer ads relevant to them versus context alone.

The balance between personal privacy and behavioral targeting is tilting toward privacy. For example, in the most recent version of its mobile operating system, Apple began asking users to share trackable information with each app specifically. Before this change, users had to navigate a series of non-descript menus and settings to opt out of tracking.

In May 2021, Flurry Analytics reported that only 15% of iPhone owners had opted-in to tracking. In contrast, performance marketing agency Tinuiti reported that about 70% of iPhone users were being tracked before Apple’s changes.

With relatively less tracking data, behavioral targeting may be more difficult. So some advertisers could choose to include more contextually targeted ads and platforms in their marketing mix. This, in turn, might lead to some contextual targeting innovations or changes.

What BeOp CEO Louis Prunel calls “conversational ads” could be an example of contextual targeting innovation.

“Advertisers get much better results … by having conversations that are placed contextually at the end of an article on premium publishers’ [websites],” Prunel explained, adding that “conversational ads” may get as many as 70% more clicks than standard display ads.

While the BeOp platform gives advertisers creative control, one way of using it is to blend a display ad or video with guided selling to engage in a customer “conversation.”

The idea is to ask prospects a question so intriguing that they interact with the ad and eventually convert.

Prunel said that the combination of keyword-based contextual placement, the position of the ad on the page, and good copywriting make these conversational ads effective for both conversion and branding. Only television has a lower cost per impression, according to Prunel. 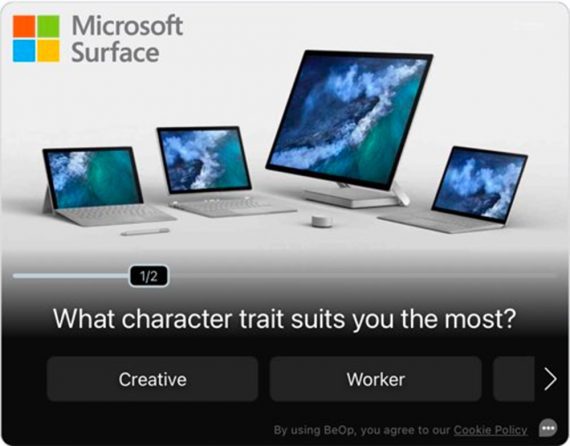 BeOp, an ad platform, uses keywords and topics to place ads in context. Advertisers can use these ads to ask questions and spark a “conversation” with potential customers. Image: BeOp.

Shoppable video is “a video experience with products and information about the products wherein you can take action, and this action is usually a purchase,” said Amit Erental, senior business line manager at Cloudinary, a SaaS platform for streaming video and image management.

“Shoppable video had its start as one of the use cases of interactive video, but over the past three years, we have seen it grow into its own category,” Erental said.

Social networks such as Instagram offer full-fledged shoppable video ads. But given the aforementioned privacy concerns, don’t be surprised if we see shoppable video and contextual targeting combined.

For example, Cloudinary’s offering would allow merchants to create videos, add shoppable links, and place those videos on their own site, a blog, or, potentially, on other sites, such as a cable television channel, shown below.

Ultimately, both behavioral targeting and contextual targeting are approaches advertisers can use to place relevant ads. If one approach wanes in popularity or effectiveness, the other could rise. 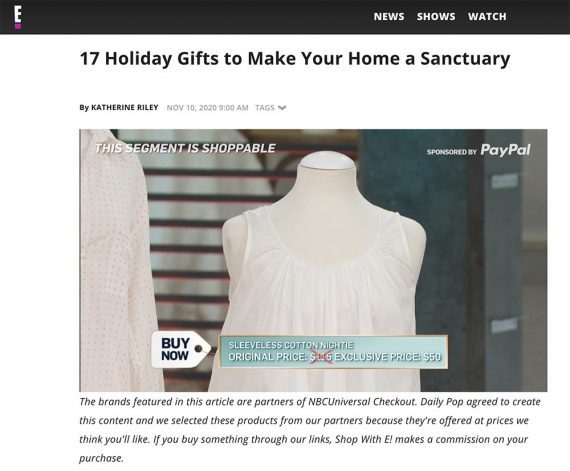 E! Entertainment Television used a shoppable video to show off holiday items in 2020.