According to Twitter, 35 percent of users follow businesses to get discounts and promotions. Not every small business has the funds to engage in a full-scale paid promotional campaign, however. The good news is that Twitter offers a variety of ways that smaller companies can market themselves for free.

In this article, I describe four ways to promote your business on Twitter using these free tactics.

A “Twixclusive“ is an offer that is available exclusively on Twitter. Everyone loves a deal, and when presented as a Twixclusive, your followers feel as if they have an inside track to your promotions. Offering a Twixclusive can lead to more followers, more sales, and more retweets — all while building a loyal fan base.

Here are three ways to leverage Twixclusives to promote your business.

Limited-time Discounts and Special Offers. Give followers a special discount or exclusive offer that is good only for a limited time.

Once you decide on an offer, create a tweet that includes a link to your website, a unique code that your followers can use at checkout (either online or in-store), the specifics of your promotion, and the hashtag #Twixclusive.

Using the hashtag alerts followers and non-followers alike to your offer. Many Twitter users seek out this hashtag to look for deals they cannot get elsewhere.

Videos and Photos. Post videos and photos that give followers a behind-the-scenes look at your business.

Q&A Sessions. Promote exclusive question and answer sessions with a member of your company.

Regardless of which type of Twixclusive you choose, schedule promotions on a routine basis, perhaps as often as weekly. Doing so incentivizes people to follow your business and look forward to the next offer. Using hashtags such as #MondayMadness or #ThriftyThursdays assures your followers that this will be a regular occurrence.

2. Run a ‘Flock to Unlock’ Campaign

Twitter’s Flock to Unlock campaign is a way to incentivize your followers to perform a specific action in order to reveal a special deal. You can choose to disclose the deal in your initial tweet or keep it a secret, revealing it only after a particular criterion has been met, such as a specific number of retweets.

Here are the steps to create a Flock to Unlock campaign using retweets as the example.

If you plan to introduce a new product in the near future, generate interest by posting tweets about it several weeks in advance.

Tweet hints on a regular basis incorporating a hashtag that refers to the product, and that gets people involved.

This type of promotion also works well using a Flock to Unlock campaign. The big reveal could be a video or photo announcing the new product. Link to a page on your website that provides more information.

Also, be attentive to tweets that generate the most interest and then fine-tune your messages to align with them. Repeat what works best and scrap the rest.

Use industry, seasonal, or cultural and sporting events to promote your business.

Industry Events. Kick-start conversations on Twitter about industry trade shows, conferences, or meetings in which you participate. Use a hashtag specific to the event to keep conversations focused, such as in this example.

Seasonal Events. Events such as Mother’s Day, graduation, back to school, and Thanksgiving tend to create spikes in conversation on Twitter. Use hashtags such as #MothersDay to insert your business into the discussion. 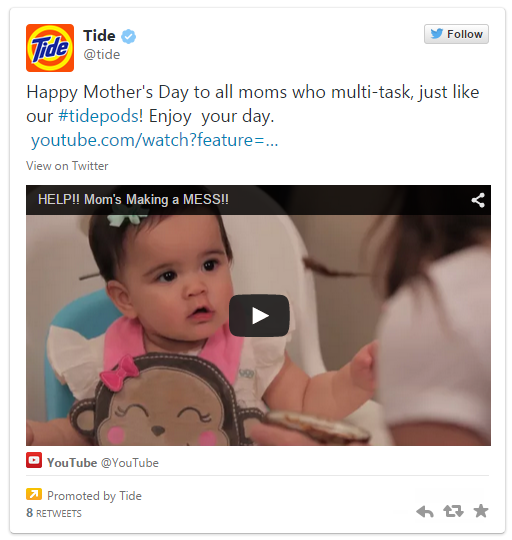 Cultural and Sporting Events. Twitter conversations tend to peak around recurring cultural and sporting events such as the Oscars, the Super Bowl, or the World Series.

Alternatively, focus on local- or state-level events to generate buzz for your company. Here are some examples:

Creating engaging tweets that center around these events is yet another way to gain more followers and breed interest in your business. Consider coupling events with a Twixclusive or Flock to Unlock campaign to amplify the effect.