The so-called “u-shaped” marketing attribution model emphasizes a shopper’s first and last marketing interactions before a conversion. The model can help identify the marketing tactics that are closing sales.

Think of marketing attribution as a process of analyzing a customer’s journey or understanding how a company’s marketing works together to generate sales.

Marketing attribution and the insights it provides identify what’s working and what’s failing. You could then develop new campaigns to improve your results and iterate until your business has a competitive advantage.

The u-shaped attribution model is a common way of analyzing a long, multi-touch buyer’s journey. It can work well for ecommerce businesses selling relatively complex or unfamiliar products. The model is helpful when a shopper interacts with your online store several times before actually making a purchase.

Imagine that you manage marketing for an ecommerce site selling vinyl record and rock-n-roll memorabilia.

A buyer’s journey for your store’s products could have, perhaps, seven touchpoints. The journey could start with a shopper looking for information about the famous CBGB nightclub in New York City and its owner, Hilly Kristal, after watching a movie about both on Amazon Prime.

This shopper first finds your store via an organic search., which led to an article on your store about famous bands that were associated with the club.

Later a separate organic search leads to another blog article on your site, and this time the shopper subscribes to your newsletter. Collectively, an email message, a retargeting display ad, a couple of direct visits, and a well-timed pay-per-click ad lead to a sale.

The customer pays $17,000 for the bass guitar that Tina Weymouth of the Talking Heads played at CBGB in the 1970s.

Collectively these seven touchpoints make up the shopper’s journey from awareness to consideration to a (nice) purchase.

The u-shaped attribution model recognizes the various touchpoints along the buyer’s journey but credits the first interaction and last interaction as the most critical roles.

Thus a typical u-shaped model would award 40 percent of the sale to the first interaction and another 40 percent to the last. The remaining 20 percent would be shared with the second and next-to-last touch or, alternatively, evenly across all of the intermediate touchpoints. 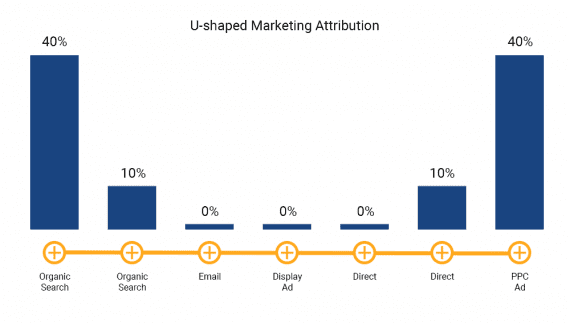 A u-shaped attribution model typically gives 40 percent of the credit for the conversion to each of the first and last interactions. The remaining 20 percent is either divided equally among the remaining touchpoints or, as in this graphic, divided between the second and next-to-last interactions.

In this example, the organic search that first made the shopper aware of your online store would be worth $6,800 (40 percent of a $17,000 gross sale). The pay-per-click ad that sparked the purchase would also be worth $6,800.

Using the u-shaped model to analyze buyers’ journeys, you could see which touchpoints lead to the most profitable conversions and which ones appear most often at the beginning and end of the journey.

We could describe the first interaction in a buyer’s journey (organic search, in our example) as the “exposer” since it introduces or exposes your business to a potential customer. Conversely, the last interaction (the pay-per-click ad) is the “closer.”

Hence, the u-shaped model is different than, say, the source-medium tab on Google Analytics, which attributes conversions only to the last touch. 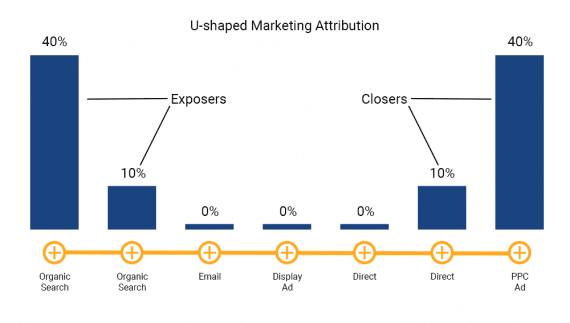 The u-shaped marketing attribution model can identify the exposer and closer in a buyer’s journey.

Importantly, ecommerce marketers should use more than one attribution model.

“The thing about attribution models is that they’re a lens,” said Jason Tatum, lead product manager at CallRail, a marketing analytics platform provider.

“They’re a lens by which [you can] understand what’s driving your business’s growth and conversion rates. …I don’t believe that there is one attribution model to rule them all. I believe that they’re lenses, and it is good to have a different [models] that you trade in and out so that you get a little different view of what’s happening in your customer journey.”