Expanding into international markets presents opportunities and challenges for ecommerce companies. One challenge is to report the return on advertising and revenue in each country and overall. Adding multiple currencies to the mix complicates the effort.

Google Analytics’ conversion of currencies is straightforward. However, setting the conversion date to equal the date of the transaction may not be an option, forcing merchants to convert currencies manually. Google Data Studio’s ability to blend data sources can solve this manual conversion hurdle.

Adding multiple currencies to the mix complicates the effort.

In a post last year, I introduced blending data sources in Data Studio. That example blended SKU costs on a Google Sheet with SKU sales in Google Analytics.

For this currency conversion example, I have created another Google Sheet that lists the U.S. dollar conversion amounts for prominent world currencies. We can then use that conversion data in Data Studio to convert from U.S. dollars to other currencies and vice versa. I’ll assume we’ve advertised on Facebook, and we’re converting that ad spend from dollars to euros.

The first step is to add the data sources in Data Studio. For this example, the sources are the currency-conversion Google Sheet and data from Facebooks Ads.

In Google Data Studio, blend data from Facebook Ads and the Google Sheet, to convert from dollars into euros. Click image to enlarge.

After saving this blend, I’ve included the date of the ad spend and renamed three other metrics.

Include the date of the ad spend (at left) and rename three metrics: “Spend in Dollars,” “Euros/Dollar,” and “Spend in Euros.” Click image to enlarge.

The three name clarifications are:

Rename metrics by clicking to the left. 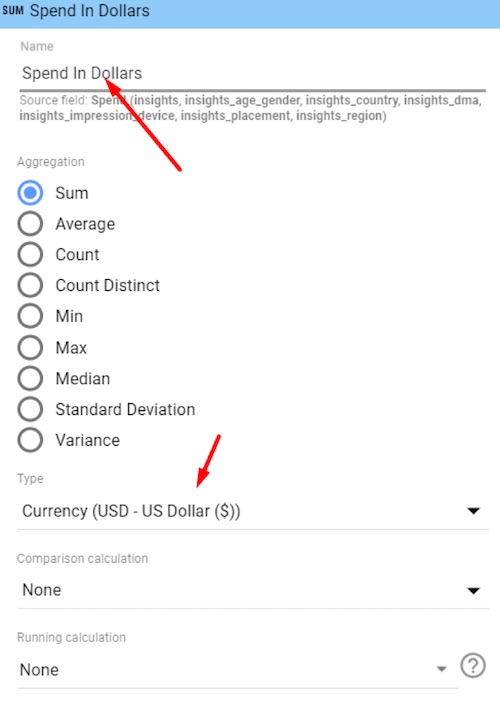 The formula multiplies Spend times the euro conversion factor. I wrap Spend in “sum” as Data Studio requires it. I wrap euro in “avg” in case I include a summary row from the bottom of my table. You could also wrap in “sum” to produce this formula:

Be aware, however, that if you are using a table and include a summary row, the summary value will be off for this column. 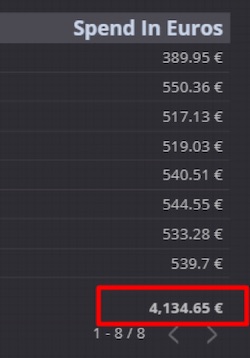 If I had used “sum(Euro),” the individual rows would calculate correctly, but the summary row would be off. 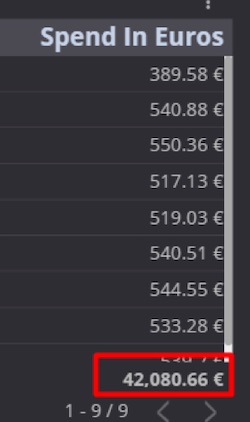 Also, modify the field from a number to currency — euros in this case. 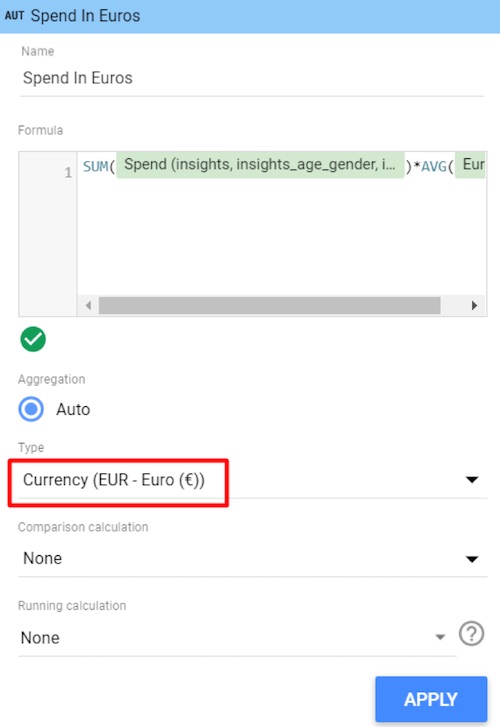 Modify the field from a number to currency — euros in this case.

With the new currency conversion process, we can assemble all sales and advertising spend data into one local currency for performance analysis.