Even before the Covid-19 pandemic, IPOs for many startups with supposedly bright futures crashed when they entered the public market. Some didn’t make it that far, canceling in 2019 their public offerings. A disturbing gap between the private and public valuations of venture-capital-funded start-ups has emerged. This divergence will likely continue as many start-ups are remaining private for longer periods.

Valuations of private companies are speculative. It used to be that start-ups received no more than three rounds of VC funding and were either acquired or became public within five years of commencing business. Now it is not uncommon for start-ups to receive six rounds of funding and stay private for over 10 years.

As a start-up grows into a mature business, both its revenues and expenses rise, exposing it to a different economic environment. More challenges emerge — additional competition, saturated markets, acquiring customers. Venture capital firms, who profit when their startups exit, have shown remarkable patience.

Valuations of private companies are speculative.

Benefits of Being Private

A significant advantage of being private is that a company does not have to disclose financial information. As a start-up’s market matures, more competitors jump in, and every company has to spend more on marketing and customer acquisition. Often this means that the start-up needs more money.

So we are now seeing Series E, F, and G funding rounds. With each round the valuation increases. When the press covers unicorn start-ups (valued at over $1 billion), it focuses on what the start-ups and the VCs disclose — an increase in sales, customers, and valuation. Unfortunately, ballooning marketing costs and lack of profits are not discussed, making for a one-sided and often false picture of a company’s actual circumstances. All the hype ends, however, when the company files to become a public entity.

Fred Wilson, co-founder of Union Square Ventures, a venture capital firm, wrote in his blog, “…valuations in the private markets, particularly the late-stage private markets, can sometimes be irrational. Public market valuations, certainly after a stock has traded for a material amount of time and lockups have come off, are much more rational.”

A start-up’s valuation is whatever participating investors think the entity is worth. When it is founded, a start-up is looking for seed or angel investments. Without revenue, investors often apply a scorecard to value it. Factors include:

If they think the start-up has a strong team and other competitive advantages, the angel investors will assign a higher, subjective valuation.

VCs often use a cash-flow model to assign a start-up’s value. Discounting projected cash flow to the present acknowledges the time value of money and determines the VC’s percentage of ownership. There are pre- and post-money valuations — the latter coming after the angel investments. Those initial investors seek a maximum valuation and thus tolerate and encourage hype.

Relying on the participants that stand to earn profits from a large valuation is an inherent flaw in the start-up system.

VCs value start-ups in technology fields much more than other industries. Hence many start-ups have been calling themselves technology providers no matter how tenuous the relationship. Uber and Lyft, which provide taxi-like services, call themselves technology companies because customers use an app to summon rides. Both are losing significant amounts of money and have not shown a path to profitability.

VCs value start-ups in technology fields much more than other industries. 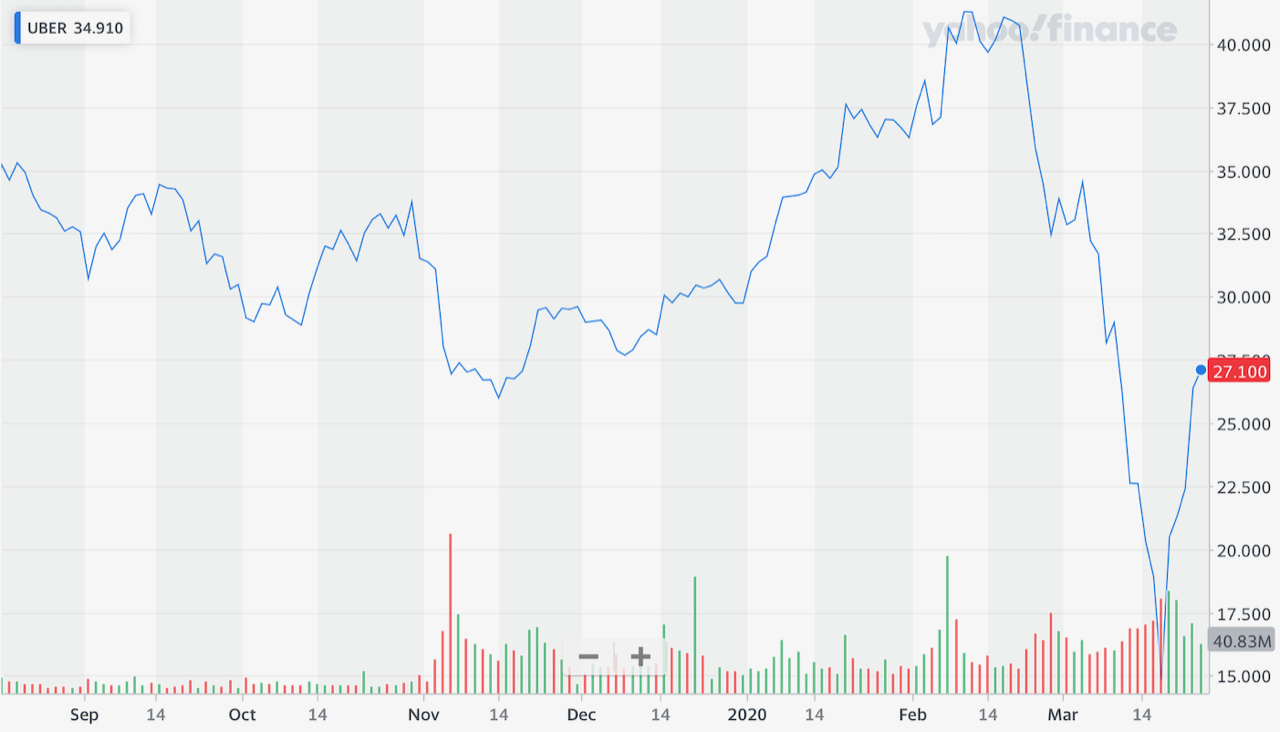 Uber went public in May 2019 at $45 per share. Its stock price has declined since then. Image: Yahoo Finance.

Casper, the mattress-in-a-box company whose IPO I covered earlier this year, also claimed to be a technology provider. It called itself a “pioneer of the sleep economy.” Casper went public at $12 a share, below the $17 expected price. Analysts recommended that nobody buy the stock. On March 24 it closed at $3.77 a share with a market cap of $149.6 million, only 13.6 percent of its private valuation.

WeWork, a “real estate as a service” company, also characterized itself as a technology company. It said it was “changing the world” by renting co-working space. Investors gave WeWork a $47 billion valuation even though public companies with the same business model traded at much lower sales multiples.

IWG Plc, a competing flexible office space provider, had a market cap of $2.9 billion, about one-tenth WeWork’s valuation, despite having 3,000 locations compared to WeWork’s 550.

In August 2019, WeWork filed its S-1 (IPO registration) with the U.S. Securities and Exchange Commission. Finally, its financial statements were available to the public. It turned out that WeWork was losing a lot of money. In 2018 the company lost $1.9 billion on $1.8 billion in revenue. The financial press pounced. The Wall Street Journal, which in 2017 published an article entitled “WeWork: A $20 Billion Start-up Fueled by Silicon Valley Pixie Dust,” wrote on the day of the filing that the company might have to reduce its valuation to attract interest. Rett Wallace, CEO of analyst firm Triton Research, called the filing a “masterpiece of obfuscation.”

Thirty-three days after it was filed, the offering was canceled. WeWork’s valuation declined by 70 percent, and Adam Neumann, its CEO, was fired. The bankers who priced and managed the IPO, JPMorgan Chase and Goldman Sachs, along with initial investors, were surprised. They had anticipated a market cap ranging from $63 billion to $96 billion.

Japanese tech company SoftBank, WeWork’s primary investor, decided to bail out the company by buying $3 billion in additional stock. Earlier this month, SoftBank advised WeWork that it might withdraw from the agreement in the wake of government inquiries into WeWork.

VCs are now imposing tougher terms for late-stage funding and securing protections of their original investments in unicorns. However, many VCs are not tamping down the hype. Instead, they wait to see the proceeds from upcoming public offerings.

The effect of the coronavirus on private companies will likely be limited because it is the amount invested that determines the value. Thus VC-funded ecommerce merchants will probably not see much of a bump for the same reason, even if their revenues increase.

For public companies, the situation is different. Ecommerce merchants that sell consumer goods, groceries, and health products are seeing an increase in revenues and a bump in stock value. Public video-conferencing companies have seen major increases in their share prices. Zoom Video Communications, which went public in April 2019, saw its share price rise from $76.30 on January 31, before the pandemic to $138.11 on March 25. The Zoom app became the most downloaded mobile app for iPhones last week. Its free version is easy to use, and its subscription version has become the most popular video-conferencing tool for remote workers.