The coronavirus pandemic has forced some brick-and-mortar businesses to focus on ecommerce, but this shift in focus is not likely to stop many permanent closures.

“If this isn’t the retail apocalypse, I don’t know what would be,” said Sarah Wyeth, the lead analyst for retail and restaurants at S&P Global Ratings, according to a Wall Street Journal article on May 14, 2020.

Wyeth has estimated that 19 large retail businesses are a coin toss away from going out of business because of mandatory shutdowns and Covid-19’s overall economic impact.

What’s more, some 100,000 retail stores could close in the next five years, according to The Wall Street Journal, as a result of consumer interest in ecommerce and the pandemic-induced recession.

One could say that there is a parallel between the virus and its economic impact: Patients and businesses that are already in poor health are much more likely to die from the infection.

As brick-and-mortar chains, shops, and boutiques work to survive (or, in some cases, thrive) post-coronavirus, they could be focusing on ecommerce and its close cousin click-and-collect commerce or, as it is sometimes called, buy-online-pick-up-in-store. 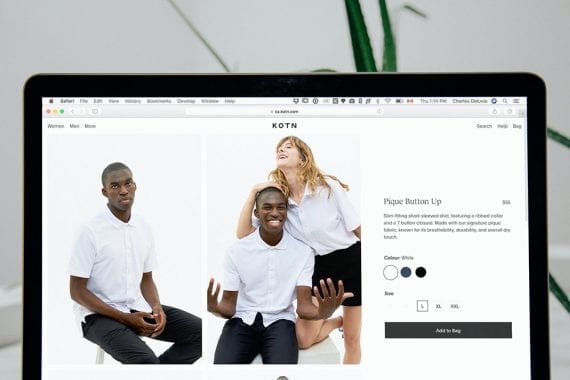 The coronavirus pandemic and its associated store closures have driven some brick-and-mortar businesses to refocus their attention on ecommerce. Photo: Charles Deluvio.

When asked whether he believed some brick-and-mortar businesses that had not had a strong ecommerce presence before the Covid-19 pandemic were more likely to invest more in online selling, eCommerceFuel founder Andrew Youderian, responded, “Absolutely, 100 percent.”

“I chatted with a number of local retail sellers this past few weeks who are scrambling to pivot to online as best they can. This will be great for SaaS companies and those helping sellers operate as well as for customers who will have more boutique options online. If a meaningful number of these merchants pivot online successfully, it could also make for a more competitive marketplace, especially in the short term,” Youderian said.

“We’re seeing a combination of brick-and-mortars just starting to explore ecommerce and retailers that already had an ecommerce presence shifting resources for this to become their main source of revenue,” Rodriguez said.

“In most cases, we’re seeing the need to quickly serve their existing client bases more than investing in online marketing to capture new customers, so it would be hard for these ‘newer’ businesses to catch up with more seasoned ecommerce retailers.”

A key question is whether heightened interest in ecommerce, particularly if it comes from established brick-and-mortar merchants, will pose a significant competitive threat to existing ecommerce sellers.

There are several possible scenarios.

Room for all. Ecommerce could thrive in the “new normal” after the pandemic, making room for all — or at least many — merchants to sell online.

This is the best-case scenario. But it might also be the least likely. BigCommerce, for example, reported on May 12, 2020, that “pandemic panic-buying is leveling out, and people are starting to return to more of their normal spending habits.”

Gross merchandise volume on the BigCommerce ecommerce platform had, as of May 12, risen just one percent from the prior week. Earlier in the pandemic shutdown, BigCommerce merchants experienced significant week-over-week GMV increases in transactions. And some industry segments saw triple-digit year-over-year increases.

“While some [brick-and-mortar SMBs] will undoubtedly use this as a springboard to online success, I would guess the majority of them don’t end up with a meaningful online presence long-term,” said eCommerceFuel’s Youderian.

“Success online takes a lot of intentional time, effort, and study and is a very different business from [physical] retail. I would guess many smaller merchants will return to focusing on the retail side once they open back up to the public, although there will undoubtedly be a small halo effect from merchants who now will be doing both.”

If this were the case, small pure-play ecommerce sellers, especially established ones, would probably not feel much of an impact from new competitors. Those pure-play businesses would still need to deal with the coronavirus’s impact on the economy and their business — but not with inexperienced competitors.

Asked if smaller brick-and-mortar retailers who had not paid much attention to ecommerce before the outbreak posed a possible threat to smaller, pure-play ecommerce business, 3dcart’s Rodriguez said, “It’ll definitively have an impact since one of the new requirements is the ability to provide in-store pickup within the ecommerce website, and for shoppers preferring this delivery method over traditional shipping the new brick-and-mortar-ecommerce-hybrid model would win over stores offering ecommerce-only.”

Will a heightened interest in ecommerce pose a significant competitive threat to the smaller ecommerce sellers? Maybe. It could be a version of one of the three scenarios above. Or it could be that none of these come to fruition.