The deal of the day group coupon-buying concept has taken the Internet by storm. Forbes magazine called Groupon, the leading deal-of-the-day site, the “fastest growing company ever.”

The concept appeals mostly to local brick-and-mortar retailers and large retail brands. But ecommerce merchants can take advantage of the trend, as well, by offering coupons on the deal-of-the day sites as a method to attract new customers. This article provides some examples of ways online retailers can go about it and options to consider.

OfficeArrow is a membership-based, business-to-business online marketplace. It offers deal-of-the-day coupon buying, where daily deals are featured on OfficeArrow’s home page. When users click the “Buy Now” button they are taken to a shopping cart, where the coupons can be purchased. 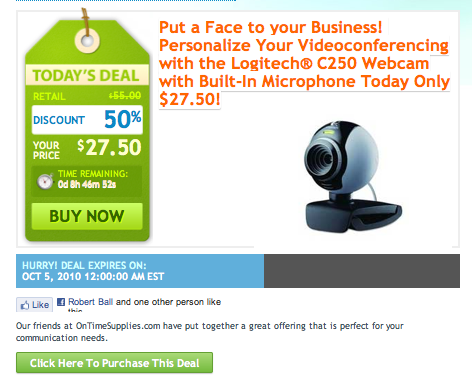 OfficeArrow deal of the day.

“The coupon can only be redeemed by visiting the merchant’s website,” said Robert Ball, CEO of OfficeArrow. “The merchant will register the customer and begin to build a relationship with them. Hopefully, the merchant can sell them other items while the customer is there. The deal of the day is a way to get new business and reduce customer acquisition costs.”

Ball does not advise merchants to set up a deal of the day on their own sites. “The merchant is modifying the behavior of their customers, setting them up to wait for the deal. By using a third-party marketplace such as OfficeArrow, the merchant does not run the risk of harming onsite pricing,” he said.

Ecommerce software providers are beginning to add a daily deal component to their platforms. For example, ShopIgniter, a social commerce provider, will soon launch its “Social Promotions Engine,” which will enable merchants to manage a variety of social promotions. Merchants will be able to set up private sales, time-based sales like deals of the day, and coupon promotions.

“We believe that any company should be able to leverage these social tactics that ‘activate the network’ and drive transactions, something a Facebook store alone does not do,” said ShopIgniter CEO Matt Compton. 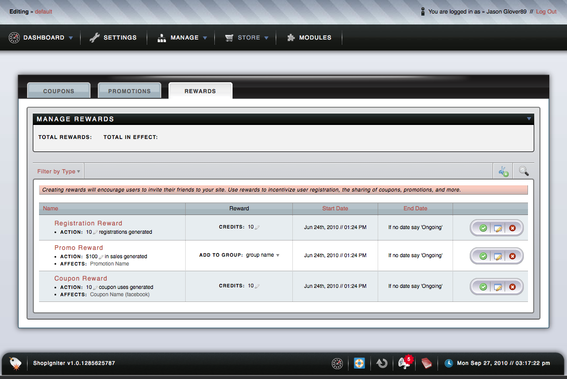 Wildfire, a provider of apps for Facebook fan pages, has just released a group coupon buying app called Group Deals that enables merchants to run daily deals on Facebook or on their own websites via Facebook Connect. Deals are heavily discounted and dependent on having a certain number of users commit to making a purchase. 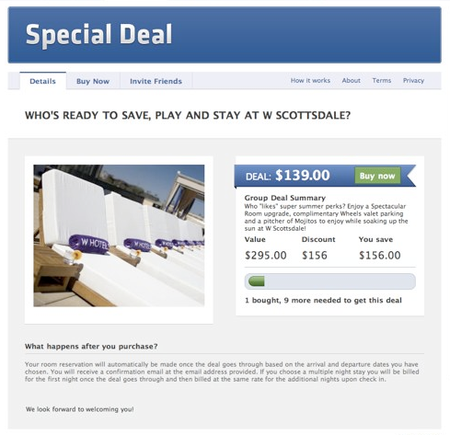 “Merchants are limited only by their creativity in how they can use the app,” said Maya Grinberg, community manager at Wildfire. “They have the option to upload a set of unique coupon codes, which buyers can redeem at the merchant’s site, or simply fulfill the orders based on the information provided by the purchaser on the fan page.” Merchants also have the option to limit the number of deals offered.

The app offers a number of benefits. Merchants can input unique discount codes compatible with their shopping carts, define the maximum number of deals they wish to release, upload custom designs for the deal, create a custom entry form, send notifications to participants and download participant data.

Addoway specializes in using the power of friend-to-friend connections to influence purchase decisions. It offers a milder version of the deal of the day, where deals are handpicked by the seller’s staff, then placed on the site’s home page.

“We allow coupons to be accepted that sellers create and also they can choose to offer discounts for people who like their product or fan page,” said Addoway CEO Fredrick Njim. “In the future users will be able to have Groupon-like deals in their stores and be able to market them.”

The company will soon release coupon functionality for merchants, so they can run limited-time promotions or give discounts to special groups of people with a coupon code.

Here are some suggestions for small businesses that are considering using a deal of the day coupon approach to attract new customers.

Used wisely, deal of the day coupons, as a group purchase option or not, can be a way for ecommerce merchants to gain new customers, while lowering acquisition costs. They key to profitability is in getting customers to return. A carefully crafted follow-up strategy is necessary to ensure success.