A good ecommerce product video can help online shoppers learn more about a particular item, make an emotional connection to some products, and, ultimately, make a good buying decision.

The premise for this success is relatively simple. Videos can convey more and better product information than text alone. In fact, ReelSEO, an online publication for video marketing, reported that nearly three quarters of online shoppers believe that video content had influenced a buying decision. Given the potential impact, it can make a lot of sense to try to optimize ecommerce video to boost sales.

Back in August 2014, I described three tips for making ecommerce videos more effective.

In this article, you’ll find three more tips or suggestions for making the most out of your product videos. These more recent tips are based on a report from Google, which was largely aimed at video advertising but may offer insights about how to get even better results with videos placed on an online store’s product detail pages.

1. Use a Large Video Player

The Google report, “Are Your Video Ads Making an Impression?,” looked at an approved Interactive Advertising Bureau advertising measurement called a “viewable video impression.” This measurement considers a video ad to be viewable when half of its pixels are visible on the screen for at least two consecutive seconds.

Google wanted to understand what made a video ad more viewable, using this definition. For an ecommerce product video, one would hope that customers would be looking at more than half of the available pixels for a mere two seconds. Nonetheless, the things that make an online video ad viewable might also apply to videos more generally.

For example, Google found that, in general, folks were more likely to watch video ads that played on relatively larger video players. 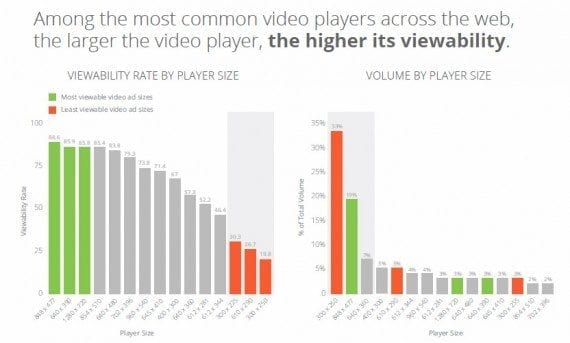 Video player size may impact viewability, according to Google’s findings.

For video ads, this data is telling, especially since Google drew its data from a sample of video ads shown on a variety of sites and devices.

Assuming that there are at least some similarities between what makes an online video ad viewable and what encourages online shoppers to watch an ecommerce video, consider giving product videos more on-page space. 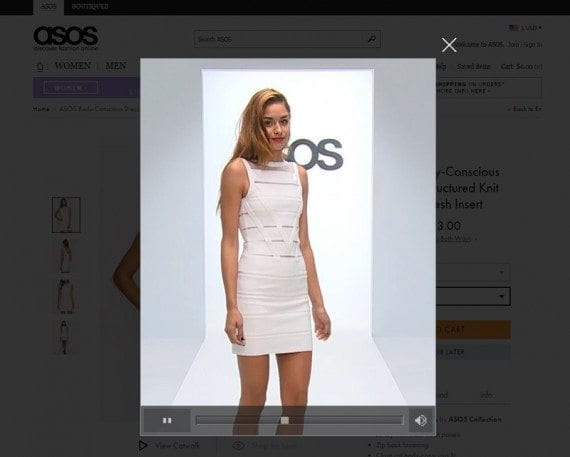 ASOS uses a large video player to show off products.

Online fashion store ASOS uses this approach. Many of the store’s product detail pages include a “View Catwalk” link that opens a relatively large video player.

2. Place Your Video Front and Center

Google also found that video player placement impacted video ad viewability. Videos placed at the center of the screen and within 250 pixels of the top of the page enjoyed the highest video viewability rates. 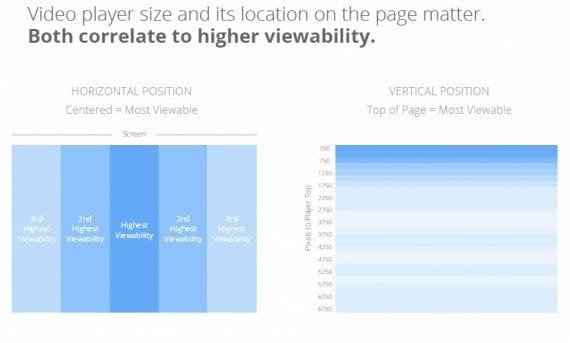 Where a video player is positioned on a page may impact a video’s viewability, according to the Google report.

Again, assuming that the principles that make a video ad viewable are similar to what makes an ecommerce product video get attention, it might make sense to place video players in a prime position on product detail pages.

For online sellers, one good way to manage video position may be to share space with the main product image. 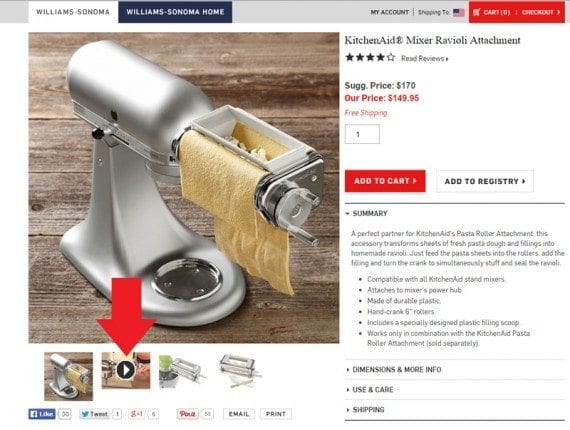 Williams-Sonoma places a video link just below the main product image; when clicked the link opens the video in place of the main image.

Online kitchen supply retailer Williams-Sonoma includes its ecommerce product videos as a link just below the main product image. When a shopper clicks on the link, the video replaces the main image. While this is probably not as effective as having the video player loaded (full-size in the middle of the page), it does put the video link in a high visibility area and conform to product detail page conventions. 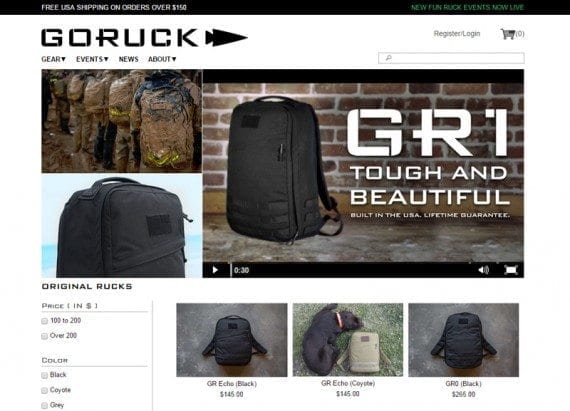 Another example comes from online gear retailer Goruck. The company places product videos at the top of some product category pages and very near the middle of some product detail pages.

3. Have Faith, Make It Obvious, and Test

To a certain extent, the Google findings are not earth shattering. Rather they point toward making video obvious on your site. But these suggestions do require a certain amount of faith.

Before an ecommerce marketer places large product video player in the middle of important pages, that marketer needs to believe that product videos will, in fact, boost sales.

While there are several anecdotal reports and case studies that show videos can increase ecommerce conversions, the estimated impact can vary greatly, with some saying video produces amazing 40-percent increase in sales and others reporting more modest 4-percent increase.

So my final tip really has three parts: have faith, add obvious video content to your site, but measure the results. Consider using an A/B testing format to decide if ecommerce product videos make sense for your site. And don’t skimp on the testing, measuring things like video player size, player position, and video content.