I’ve received many holiday email-marketing messages since the busy Black Friday to Cyber Monday weekend. In this post, I’ll share five that are especially clever.

I was looking in November for a pair of slippers I had seen in a store in Ireland. A quick Google search revealed the store and the slippers, which I purchased on the store’s website as a first-time customer. Fast forward a few weeks and was surprised to receive a $20-off coupon in my physical mail from the site owner.

I retained the coupon for a few days. Ultimately, I did not have an immediate need, and reluctantly tossed it in the recycle bin. A few days later I received a reminder email. 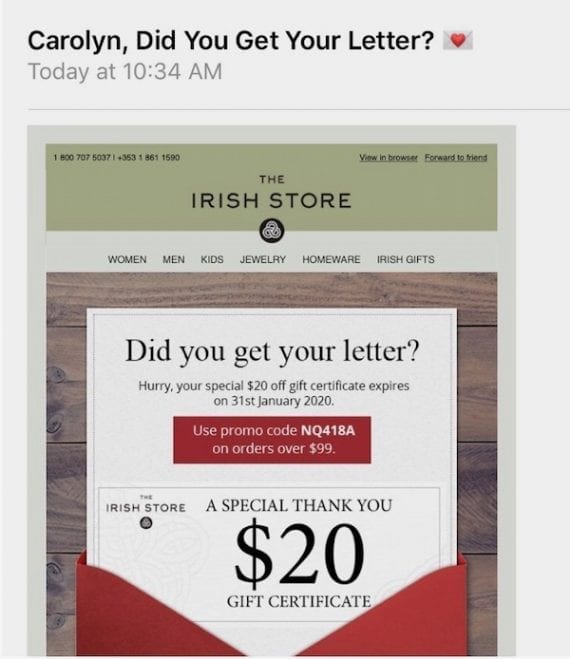 This email from The Irish Store arrived after the author received a physical letter via the U.S. Mail.

Had The Irish Store simply sent me a $20-off coupon via email, I may have quickly skimmed it and moved on. But since I received the physical mail piece and now the email, I recognized the offer and was excited to have an electronic form that I could use when I needed it.

Using direct physical mail to reinforce email (and vice-versa) is an excellent way to boost response rates. I’ve tested this tactic with a few retailers. The results are a consistent revenue lift of at least 20 percent from shoppers who receive both an email and direct mail piece versus those that receive only one or the other.

Some points to consider:

One of the most effective tactics to boost conversion rates during the holiday season is to reinforce shipping deadlines by reminding shoppers how many days are left to shop. 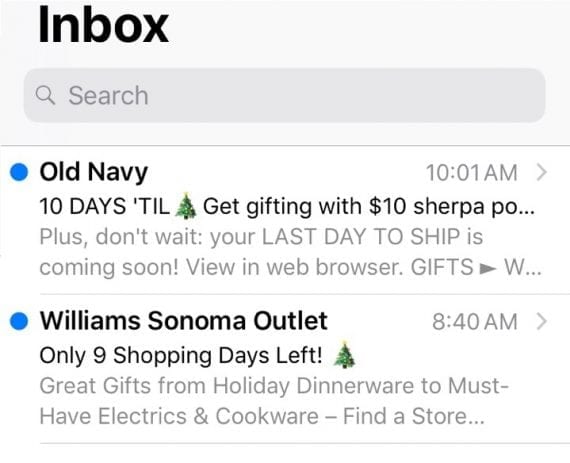 These subject lines and preheaters from Old Navy and Williams & Sonoma can entice procrastinating shoppers.

The body of the Old Navy email includes a countdown clock that tells readers how much time remains to get free shipping before Christmas.

Timely triggered emails can have the highest conversion rates. Abandoned browse emails can capture shoppers who, for whatever reason, did not place items into their cart. Send the first abandoned browse email soon after the session. Then send a few later, in a series. The emails should include products that were browsed as well as suggested items based on the viewed items.

The examples below are two abandoned browse emails I received from Wayfair. The first featured the product I was viewing, a “Mini Pine Bouquet… .” The second email contained other product suggestions. In tandem, the two emails are an effective way to entice shoppers back to the site. 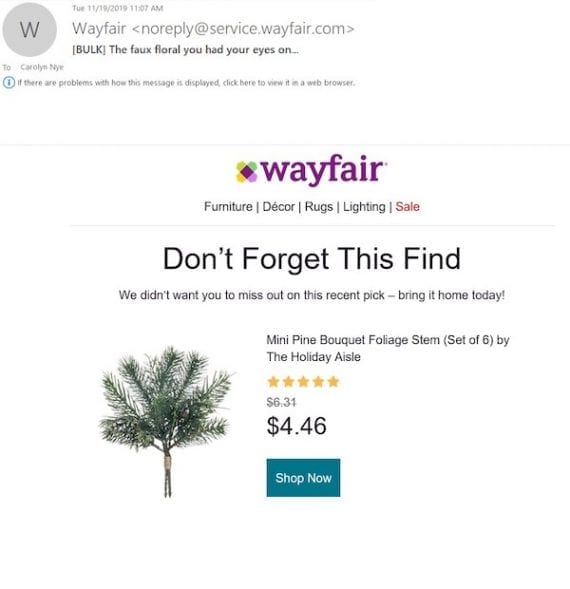 This initial browse-recovery email from Wayfair featured a product that the author had viewed. 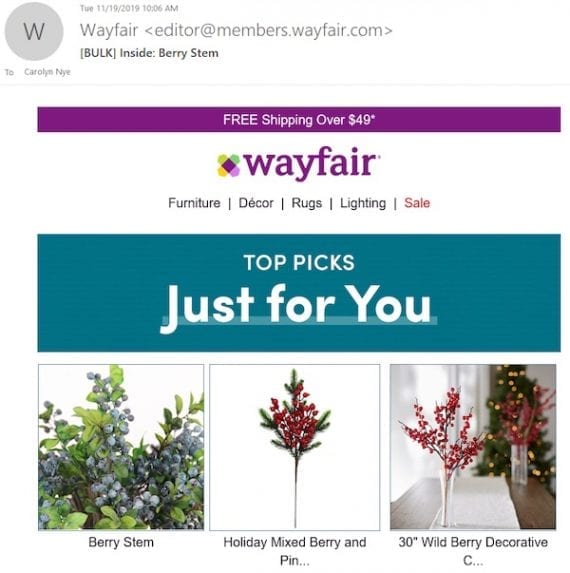 Adding the recipient’s first name to the subject line can attract attention and increase open rates. With any personalization and dynamic content, however, there’s a risk of error if the database is incorrect. That’s what happened with the initial email from The Irish Store. My first name was incorrect. It listed “Fiona” instead of “Carolyn.”

The Irish Store quickly issued an “Oops” correction on the subject line in the subsequent email. It grabbed my attention. The combination of personalization and a correction was effective — regardless of whether it was intentional. 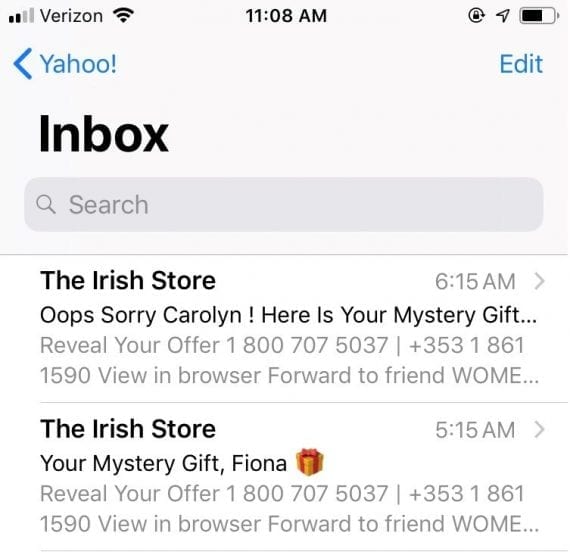 The first email from The Irish Stores misstated the author’s name — “Fiona” instead of “Carolyn.” The second email — “Oops Sorry Carolyn” — was a correction, planned or not.

For holiday email marketing, it’s all about standing out in the inbox. To do that, some retailers use emojis in subject lines and preheaders. One tactic I have seen this season is the heavy use of repeating symbols, including some surprising ones. For example, in the subject line below, Wayfair used several large red “X” emojis in a row. It caught my attention.