Consumers Use Tablets for Shopping; 70 Million Units in 2011

When Apple introduced the iPad in April 2010, people ridiculed the name. Nobody is mocking it anymore. While other companies, including Microsoft, tinkered with tablets earlier, none of them made much of an impression on consumers. With its sleek design backed by Apple’s marketing magic, the iPad made an instant impression — 14 million iPads were sold in 2010. Samsung, Apple’s closest tablet competitor, sold 2 million units in 2010.

IDC, the market intelligence firm, estimates that 62.5 million tablets will be sold in 2011, an annual increase of 290 percent. Gartner, another IT analysis company, is even more optimistic, predicting 70 million tablet sales in 2011. Of this total, Apple could garner 40 million sales if it can keep up with demand. 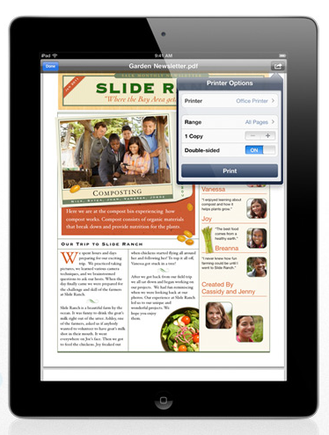 At the end of 2010, 30 tablet brands were on the market. Currently, 102 tablets are either for sale or in development by 64 manufacturers. Some companies have already exited the market, most notably HP, which pulled its TouchPad recently. Gartner estimates that 294 million tablets will be sold globally in 2015. Apple is expected to maintain over 50 percent of the tablet market until that time.

Tablets are a game changer. Across the United States, school districts are abandoning textbooks in favor of tablets with digitized text. Apple officials say that more than 600 districts have issued iPads to students in lieu of books. Doctors’ offices are using them instead of paper forms for patient registration. One software company has received certification for an electronic health record tablet application. Research in Motion’s BlackBerry PlayBook became the first tablet to receive approval for use in U.S. government agencies. As a cost savings measure, the Dutch government is now distributing meeting documents to its senators digitally on iPads.

Unlike other devices that started either in the corporate or consumer market and slowly migrated to the other, the tablet became instantly popular in both markets at the same time. Tablet ownership will likely grow rapidly in the U.S. — at a compound annual growth rate of over 51 percent from 2010 to 2015.

Android, Google’s mobile operating platform, has not gained the same traction in tablets that it has in smartphones. One reason is that while Apple has the same operating system for phones and tablets, Android tablets run on Honeycomb, a separate Android OS. In October, Google is expected to introduce Ice Cream Sandwich, an OS that will run on both smartphones and tablets. Another issue is that there are 285,000 iPhone applications that can run on the iPad — albeit at a lower resolution — plus 90,000 apps specifically for the iPad, compared with about 230 applications that run on Honeycomb.

The primary tablet operating systems are as follows.

The most formidable challenge to Apple, however, is expected to come from Amazon, which will reportedly launch its Kindle tablet in November. The 7-inch Android-powered device is expected to cost $250, considerably less than the $499 iPad.

Consumers are spending more time using browsers on their tablets than they are using applications, according to Forrester Research. Browsers are more popular because they provide more reliable content delivery and the content can be more easily shared. The majority of a content owner’s traffic comes from referral traffic such as search, share, and email; referral traffic is lost with applications.

“The website is a perfectly good delivery mechanism for the content and takes better advantage of the medium,” says Khoi Vinh, former design director for The New York Times website. “These apps tend to set aside those benefits that users have already said that they want for this illusory benefit of being able to control the typography and the layout and being able to make things look more print-like.”

Smaller ecommerce vendors should probably redesign their websites to be tablet friendly. Major large online vendors are already doing it. Ahead of the launch of its Kindle tablet, Amazon has been testing its website optimized for tablets. The new design is being rolled out gradually across the country and features a larger search bar and fewer buttons.

Consumers Use Tablets for Shopping

A survey conducted by Google — available here as a PDF — reported that 43 percent of respondents spent more time with their tablets than their desktop computers. Shopping via tablets has become so popular that a new term has been coined — “t-commerce.” Forrester Research found that among online shoppers who have tablets and smartphones, most prefer tablets to smartphones when making online purchases. Specifically, 72 percent of Gen Xers (roughly 30s and 40s), 67 percent of boomers (50s and older), and 65 percent of Gen Yers (20s) say they use their tablet more than their smartphone to shop online.

Ecommerce solution provider Shopatron conducted a survey of 800 retailers last spring and found that the average iPad conversion rate was seven times higher than that of smartphone devices. The survey showed that iPad owners:

Although tablet screen resolution is the same as that of the desktop, the user experience can be different because on the desktop uses mouse clicks and keyboards, while tablets use finger swipes and on-screen keyboards. According to Alex Schmelkin, president of Alexander Interactive advertising agency, even if tablet screen resolutions match that of desktops, the screen size does not. If a site is desktop optimized only, content will appear smaller and almost unreadable on tablets 10.1 inches or smaller. Also shoppers may wish to switch to portrait or landscape modes on a tablet, something not available on a desktop.

If you have just designed a mobile friendly website and think that is sufficient, consider this advice from Schmelkin. “A mobile friendly version often means a simplified, text-oriented site while a tablet friendly version can be more complex in layouts and graphically as rich as the desktop version…. A troubling early development in t-commerce had a number of retailers redirecting tablet users to their mobile-optimized sites. This was a mistake, and is largely being replaced with retailers deploying tablet-optimized experiences.”

Tablets are having a profound effect on how we view, manage, and use content. To stay competitive, small ecommerce merchants should be ready to accommodate the t-commerce boom.