One way to elevate some of the pressure to write is to get help from Hemingway. No, not the famous American journalist and author. Rather from the Hemingway Editor that — in some ways — emulates his style and helps you write clear, economical prose. 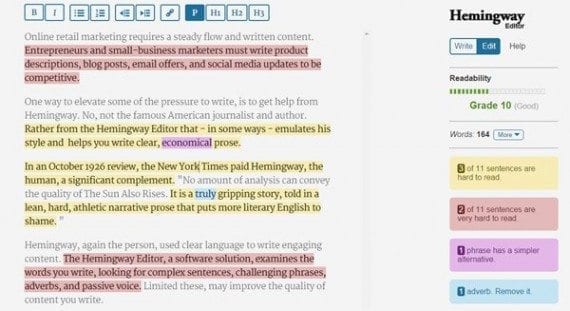 The Hemingway Editor proofreads your writing, looking for opportunities to make it more clear.

In an October 1926 review, The New York Times paid Hemingway, the human, a significant compliment. “No amount of analysis can convey the quality of The Sun Also Rises. It is a truly gripping story, told in a lean, hard, athletic narrative prose that puts more literary English to shame.” 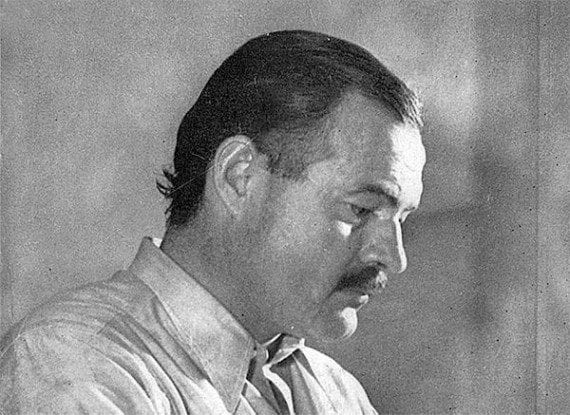 Hemingway used clear language to write engaging content. The Hemingway Editor examines the words you write, looking for complex sentences, challenging phrases, adverbs, and passive voice. Limiting these may improve the quality of content you write, and, in turn, help improve the results of your content marketing.

Use Complicated Sentence Structures with Care

In English grammar, there are specific terms to describe sentence structure.

The aim is not to eliminate compound or complex sentences, but rather to limit them. As an example, consider a few of the opening lines from Hemingway’s The Sun Also Rises.

The Hemingway Editor highlights areas of your copy for possible rewrite. The aim is not to rewrite everything, but rather to make good choices.

The first sentence is simple in structure. It has one subject, “Robert Cohn,” and one predicate, “was.”

Robert Cohn was once middleweight boxing champion of Princeton.

The next sentence has two subjects, “I” and “it,” and two predicates, “am impressed” and “meant.”

Do not think that I am very much impressed by that as a boxing title, but it meant a lot to Cohn.

The final sentence in this section has several subjects, predicates, and clauses. It is a compound complex sentence.

He cared nothing for boxing, in fact he disliked it, but he learned it painfully and thoroughly to counteract the feeling of inferiority and shyness he had felt on being treated as a Jew at Princeton.

The Hemingway Editor gives its namesake a score of 10 for the passage, but did note how hard the last sentence might be to read.

In general, limit the use of comparatively complex sentences. Think of them like spice added to a gourmet meal. If you have no spice, dinner might be bland. Too much spice, and lots of folks won’t want it.

Consider the Words and Phrases You Choose

The Hemingway editor highlights words in purple when it thinks there are simpler alternatives.

Use the word “economical,” and the Hemingway Editor will recommend “cheap.” Type the word “eliminate,” and it suggests “cut, drop, or end.” Here is a good one: Include the pretentious “utilize,” and it requests the far better “use.”

The point is not to limit your vocabulary, but to be conscious about the words you pick. As an example, consider the above paragraph. It has three sentences. Each sentence sets up a comparison between what you type into the Hemingway Editor and how it responds. These sentences could have been virtually identical.

Hopefully, you think the first version, which used “use,” “type,” and “include” to describe your action and “recommend,” “suggests,” and “requests” for the editor’s response, was better. It used a variety of similar words rather than echoing exactly the same words.

Use Adverbs and Adjectives Properly

E.B. White, an author and grammarian, once said, “write with nouns and verbs, not with adjectives and adverbs. The adjective hasn’t been built that can pull a weak or inaccurate noun out of a tight place.”

The Hemingway Editor thinks less of adverbs than White, whose most famous work is Charlotte’s Web, thinks of adjectives. Every adverb you use is highlighted in blue. Here again, the editor is not really suggesting that you should never use an adverb, but rather to use them only when they add meaning or enhance understanding.

Here is another passage from The Sun Also Rises. It uses five adverbs. Decide if you think they improve readability.

Use adverbs only when the improve the sentence.

With this in mind, the Hemingway Editor highlights passive voice phrases in green, giving you the opportunity to turn the action around. Here, perhaps more than in any other area, you want to eliminate the passive voice. Only use it if the active voice construction is significantly more difficult to read.