Successful online banner ads feature clear and concise creative content that often expresses a single idea about a single product. For online sellers, a well-planned and well-designed banner ad may familiarize customers with a brand or products or even boost immediate sales.

Banner ads are one of the original forms of Internet advertising, dating to 1994 or so. This relatively old form of promotion harkens back to an even more established ad form: Banner advertising is similar to print advertising.

Marketers in the 1990s were comfortable with the idea of placing a passive ad next to content, like a newspaper or magazine article. So it seemed somewhat natural to just place a similar sort of ad next to a website article.

But banner ads have a powerful advantage over an article in a magazine or newspaper. Shoppers can click on a banner and go directly to the advertiser’s website.

This singular ability to send consumers directly and immediately to your store makes banner ads very competitive. Lots of advertisers want to reach out to potential customers. In this competitive environment, advertisers look for ways to stand out, and most recently standing out has taken the form of compelling banner ad creative — i.e., the layout, graphics and copy used.

1. Have a Clear Goal

For some online retailers, an ad’s goal is obvious: sell something. Nonetheless, before you sit down to design a new banner ad, it is a good idea to at least think about what that ad is supposed to achieve.

If sales are your goal, how many sales will be needed to break even? How many orders will the banner ad need to help sell to be “successful.” Does conversion rate matter?

Your goals should inform your banner ad design; so have some. 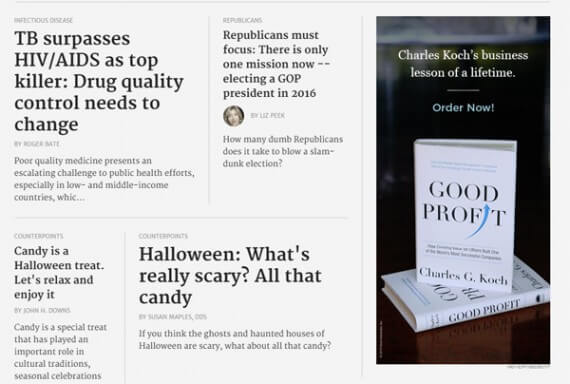 This banner ad — “Good Profit,” on the right — has a clear goal. It wants you to order a book.

“In the second half of 2014,” wrote Bob Arnold, Digital Media & Strategy Lead for Google’s own ad buying team, “the banner creative for our Android Wear campaign increased brand recall and intent by 15.8 percent and 9.4 percent, respectively.” 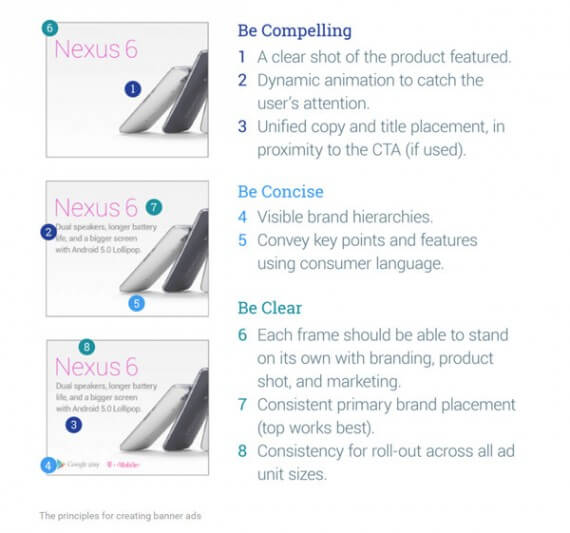 Of these three, “compelling” might be the most difficult. The term is subjective. What is compelling one shopper could repel another. Nonetheless, Arnold recommends using faces, brand colors, and clear text to help. To these add high quality product photos.

The “concise” principle should focus your design on one thing: one product, or one message about one product. “Someone might see a banner ad and only pay attention to it for a moment,” Arnold wrote, “in that moment, be concise to make sure your message sticks.” 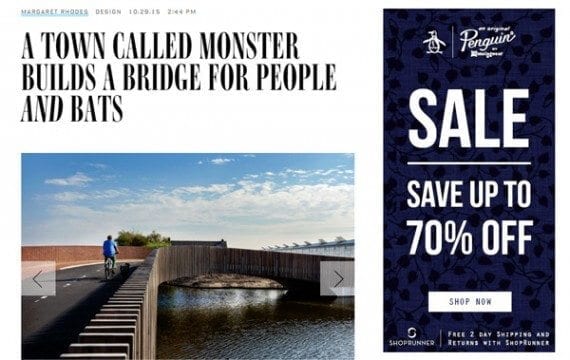 This ad from Penguin, on the right, wants you to save up to 70 percent.

Clarity or being clear has to do both with the message and the graphics. For ecommerce, pictures of the product may be best. Lifestyle images might work in other instances.

Designing banner ads is not the act of making a singular graphic. It is, instead, the creation of many banners in many sizes that will display on many different devices.

Here the best practice is simple enough: try to maintain your messaging and your “look” whilst still designing to meet the size and capabilities of each banner ad position.

In some case, it may even make sense to design dynamic ads that draw from feeds. In this way, it is possible to change the feed content, and thereby change the ad content in response to changes in the market.

Earlier, I mentioned that the term “compelling” could be subjective. In fact, banner ad design in general can be subjective. You might like some ad, but that does not necessarily mean it will be your best performing creative.

To really do the best job you can with banner ads, test your banner ad design. Google’s Arnold suggests creative testing, wherein you keep the same size banners on the same sites targeting the same potential customers, but you change the way that you present that product or offer. You change the banner ad creative.

“Without testing, creative quality turns into a subjective — or even a philosophical — debate. Data can streamline the dialogue. Since creative testing isolates creative quality, it’s possible to extrapolate which tactics work to formulate a set of best practices,” wrote Arnold, who also suggested a testing workflow. 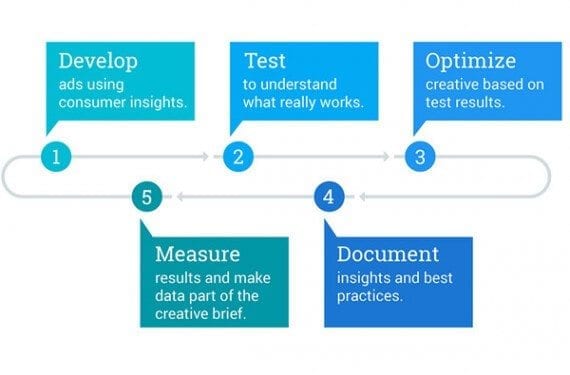 Treat your creative testing like a standard A/B or multivariate test. Run the versions of your ad at the same time and in the same way. Monitor and measure performance indicators related to the goals you set for the campaign. How much are you selling?

Review your test results, optimize your ad, and keep trying until you are consistently getting successful results.