Marketing, the act of communicating value to prospective customers, has changed significantly in the past few years, impacting not just how businesses must promote products or services, but the kind of person who must do the promoting. Failing to keep up with these marketing trends might significantly impact ecommerce sales, growth, or even viability.

The modern ecommerce marketing department is a data-ingesting, tactic-testing, business research and publishing team that doesn’t care in the least about conventional marketing models like the “Four P’s” — product, pricing, place, and promotion — which may have worked great in decades past, but won’t fly in today’s Internet-connected, mobile, and social consumer climate.

Evidence of the Change

In August and September of last year Adobe Systems and ResearchNow surveyed 1,000 marketers in the United States. The study, which had a 95 percent confidence level when projected on the industry as a whole, found that 76 percent of American marketing professionals believed that their profession had changed more in the past 2 years than it had in the prior 50 years.

What’s more, only 40 percent of the marketers surveyed thought their own company’s marketing was effective. So either these folks want to do a bad job, or the industry has changed so much that they are not sure how to market.

This lack of confidence or marketing inability may be in part because things that used to work well no longer do. Consider, as an example, investments in newspaper advertising.

Dr. Mark J. Perry, professor of economics at the University of Michigan and the author of the American Enterprise Institute’s popular Carpe Diem blog, wrote in April 2014, that “the decline in print newspaper advertising to a 63-year low is pretty amazing by itself, but the sharp decline in recent years is stunning. Newspaper print advertising revenues decreased more than 50 percent in just the last five years, from $37.6 billion in 2008 to only $17.3 billion last year, and almost 70 percent over the last decade, from $56.9 billion in 2003. 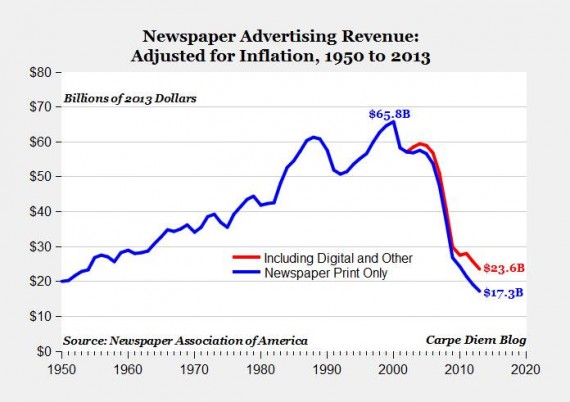 As a final point, I wrote an article in 2009 titled “Four Ways to Measure Print Advertising Effectiveness.” While I still believe the four measurement methods work, that article implied, at least in part, that print advertising could work, and that is mostly not the case anymore.

“I must confess a certain affinity for printed media,” that now-dated article said. “As someone who spends many hours each day working and reading on a computer, I find a sort of nostalgic comfort in flipping through the glossy pages of a magazine or in feeling the inky lightness of newsprint.”

My attitude and outlook has changed. In fact, I read nearly everything on my phone or tablet now, and I have not read a newspaper in print in more than a year.

People interact, learn, communicate, and do just about everything — somewhat — differently in 2014 than they did just a few years ago.

Consider that in 2010, American adults on average spent about 3.7 percent of their media consumption time on a mobile device, which amounted to about 24 minutes a day, according to eMarketer. This year, American adults will spend 23.3 percent of their media consumption time or about two hours and 51 minutes a day on mobile devices, which is more than a 500 percent increase in just four years.

Similarly, in 2010 U.S. adults spent about 29.6 percent of their total media consumption time on digital devices like computers and smartphones. In 2014 that number has risen to 47.1 percent, which is even more time than those same folks spend with television (36.5 percent in 2014).

Together these trends, along with a dozen of other differences like the growth of ecommerce, have fundamentally changed how would-be customers get information and make buying decisions.

As a consequence, how a company markets must also change. In fact, the largest change may be that marketing or at least effective marketing has become somewhat unstable. A marketing strategy or tactic that worked well five years ago or even six months ago, may not work well now at all.

In the digital marketing context, writer and entrepreneur Andrew Chen has what he calls “The Law of Shitty Clickthroughs,” which postulates that “over time. all marketing strategies result in shitty clickthrough rates.”

To keep up, marketers must do a few things.

The Marketer Should Change

If marketing has changed, then the person doing the marketing might also need to change.

Sean Ellis, CEO of Qualaroo (a marketing software company) and Chen, mentioned above, have been somewhat ahead of the curve. Ellis in 2010 and Chen in 2012 began describing the new kind of marketing needed for an increasingly dynamic promotional environment. This person is part growth hacker, part engineer, part creative.

“Growth hackers are a hybrid of marketer and coder, one who looks at the traditional question of ‘How do I get customers for my product?’ and answers with A/B tests, landing pages, viral factor, email deliverability, and Open Graph,” Chen wrote. “On top of this, they layer the discipline of direct marketing, with its emphasis on quantitative measurement, scenario modeling via spreadsheets, and a lot of database queries.

“Growth hackers are engineers leading teams of engineers. The process of integrating and optimizing your product to a big platform requires a blurring of lines between marketing, product, and engineering, so that they work together to make the product market itself. Projects like email deliverability, page-load times, and Facebook sign-in are no longer technical or design decisions — instead they are offensive weapons to win in the market.”

To make the point, Chen used the example of a Craigslist integration that Airbnb had done. The key, Chen noted, was that Craigslist does not have a public API. Nonetheless, Airbnb created a smooth, easy-to-use feature that helped Airbnb grow. The feature, in Chen’s opinion, would have never been added if a traditional marketer had been running things at Airbnb.

Marketing has changed, marketers are changing, and it will be important for ecommerce businesses to adapt if they want to continue to grow and be successful.