Equity crowdfunding is now legal in the U.S. The final bill is more restrictive than the one originally passed in the House, providing more regulation for the process and placating some of the critics of equity crowdfunding.

The SEC has nine months to prepare implementing rules; so, equity crowdfunding will not really take off until 2013. But companies can still work with intermediaries that are registered broker/dealers or have headquarters outside the United States. Around the beginning of July, intermediaries based in the United States that are not broker/dealers can begin accepting crowdfunding requests but can only accept money from “accredited” investors, per existing regulations.

To qualify as an accredited investor, an individual must have a net worth in excess of $1 million, excluding the value of a primary residence, or a minimum annual income of $200,000 ($300,000 for a couple) for each of the past two years, plus a reasonable expectation of the current year’s income at least matching that level. The new rules state that no more than 500 investors in a crowdfunded business may be non=accredited investors.

Even before the bill was signed, new equity crowdfunding websites sprung up, each boasting over 1,000 investors willing to spend. Among them are Crowdfunder, Wefunder, and Rock the Post.

New crowdfunding sites, such as Wefunder, have launched.

One factor that might deter potential investors is the lack of liquidity of investments. There is no mechanism for selling shares. Investors have to wait until the business is sold or goes public.

Should Risky Investments be Limited to the Wealthy?

The laws and regulations that until now constrained investments are over 75 years old, enacted during the Depression as a reaction to the stock market crash. In practice, by the late 1990s, these laws shut out all but institutional investors and the wealthiest individual investors. Nobody else could get in on initial public stock offerings.

The laws purportedly were meant to protect the middle-class and the poor, predicated on the concept that rich people, because they are rich, are smarter than people with less money, while also being better able to absorb losses.

Those with less money are presumably naïve, more likely to fall for investment scams, and should not be allowed to engage in investments with any more risk than a money market account. While investments in entrepreneurial undertakings are indeed risky, when they succeed they can be spectacularly lucrative.

Once the JOBS Act passed, numerous financial analysts, lawyers and bloggers said that despite the tougher rules added by the Senate and included in the final bill, equity crowdfunding will result in the demise of what is left of the middle class. In an outpouring of condescension, they are predicting that those people with less than $1 million in assets are not bright enough to avoid becoming the victims of scam artists emboldened by the new law to offer all types of phony investments. The pundits also object to the crowdfunding intermediaries being exempt from some of the SEC oversight that apply to broker/dealers. But the SEC, remember, is the agency that failed miserably to protect both accredited and unaccredited investors from Bernard Madoff — the convicted investment swindler — despite repeated warnings.

In another interesting twist, there will be no regulation of crowdfunding sites that operate on the donation model, or restrictions on how much people can donate to projects on these sites. The premise is that these sites cater to finite projects, not businesses, and that the projects will get relatively small amounts of money from people who expect no return on investment. Last month, video game producer Double Fine requested $400,000 for a new adventure game. The project raised $3.3 million from over 87,000 backers. It became the largest crowdfunded project ever. The amount of money donated is largely irrational because the company only required $400,000. And remember that equity crowdfunded businesses will only be allowed to raise $1 million per year. 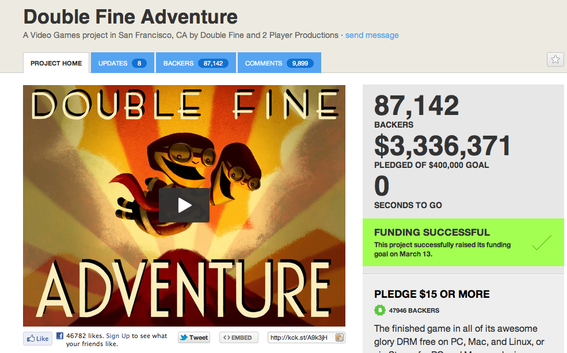 It’s likely that many entrepreneurs and small businesses will take note of the amount of money that can be raised via the donation model and take their project to those websites, avoiding the extra paperwork and limitations of the equity crowdfunding sites. And they will not have to deal with pesky shareholders.