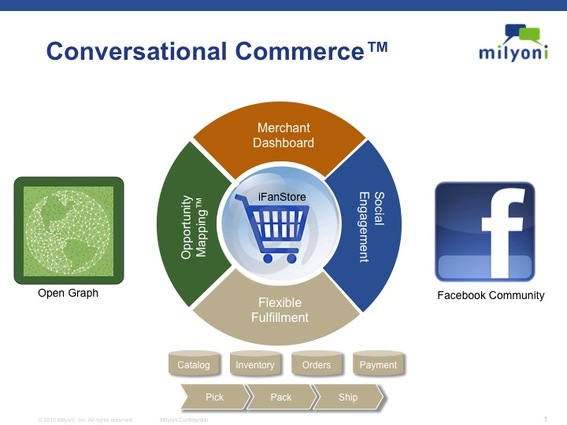 iFanStore is the core component of a larger, six-part platform from Milyoni called Conversational Commerce. Rather than pass users off to another website, it is a shopping cart that operates completely within Facebook. Transactions are processed through PayPal, Authorize.Net, or most any other payment gateway, according to the company.

Aside from the fact it resides inside a Facebook fan page, iFanStore functions just like any other shopping cart. It manages catalog uploads, offers detailed product management, order management, shipping and tax calculations, payment processing and reporting. It also supports digital downloads such as music or video.

The company clearly understands how social media and ecommerce should be intertwined. “It is not about shopping. People don’t go to Facebook to shop. A conversation begins by engaging your fan base and offering up opportunities to purchase contextually relevant items,” said Dean Alms, Milyoni’s vice president of strategy and marketing. “When your favorite NBA basketball team advances in the finals; it’s great to share your jubilation online with other fans and it might be the right time to buy a new hat or t-shirt to celebrate the win.”

That is where Milyoni’s Social Engagement component comes into play. It allows merchants to engage their Fan base and promote products via Wall posts, which fans can then comment on, Like and share.

Here are two examples of ways these posts appear. 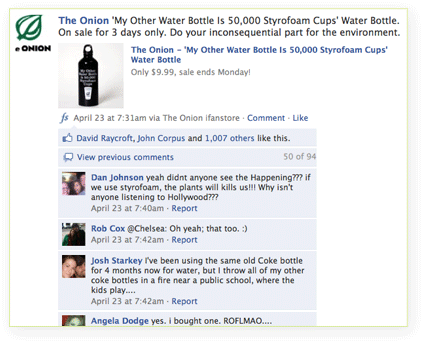 Another Milyoni component, Flexible Fulfillment, is a defined set of interfaces that allow merchants to integrate the iFanStore with their existing backend systems. This ranges from the ability for merchants to manually upload their catalogs and receive email notifications for orders, to complete integration via custom APIs.

Available in the fourth quarter of 2010, Milyoni’s Opportunity Mapping™ will be a social network application that leverages the power of Facebook’s Open Graph to tap into fan profile data and create relevant, custom offers. 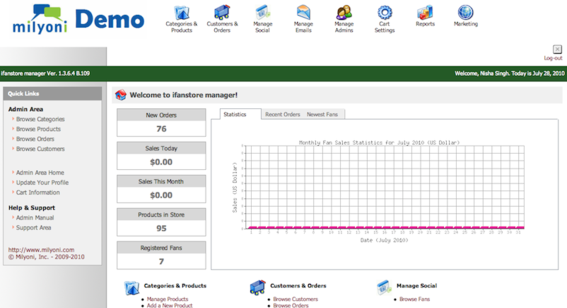 Another soon to-be-released component, called Instant Showcase, adds a new twist to the Facebook commerce buying experience in that it will allow users to purchase select products directly from the fan page Wall. Merchants will be able to select up to five products from their store catalog and post them to their Walls. Users can flip through the products, select one and submit payment without ever leaving their wall. Milyoni expects to deploy Instant Showcase in September 2010.

At about $1,000 per year, Milyoni’s platform is affordable for smaller online retailers, and the company has a number of such merchants in its portfolio. The price includes activation, monthly hosting and transaction fees. It will also help with setup and training for new merchant customers.

Better to Upload an Entire Catalog or Just Special Offers?

Not everyone agrees that uploading an entire catalog into Facebook is the wisest course of action. Alex Bernstein, managing partner with NorthSocial, a west-coast company that makes Facebook Fan page apps, is one such person. “Social media presents a great opportunity to sell products, but, as any merchant knows, there is a lot that goes into getting someone to make a purchase,” he says. “Simply moving an ecommerce cart into Facebook is not enough to spike sales.”

Bernstein suggests that making the product shareable is a key factor, as well as is having an entertaining, heart-warming, and engaging fan page where the brand interacts with fans. He also says that not all products are as well suited to a social network environment as others. “Big ticket items like cars, for example, or commodity products. Those don’t fare as well,” he adds.

Bernstein encourages merchants to think about using Facebook as a place to highlight certain products and showcase new ones. That is exactly how one smaller merchant utilizes the Milyoni platform. Cowgirl Creamery, an organic cheese business located north of San Francisco, offers weekly cheese deals to its customers via its iFanStore rather than using it to upload the entire product catalog. They post the offer to the Wall along with a question or comment to get the conversation started. 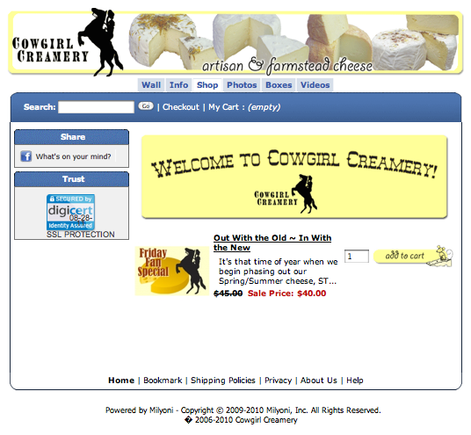 “Word of Mouth endorsements have always been our most effective marketing tool. Milyoni brought this advantage to Facebook to open new markets and sell our premium cheeses to new customers,” said Sue Conley, CEO of Cowgirl Creamery.

“Since the Conversational Commerce platform was deployed, Cowgirl Creamery has nearly doubled their fan base and increased their word of mouth marketing impact accordingly,” says Dean Alms. “In a very short period of time, dozens of new customers have bought through their Facebook store and they are reaching customers that they would have never been able to reach otherwise.”

Facebook members may not be rushing to interact with businesses. But ecommerce merchants should still have a presence there. The sheer immensity of the network mandates it. And as social commerce continues to mature and gain mainstream acceptance, merchants will benefit from it.