The National Retail Federation has estimated that overall 2011 holiday sales — brick-and-mortar and online — will grow 2.8 percent reaching some $465.6 billion compared to $453 billion in 2010.

The NRF uses a complex economic model that includes data from across the U.S. and world economies to predict home much holiday shoppers are likely to spend in the 61 days from the beginning of November to the end of December. This year’s estimate falls short of the 2010 growth rate of 5.2 percent, but does mark an increase of more than $12 billion in U.S. consumer spending. The NRF has also estimated that online sales will grow in 2011, with nearly half of all American shoppers making a purchase online and some 50 percent of 18-to-24-year olds making a purchase from a mobile device like a smartphone.

Industry pundits were mixed about whether a 2.8 percent boost to holiday sales was really good news or bad.

“I have been asked if the perspective of the holiday forecast is sort of looking at the glass half full or half empty, and I think that depending on your perspective you can take that either way. Some people are going to view this as too optimistic. Some are going to view this potentially slightly negative, but… we think that this is a very accurate prediction taking into consideration the consumer confidence issues and the macroeconomic challenges and the lingering pace of the recovery, ” NRF President and CEO Matthew Shay told financial analysts and journalists during a scheduled call October 6, 2011.

The NRF project is actually slightly higher than the ten-year average holiday sales growth rate of 2.6 percent, but that average reflects abysmal sales performance in 2008 when holiday sales fell 4.4 percent in the face of U.S. economic unrest and 2009 when sales fell an additional 0.4 percent. 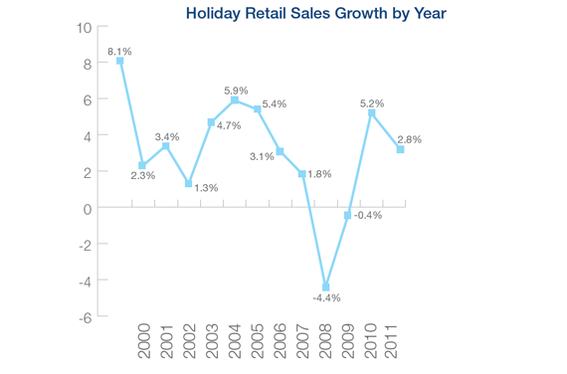 The estimated growth in 2011 holiday sales is slightly higher than the ten-year average. Source: NRF. 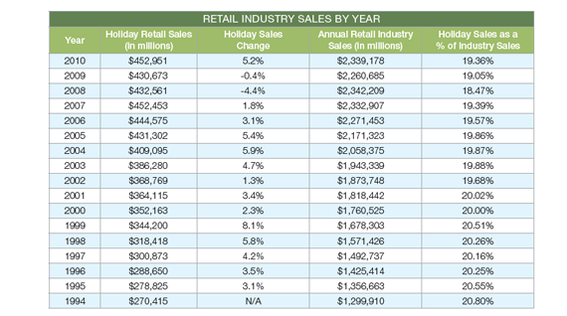 Holiday sending as a percentage of total spending has dipped slightly in the page 15 years. Source: NRF.

The NRF believes that this trend may indicate that shoppers are making holiday purchases earlier, in October for example — some 40 percent of shoppers begin before Halloween — and some consumers are not redeeming gift cards until January or February. For online merchants this trend may indicate that it could make sense to begin holiday pay-per-click marketing sooner.

“Retailers are reaping the benefits of consumers’ love of online shopping, especially during the holidays,” the NRF said in its “2011 Holiday Survival Guide.” “Last year, 44 percent of holiday shoppers made a purchase on the web – and these shoppers are particularly lucrative for retailers.”

The NRF also listed several reasons for why shoppers tend to prefer online shopping and encouraged retailers to focus on these as they market in 2011. For example, 35.1 percent of shoppers survived in a Shop.org and BIGresearch study choose to holiday shop online because of convenience, so online merchants would be wise to make the shopper experience as streamlined as possible. Likewise, some 31.5 percent wanted free shipping, which NRF estimated some 85 percent of retailers offered in 2010.